Following his discharge from the United States Army in 1918, Ralph John Viner and his wife Betty, started farming one mile south of Elliott, Iowa. Ralph was born near Henderson, Iowa, July 14, 1895, the son of Joseph Benjamin and Elizabeth Pring Viner. He attended the Henderson schools and had one year at Iowa State University before enlisting. In 1917, he married Elizabeth Florence Phillips, daughter of Thomas Daniel and Elizabeth Cady Cooper Phillips, of Henderson. Betty attended the Henderson schools, Lincoln, Nebraska High School, Simpson College, and graduated from the University of Omaha. Betty taught in the public schools of Macedonia, Henderson, Elliott and Essex. She was principal of the Wales-Lincoln High School.
Ralph farmed for several years south of Elliott, moving to town in 1924. He had a poultry business on main street until he become postmaster in 1927. After 1936, he went back to farming at Henderson, returning to Elliott in 1944, when he purchased Fortune Insurance Agency. Ralph died May 9, 1968 in Leon, Iowa and is buried at Farm Creek Cemetery at Henderson.
His community activities included his membership in the Methodist Church, Masons, Order of the Eastern Star, and the Shrine. He was secretary of the Elliott Consolidated School Board for many years. His hobbies included fishing, pinochle, basketball and baseball.
Betty participated in many community activities. She was a member of the Elliott Methodist Church and is now a member of the Leon, Iowa Methodist Church, as well as a certified Lay Speaker. She is a 50 year member of the Order of the Eastern Star and member of White Shrine. Her interest in the Iowa Federation of Women’s Clubs began in Elliott. She served as Iowa State Federation President from 1968 to 1970 and was a member of the National Board of General Federation of Women’s Clubs from 1970-1974. Betty has received many honors including the President’s Gold Medal Award for “Distinguished Service to the General Federation of Women’s Clubs” in 1974. She is listed in the World Who’s Who of Women, Vol. 4. Her hobbies include music, bridge, writing, speaking and extensive traveling.

Children of Ralph and Betty Viner:
Margaret Elizabeth Viner was born April 9, 1919 while Ralph and Betty lived on a farm south of Elliott. She attended Elliott Consolidated School and graduated in 1936. After high school she attended MacMurray College for Women graduating in 1940. She began a career of teaching in the Jacksonville Public Schools and has continued as a teacher in Belleville, Ill. In 1941, she married A. Edward Johnson and they have two daughters, Phyllis Jo Johnson married to David M. Townley, and the have two children, Jo Elizabeth Townley and John Edward Townley. Daughter Luanne Elizabeth Johnson is married to Thomas J. Dehner.
Thomas Ralph Viner, M. D. heads a 5-doctor clinic at Leon, Iowa. Born in Omaha, Dec. 21, 1921, Dr. Viner was graduated from Elliott High School in 1939, Simpson College in 1943 and the University of Nebraska Medical School in 1946. Following two years as a Transport Surgeon in the Pacific, he started practice at Leon. He received the Outstanding Citizen Award in 1978 for community service. Since 1973, he has served as a Simpson College Trustee. He and his wife, M. N., own Paradox Polled Hereford Ranch which has had one state champion bull and one class winner at the Denver Stock Show. Son, Thomas Frederic (Fritz) Viner is a Ear, Nose & Throat Specialist at Towncrest Clinic at Iowa City. He and his wife, Cherie (Johnson) have two daughters, Mena and Nellie. Daughter Martha Viner Hill and husband, David, live in Knoxville, Iowa and have sons Benjamin and Joshua. Son, John Phillip Viner is an Internal Medicine Specialist and he and his wife, Terri Terril, live in Dubuque. Daughter May Viner Johnston and husband, Jim, and daughter, Cady, live in Leon and are associated with Paradox Polled Herefords.
Phyllis Ann Viner was born in 1923 on Nov. 22. She graduated from Elliott Consolidated Schools in 1941. She attended Simpson College for two years, leaving college to work for Missouri-Pacific Railroad Co. for two years. She graduated as a registered nurse from the University of Nebraska Hospital in Omaha and received a B. S. degree. Phyllis married James N. Sherrick Dec. 21, 1947 in the Elliott Methodist Church. To this marriage three children were born: Elizabeth Ann Sherrick and her husband Stephen Liebenow have a son, James. Son John David Sherrick and wife, Marcia Schaefer Sherrick have daughter Holly Sherrick, son David Sherrick. Son Richard Dean Sherrick and wife, Sue Lewandoski have a son, Bryan Michael. Phyllis Ann passed away Aug. 24, 1966, and is buried at Villa Grove, Illinois. 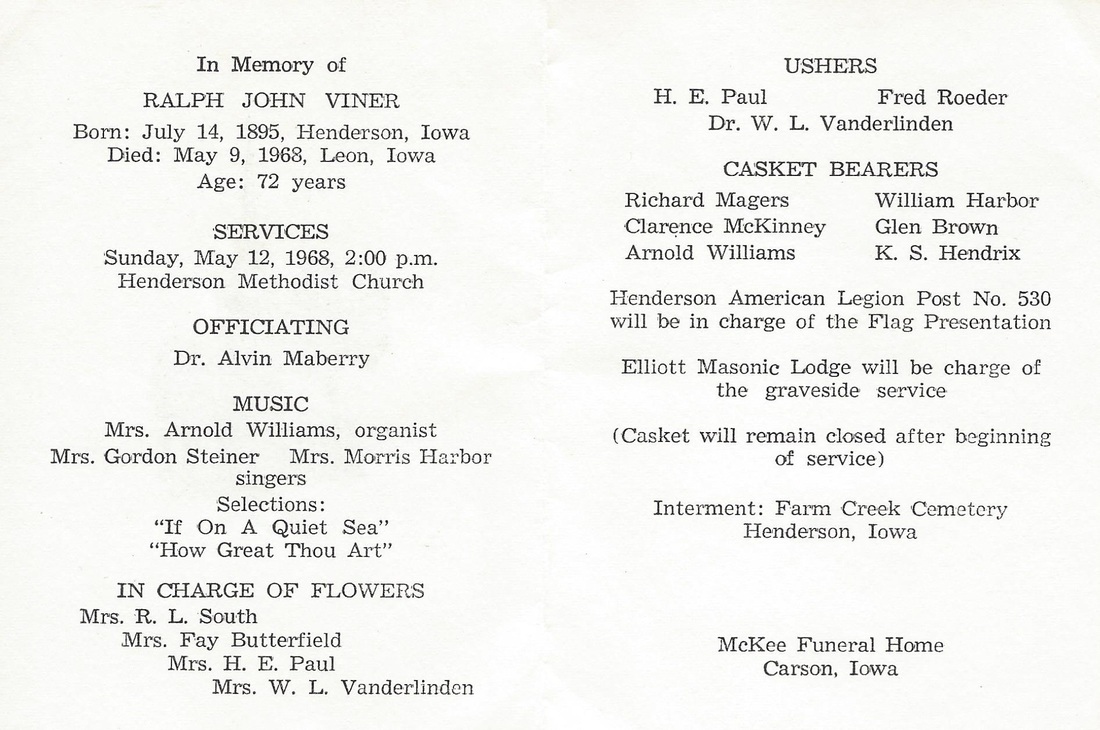 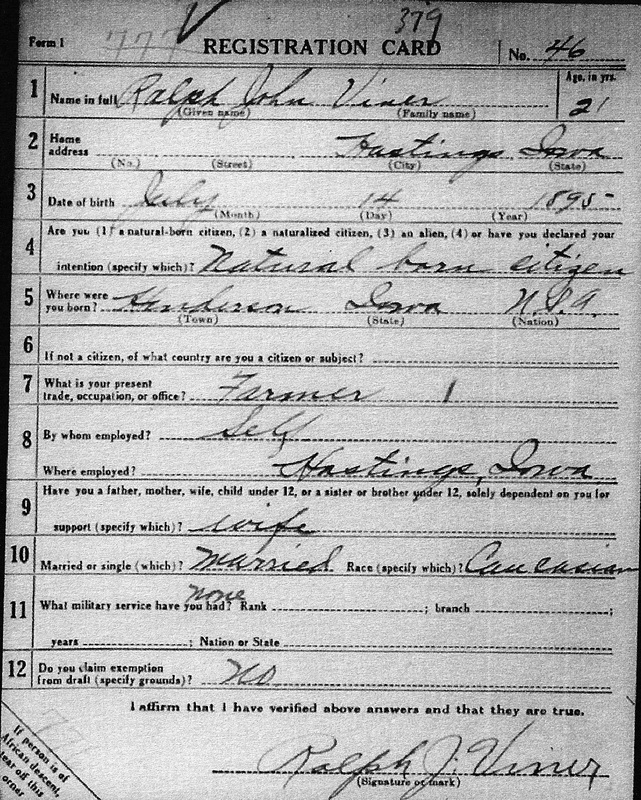 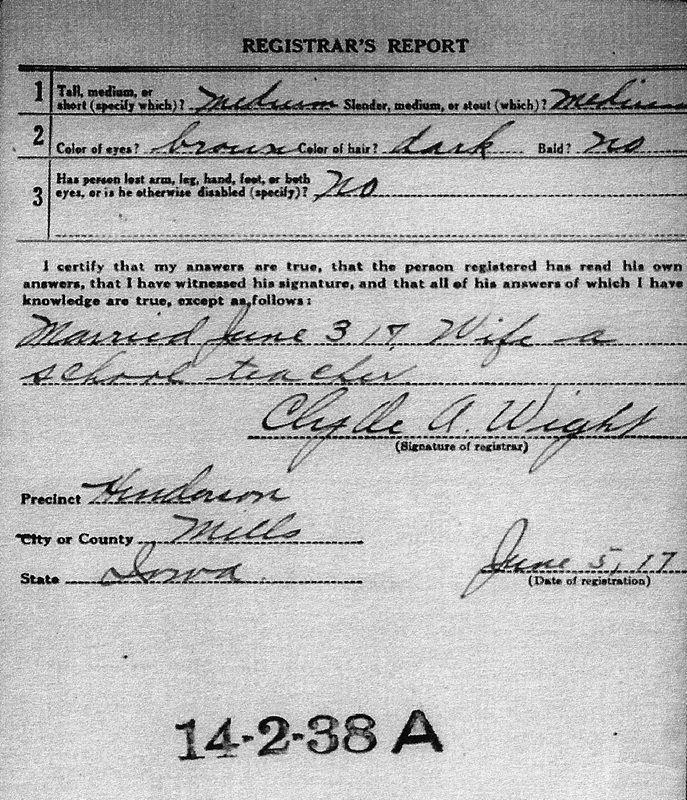