The business meeting was called to order by Bill Harbor due to the absence of President Agnes Workman. Jo Ann Houser gave the Treasurer’s Report. A balance of $261.65 was reported. The secretary read the minutes, which were approved. A motion was made and carried to pay all outstanding bills turned into the Treasurer.
The Nominating Committee nominated the following officers for the coming year:

Dinner was served by the Christian Ladies Aid. There were 157 plates paid. The program was carried out with a circus theme with clowns, balloons, etc. Jack Fickel served as Master of Ceremonies. 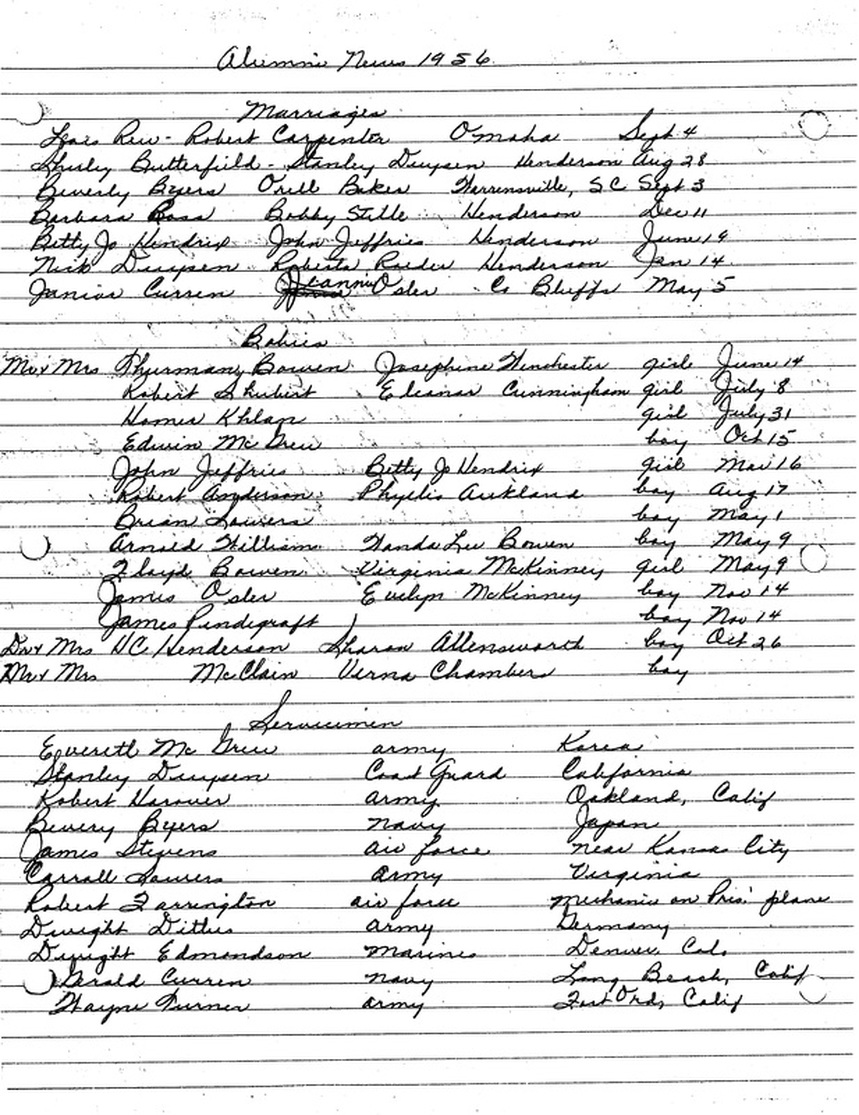 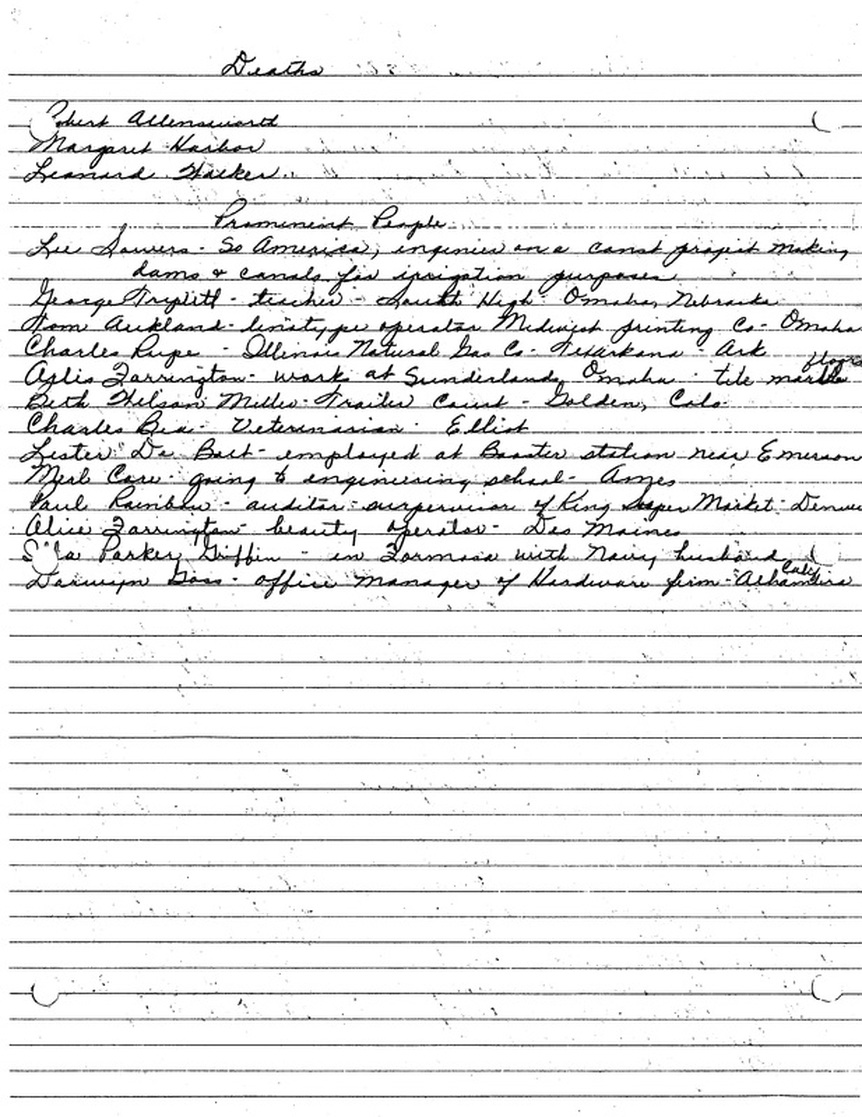 The business meeting was called to order by President Norman Winchester. Jo Ann Houser gave the secretary and treasurer’s report – both were approved as read. A motion was made and carried to pay all outstanding bills. It was brought to the people’s attention by Bill Harbor that we needed more group participation in putting on the banquet.
The nominating committee named the following officers for the coming year 1958:

Dinner was served by the Christian Church. There were 124 plates paid. The program was carried out with an Indian theme with the Macedonia Cub Scouts presenting an “Indian Pow-Wow” as the climax of the evening. Bill Harbor served as “Master of Ceremonies.” A motion was made and carried to close the 1957 business meeting.

The Executive Committee of 1958 Henderson Alumni met and the following committee members were chosen: 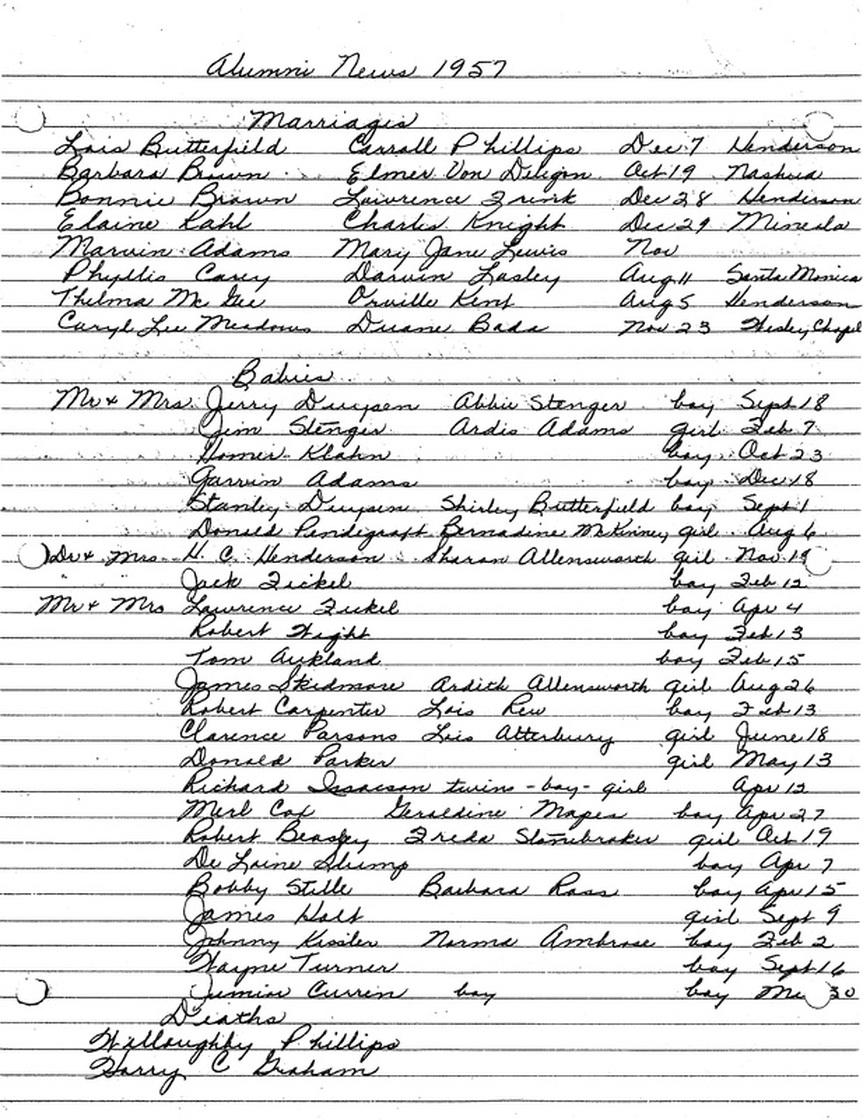 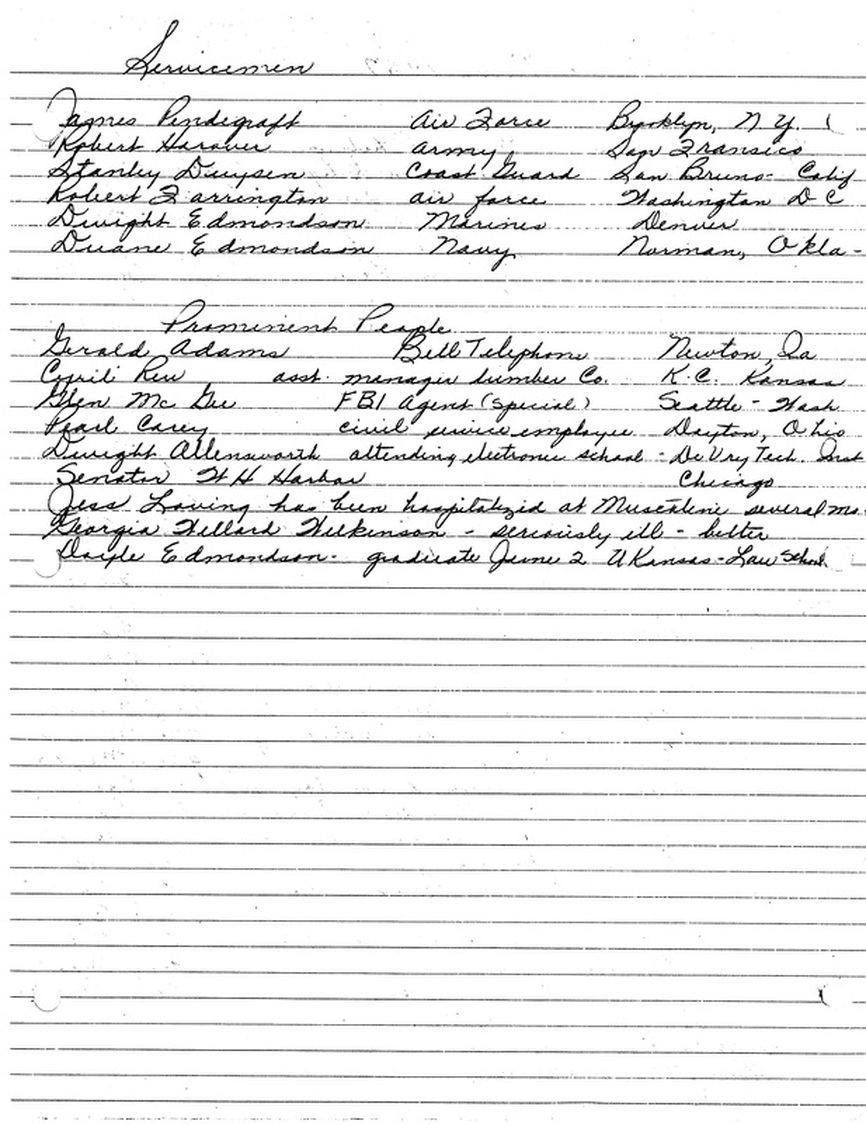 The 43rd annual banquet of the Henderson Alumni Association was held Friday, May 23, at the school gym. The Methodist WSCS served 172 alumni and guests.
Bill Harbor was Master of Ceremonies. The Welcome to the class of 1958 was given by Nancy Wallace (Class of ’57) and the response by Lois Meadows.
C.E. Wilson presented an autographed copy of his book of poems to Lois Meadows. This is an annual award from Mr. Wilson to the best English Student in the class.
Glen McGee of Glenwood presented the citizenship award of the Iowa State Bar Association to Nancy Terry. Nancy was selected by the faculty for character and citizenship.
The Alumni News was read by Jo Ann Houser as Ruby Godfrey was not present.
The business meeting was conducted by H. E. Paul, President. The minutes of the 1957 meeting were read and approved. A motion was made and carried to pay all outstanding bills. The Treasurer reported a balance on hand of $232.37.
The nominating committee named the following officers for the coming year 1959:

No other business on hand the meeting adjourned.
The program theme was “An Evening of Television,” which opened with a news broadcast followed by scenes from “Gunsmoke,” the “$64,000 Question,” “Ed Sullivan’s Variety Show,” Boxing and “This is Your Life.”
A.P. Phillips was the subject of “This is Your Life” and was very surprised. Very original commercials were given with each show. Mrs. Lucille Byers wrote the script and directed the show. Following the program, the floor was cleared for dancing. An orchestra from Offutt Air Base furnished the music and Don Allensworth called for the square dance. 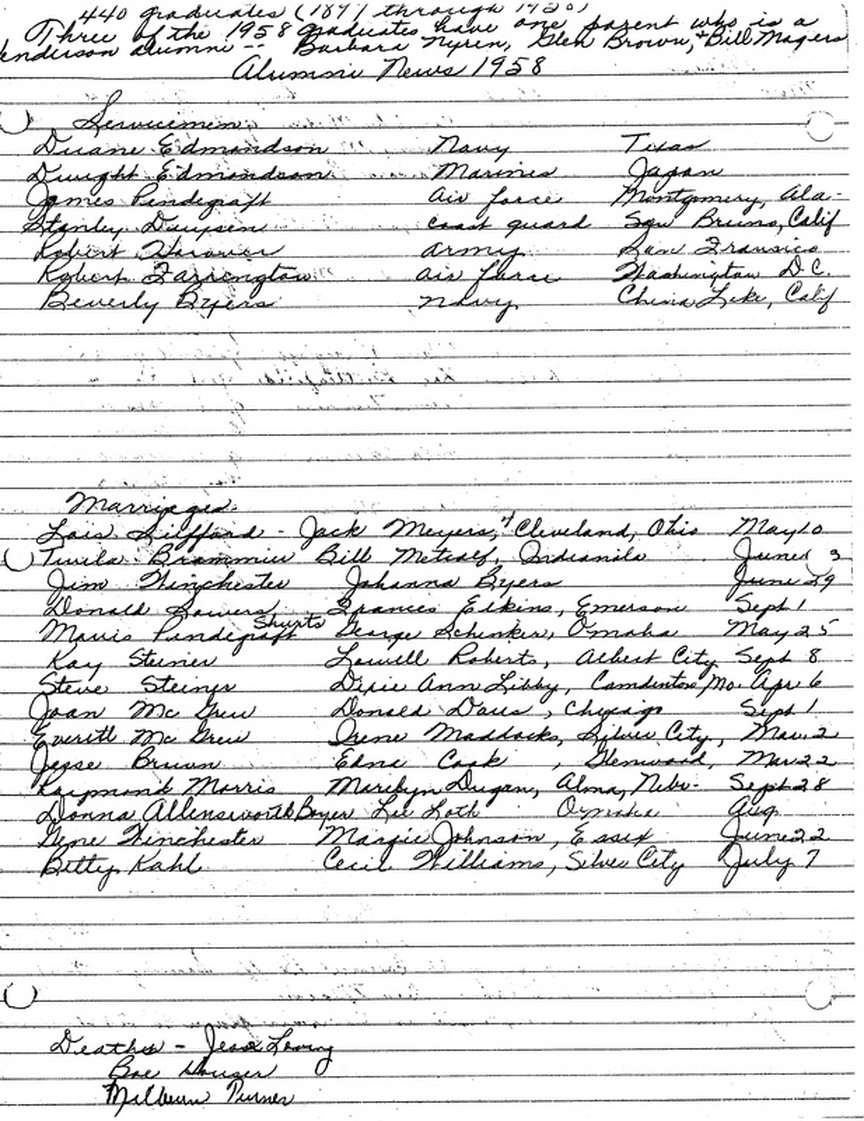 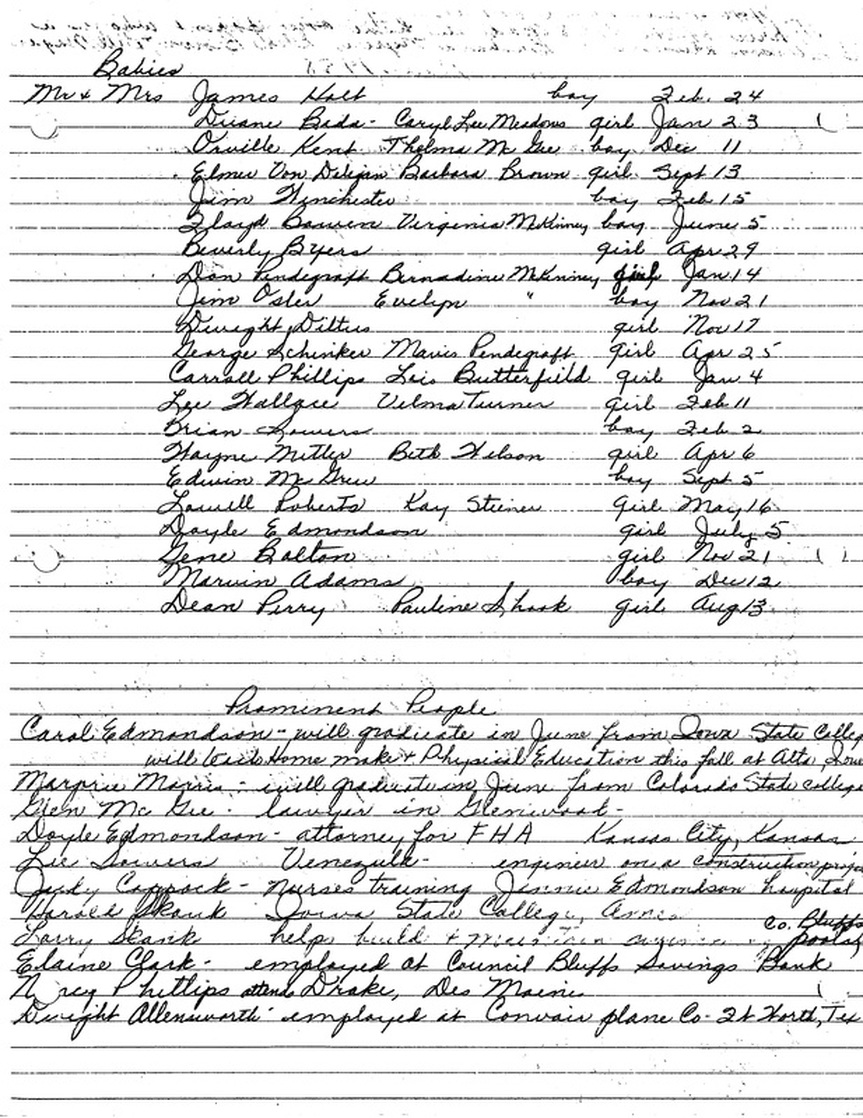 The 44th annual banquet of the Henderson Alumni Association was held Friday, May 29th at the school gymnasium. The dinner was served by the Christian C.W.F. There were 151 paid plates.
Mrs. Ralph Viner acted as Toastmistress. The alumni news was given by Ruby Godfrey. The seniors were welcomed into the alumni association by Wanda Williams and the response was given by Carol Asell, after which each of the seniors was introduced by Mr. Hudtloff, the Superintendent. A book of poetry by Claude Wilson was present to Norma McGee for the best English grades of the years.
The business meeting was conducted by the President, Don Parker. The minutes of the 1959 meeting were read and approved. A treasury report showed a balance of $193.82. The motion was made and seconded that all bills be allowed and paid.
The nominating committee named the following officers for next year:

The new officers were approved and a motion made and carried to adjourn.
Program theme was a Calypso Carnival which featured short musical numbers and selections by members of the school band. 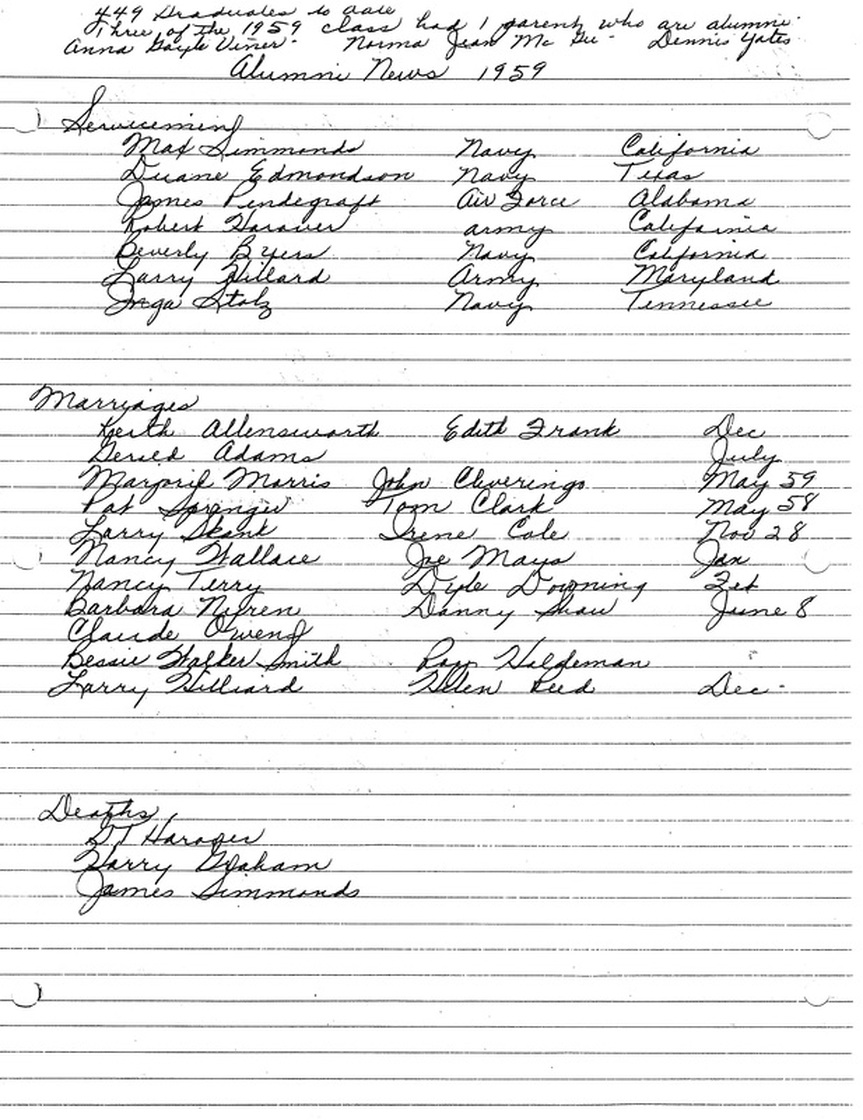 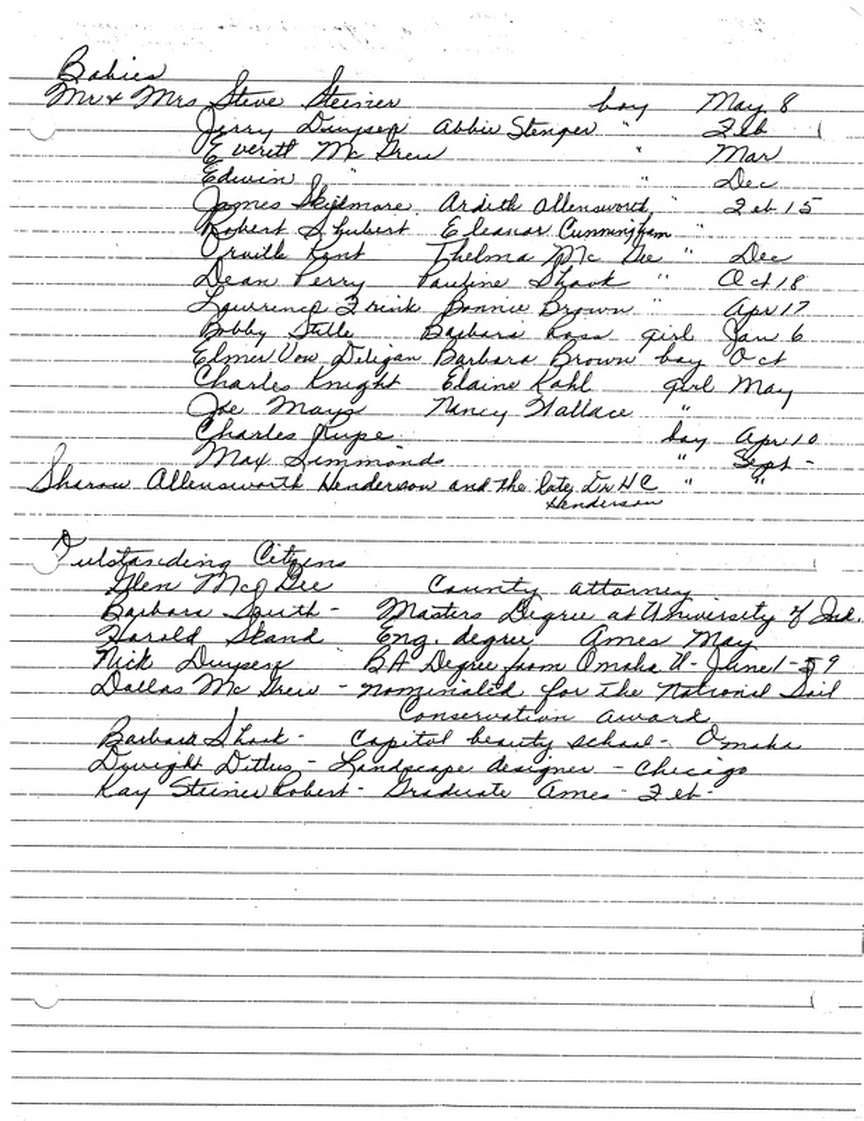 Minnie Allensworth reported a balance of $138.72 in the treasury.
Ruby Godfrey, Historian, reported alumni news. This year’s class of ten brought to 459 the total number of graduates from the Henderson High School. Members of the Class of 1960 are Ralph Cole, Robert Fleming, Judy Harold, Robert Magers, Doris Morris, Alice Rieken, Bonnie Siefford, Lewis Steiner, Velda Wallace and Richard Wiegman.
This will be the last class to graduate from the Henderson High School as the Henderson Consolidated District will become a part of the Nishna Valley Community District with the high school at Emerson.
The program theme “Thru the Years” featured songs and styles from 1897 to 1960. Deloma Allensworth modeled a dress of the 1900 period and Darlene Bolton wore a wedding suit of 1910. Dallas and Helen McGrew sat on a park bench and reminisced of 1910 and Lora Mae Parker and Ruby Godfrey sang “Dearie, Do You Remember When –“. Bud and Lucille Byers did the Charleston in costumes of the “Roaring 20s.” A quartet, Lewis Steiner, Don Parker, Jerry Duysen and Don Pendegraft, sang several numbers. Larry Skank sang “Coming In On a Wing and a Prayer,” of World War II period. Floyd Bowen pantomimed Elvis Presley and the beatniks appeared for the 1950-60 period. Don Parker sang “Around the World” and the audience joined Betty Jefferis and Judy Magers in “May the Good Lord Bless and Keep You” to close the program. Dancing followed with music by an Omaha dance band. 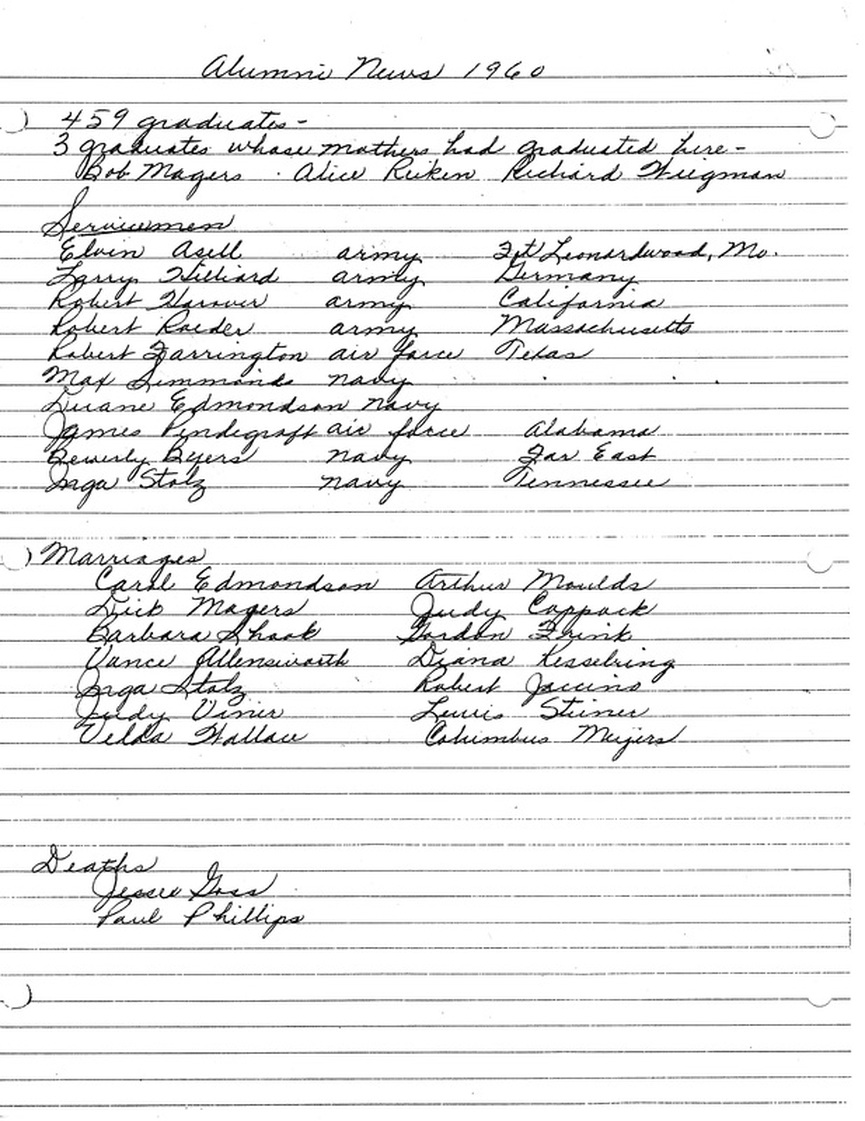 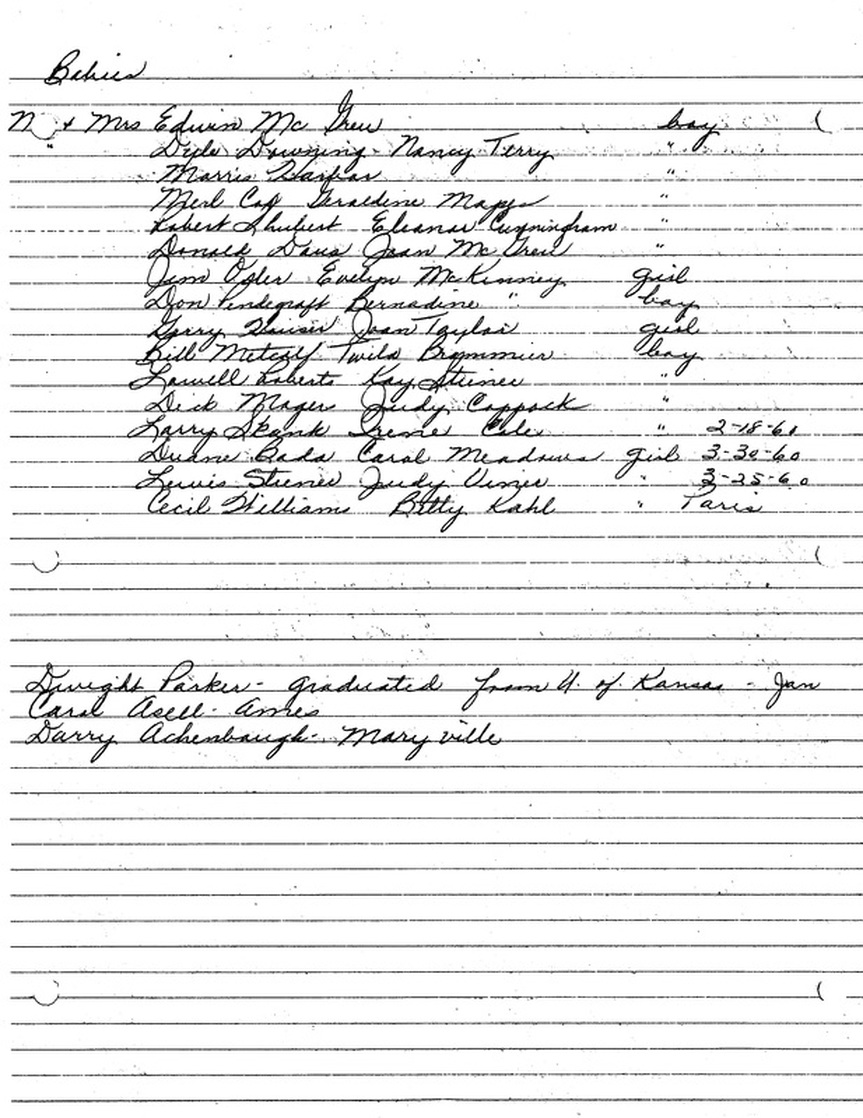