The 81st Annual Henderson High School Alumni Banquet was held on Saturday, May 25, 1996 at the Little League Gym. Eighty-three members and guests signed the register. The Iowa Sesquicentennial theme was carried out in table decorations and Program. Prior to the dinner, the exceptional NV Jazz Band entertained everyone. We very much appreciated Mr. Craig Crilly, director, and his talented band coming to share their talents with us.
The local Little League ladies and gents then served a delicious ham buffet dinner. Thanks to all of them for all their hard work. You did a good job.
President Bill Harbor then introduced Mr. Allen Wortman, long-time editor of the Malvern Leader and friend of Mills County History. He shared a number of interesting stories pertaining to Henderson and our part of the County. Bill invited Betty Kahl Williams to come and relate her “awesome” experience of carrying one of the relay torches headed for the Olympic Games in Atlanta this summer. It was a real thrill for her. We enjoyed hearing her story and seeing the beautiful torch she carried. Some of our friends from nearby Macedonia came in their pioneer dress and told about the upcoming Mormon Wagon Train that will be coming to the area on July 11. We enjoyed hearing their story of their plans.
President Harbor then opened the business meeting. The minutes of the 1995 meeting were read and approved.
Ruby Godfrey then shared her interesting Historian’s Report.
Jerry Duysen gave the following Nominating Committee Report:

These persons were elected by acclamation.
Bill began the Roll Call of Classes with 1925. It was represented by Minnie Gravett Allensworth. Attending from the 60-year Class were Ivan Houser of Massena and Vera Skank from Carson. The Class of 1946 was well represented. Those present were Jim Holt of Knoxville; Pearl Cary of Richmond, Virginia; Eleanor Cunningham Shubert of Derby, Kansas; Marian Turner Core of Macedonia; Janice LeRette Palmer of Bloomington, Illinois; Wendell Harold and Phyllis Aukland Anderson, both of Red Oak; and Leo Boileau of Henderson. Those unable to be present were Marian Harbor Butler and Arliss Farrington, both of Omaha. They reported they had all enjoyed having lunch together in Red Oak at noon and were joined there by two former teachers, Ruth Hornbuckle and Maurine Thomas.
With no further business after the Roll Call, the meeting adjourned. A time of visiting was enjoyed. 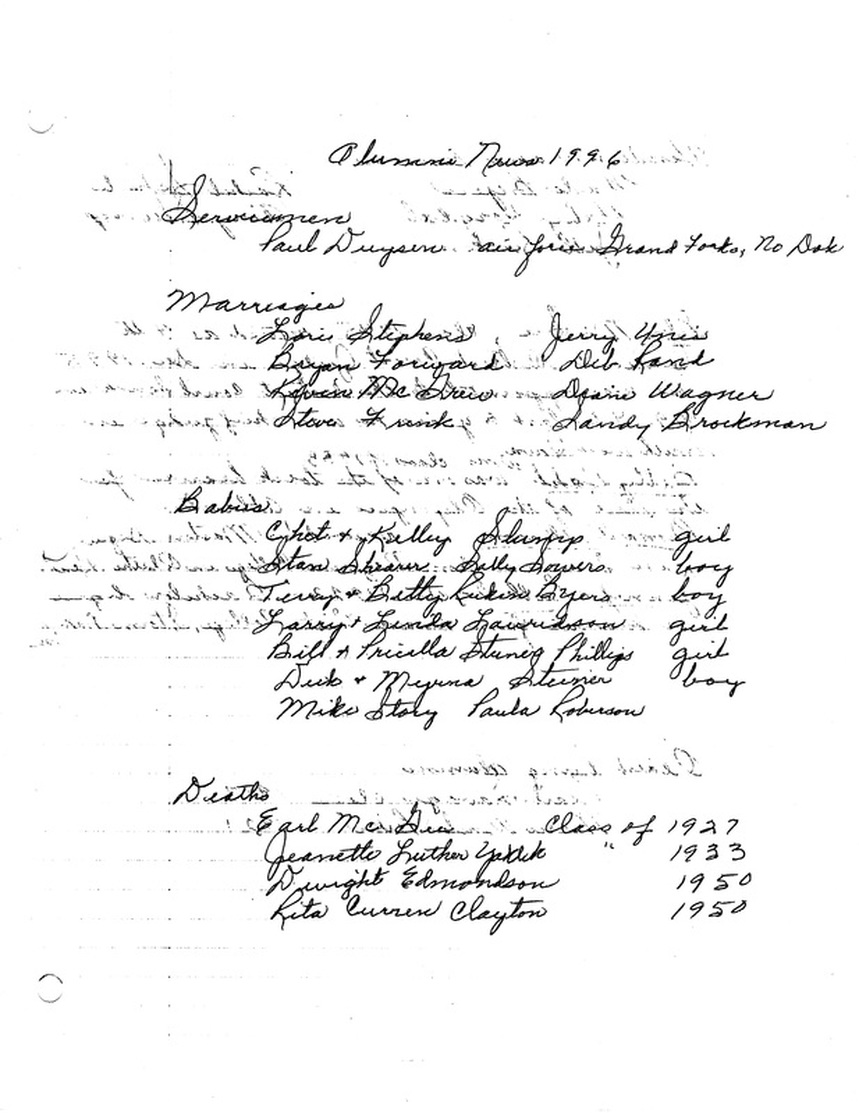 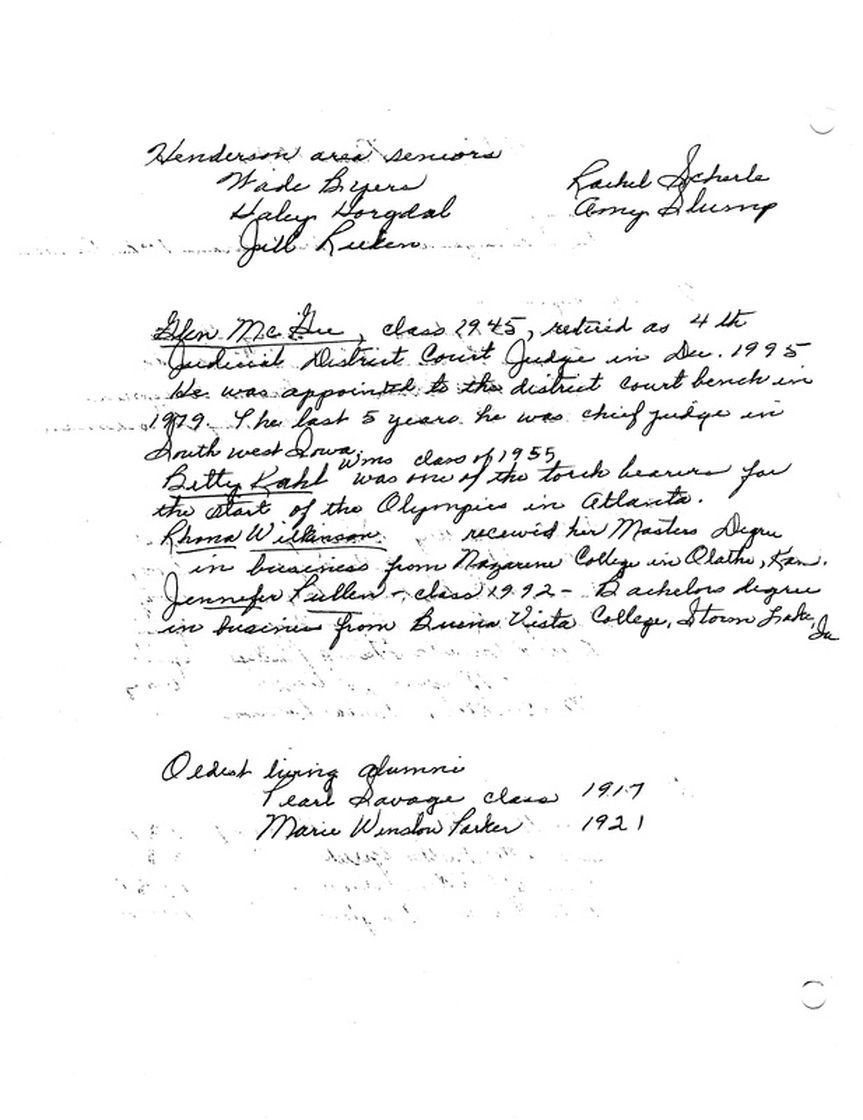 The 82nd Annual Henderson High School Alumni Banquet was held at the Little League Gym on Saturday, May 24, 1997. Sixty-four members and guests were present to enjoy a delicious ham buffet meal prepared and served by ladies and gents of the local Little League. They do a fine job and we appreciate all their time and work.
The invocation was given by Bill Harbor. Harry Paul introduced Randall Moore of Red Oak, the only one present from the 50-year Class. He spoke briefly thanking all for putting the Banquet together. Judy Coppock Magers and Nancy Wallace Van Pelt were the two from the 40-year Class. They spoke briefly of other members unable to be present. A number of mementoes highlighted their table.
Harry began the Roll of Class with 1925. We were pleased to have Minnie Allensworth with us to represent this Class. He continued with the Classes until everyone was recognized.
President Steve Steiner opened the business meeting. The minutes of the 1996 Banquet were read and approved. The Treasurer reported we began the year with $253.11. The Nominating Committee was unable to name a President or Vice-President for next year, so nominations were opened from the floor. As a result, Judy Magers was named President and Nancy Van Pelt Vice-President. They were elected by acclamation. Ruby Godfrey then shared her interesting Historian news. She also brought some ads from a July 1926 issue of the Malvern Leader to show. They were ads of Henderson merchants, so were interesting to read.
After the meeting adjourned, Merl Core told of some of his experiences and working with the lab that produced and manufactured uranium in Ames. We enjoyed hearing stories of some of his life’s work. At the conclusion of the meeting, all enjoyed visiting together. 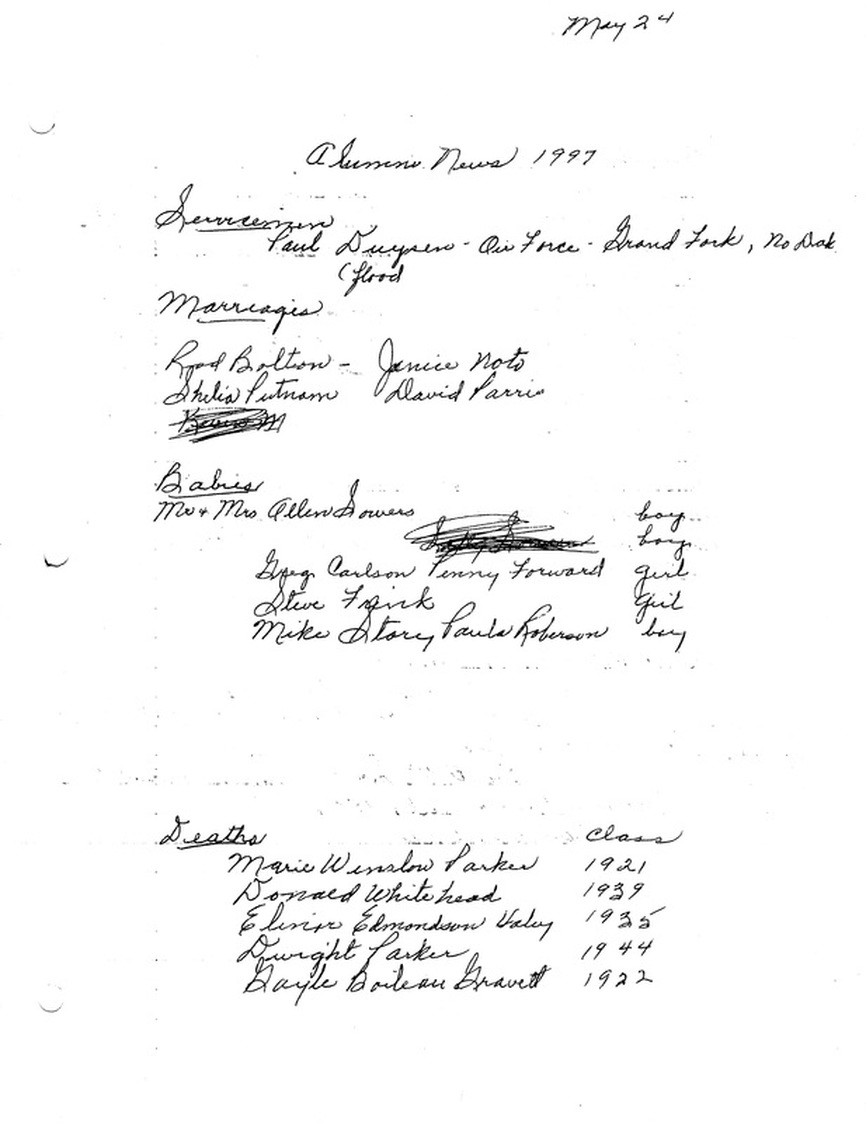 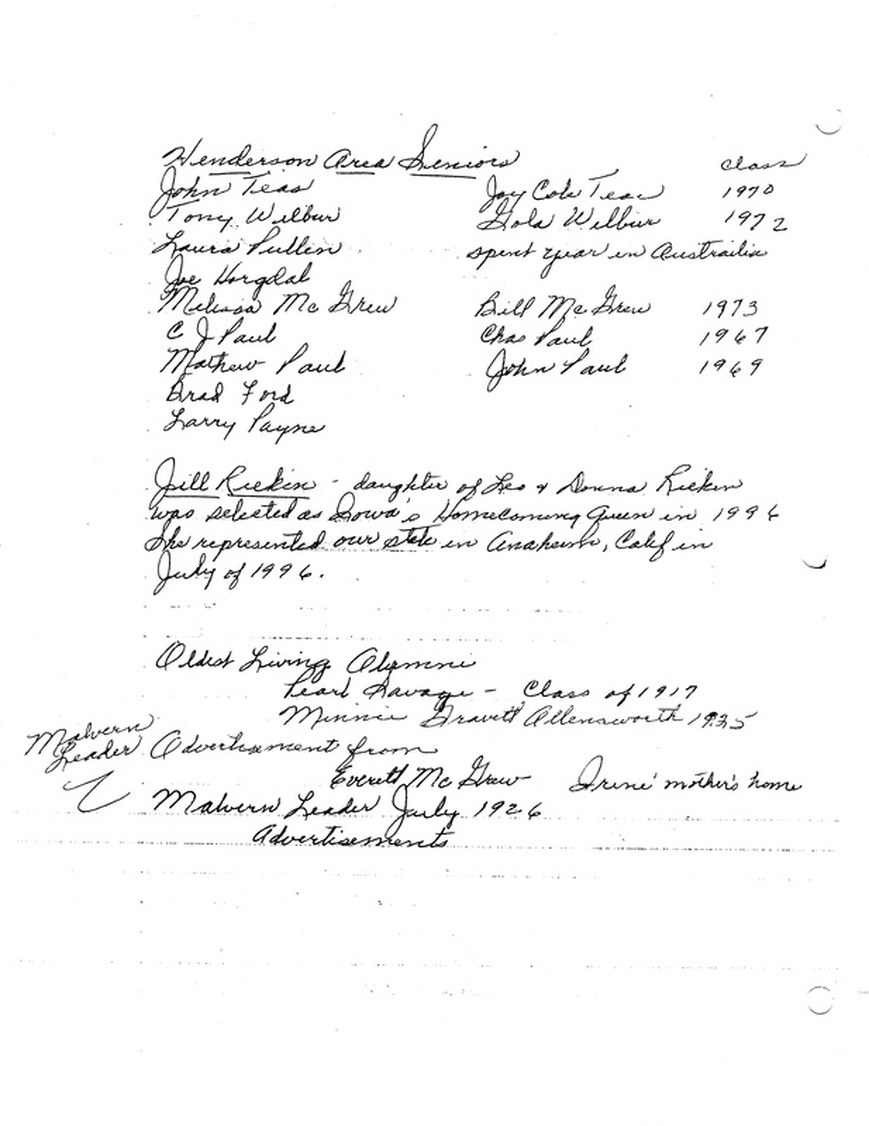 The 83rd Annual Henderson High School Alumni Banquet was held at the Little League Gym on Saturday, May 23, 1998 at 7:00 p.m. President Judy Magers invited the 68 members and guests to be seated as desired. After the invocation by Wanda Williams, they were served a delicious ham buffet dinner by the local Little League ladies and gents. They were given an ovation for doing such a great job as usual! We appreciate their time and effort!
After the meal Judy welcomed everyone. The minutes of the 1997 Banquet were read and approved, as well as Treasurer’s Report. There was no old business.
LaDonna Stephens, member of 40-year Class, submitted the following slate of officers for the coming year:

In turn, they were elected by acclamation.
Judy then proceeded with Roll Call of Classes. Sy Brown, representing the Class of 1930, was celebrating his 86th birthday that day. Congratulations, Sy! Present from the 60-year Class were Harry Paul, Beatrice Springer Buffington and Bernice Springer Copeland. We were sorry Bill Harbor was hospitalized. He almost never is absent. Hope he’s better real roon. Representing the 50-year Class 1948 were Max Simmons of North Dakota; Bryan Sowers, Henderson; Norma Allensworth Winchester, Carroll; Evelyn McKinney Osler and Jim Stenger of Springfield, Missouri. He spoke briefly of some school experiences and teachers – appreciation for all of these valuable school memories. Norma brought a basketball knee guard as a memento. Four members were present from the 1958 40-year Class. They were Nancy Terry Downing of Glenwood; Lois Meadows Murray, Bentonville, Arkansas; Ladonna Ross Stephens and Bud Brown, both of Henderson. Nancy spoke briefly on their behalf. Judy completed the Roll Call.
Providing some fun entertainment were seven ladies of the “Boot-Scootin’ Grannies” group of line dancers from Council Bluffs. Some of the audience even tried their hand—and feet—at it. We weren’t too well coordinated, we found! We enjoyed them, however. Thanks to Elizabeth Edmondson for bringing the picture display. It’s always enjoyed.
After the meeting was adjourned, time was spent visiting. 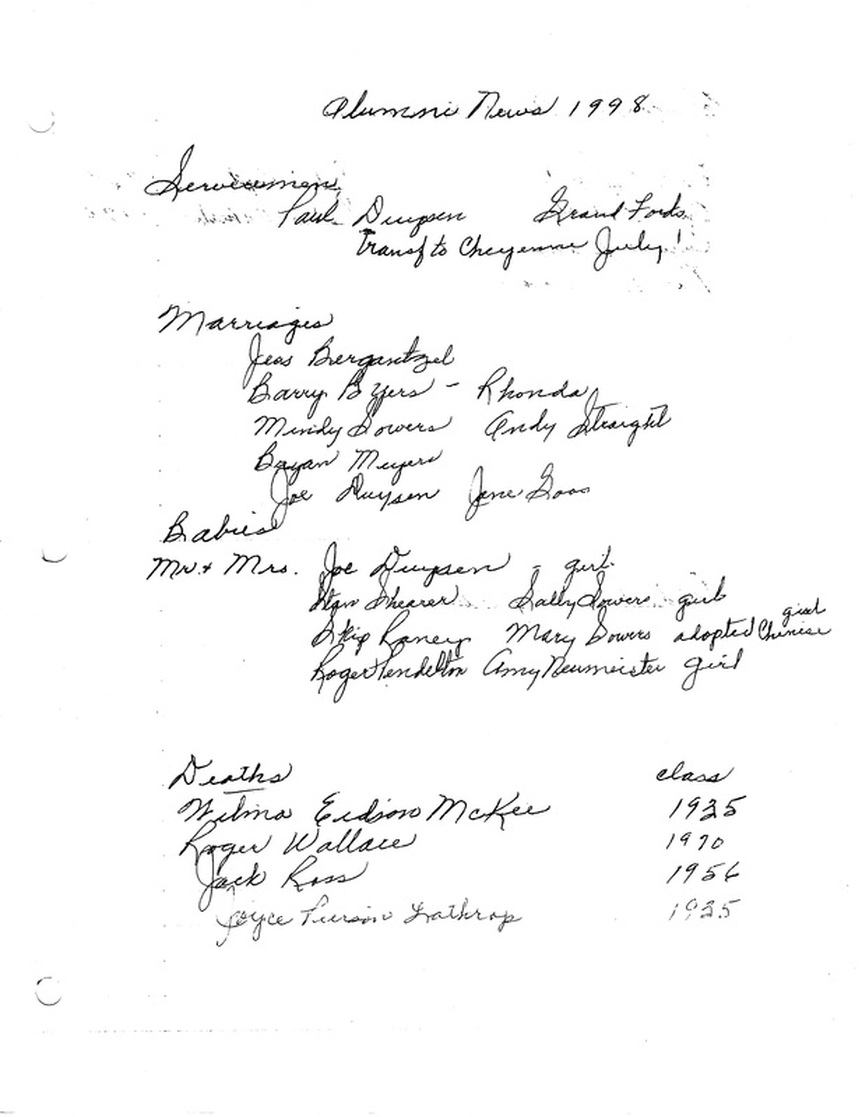 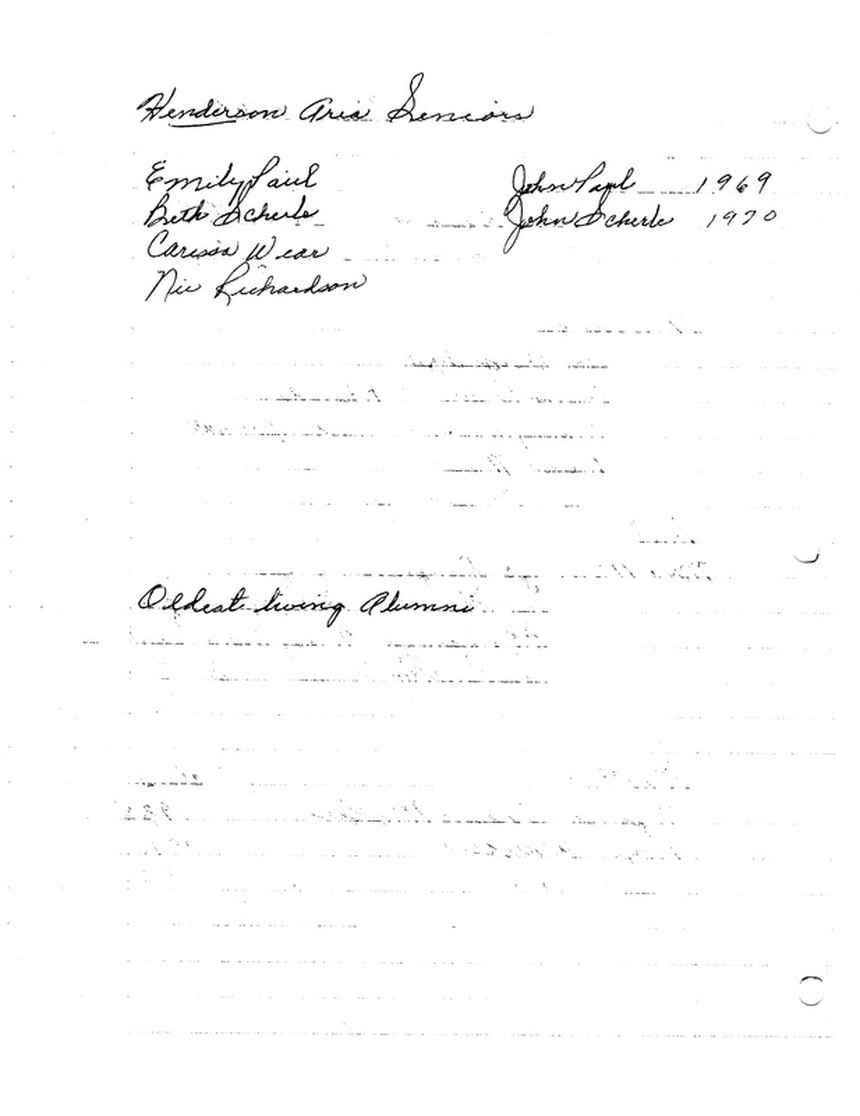 The 84th Annual Henderson High School Alumni Banquet was held at the Little League Gym on May 29, 1999. President Everett McGrew invited the 78 Alumni present to be seated. Jerry Duysen gave the invocation prior to the buffet ham ball supper. The meal was prepared and served by the Little League ladies and gents. We thank them for doing such a great job. We know it is lots of work.
After the meal we were treated to a Program by the Silver Creek Cloggers, headed by Fred Techau. We all enjoyed the energetic performance by the adults and the three girls. Thanks for coming!
Everett welcomed everyone for coming. The Minutes of the previous Banquet and the Treasurer’s Report were given. They were approved as given. We thanked the Little League for the delicious meal, and Jamie Slump and family for leaving the tablecloths from her graduation reception the previous night – and having the tables and chairs down.
The following slate of officers were presented by Abbie Duysen:

Motion made by Betty Raney, seconded by Harry Paul, that they be elected. Motion carried.
Ruby Godfrey gave her Historian’s Report along with some interesting Alumni trivia gleaned from some Programs of past years. She has been in that office for 45 years! That’s a long time!
Everett called the Roll of Classes with Max Stonebraker being the oldest from the Class of 1931. He is a faithful Alumni to attend. Representing the 1939 60-year Honor Class were Annie Jane Springer Gilson and Les DeBolt. The 1949 50-year Honor Class was represented by Mavis Pendegraft Lee, Pauline Shook Perry, Mary Kempton Elwood, Chuck Stevens, Donna Allensworth Loth, Dwight Allensworth, Lois Butterfield Phillips, and Verna Lea Chambers McClain. Mavis came forward and introduced her fellow classmates that she had contacted to come. Present from the 1959 40-year class were Norma Jean McGee Hackett, Delbert McVay, and Geri Hilliard O’Dell. Coming farthest was Dwight Allensworth from Albuquerque and Bonnie Frink the closest.
The meeting was adjourned for folks to continue their visit. 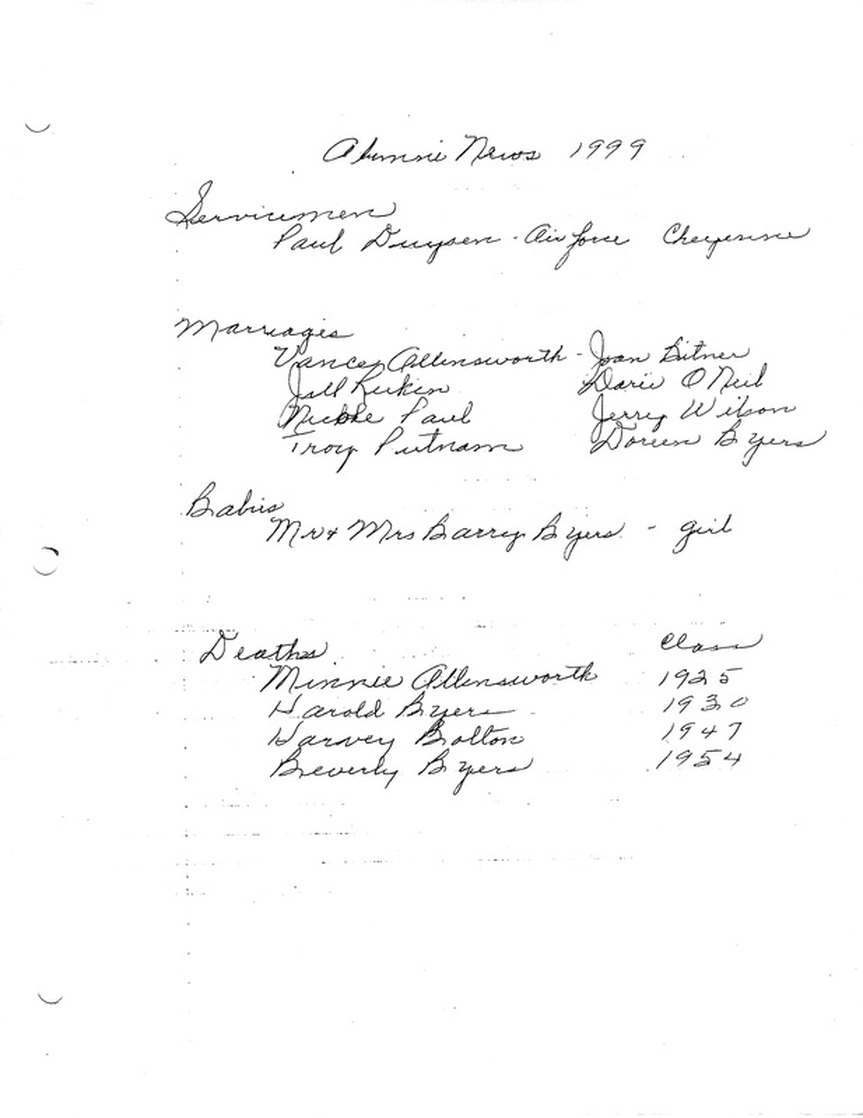 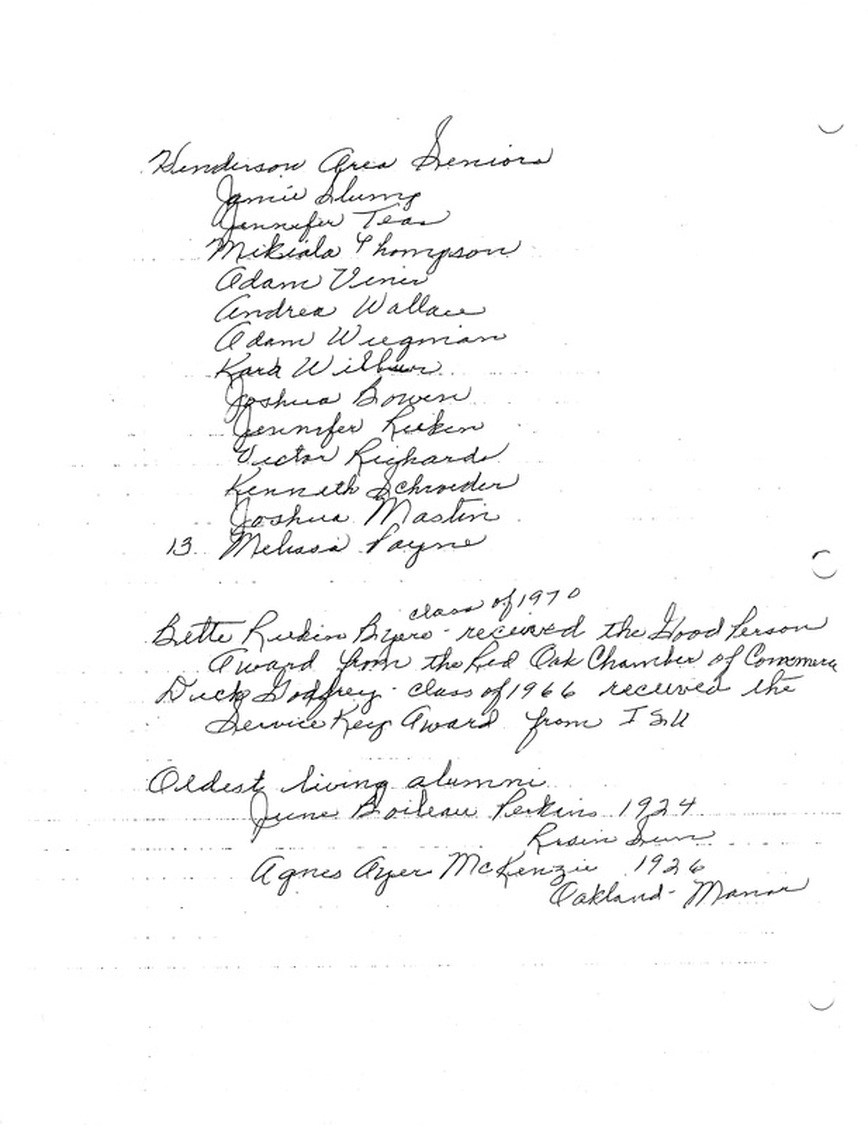 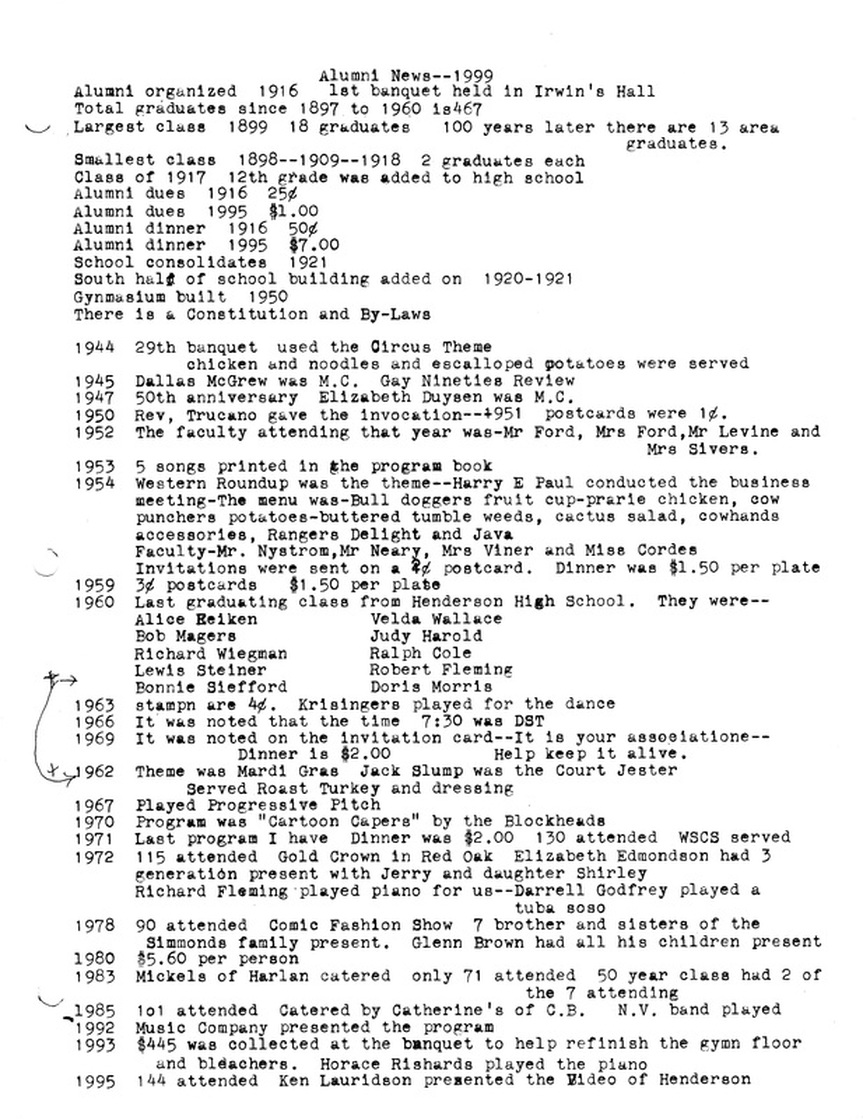 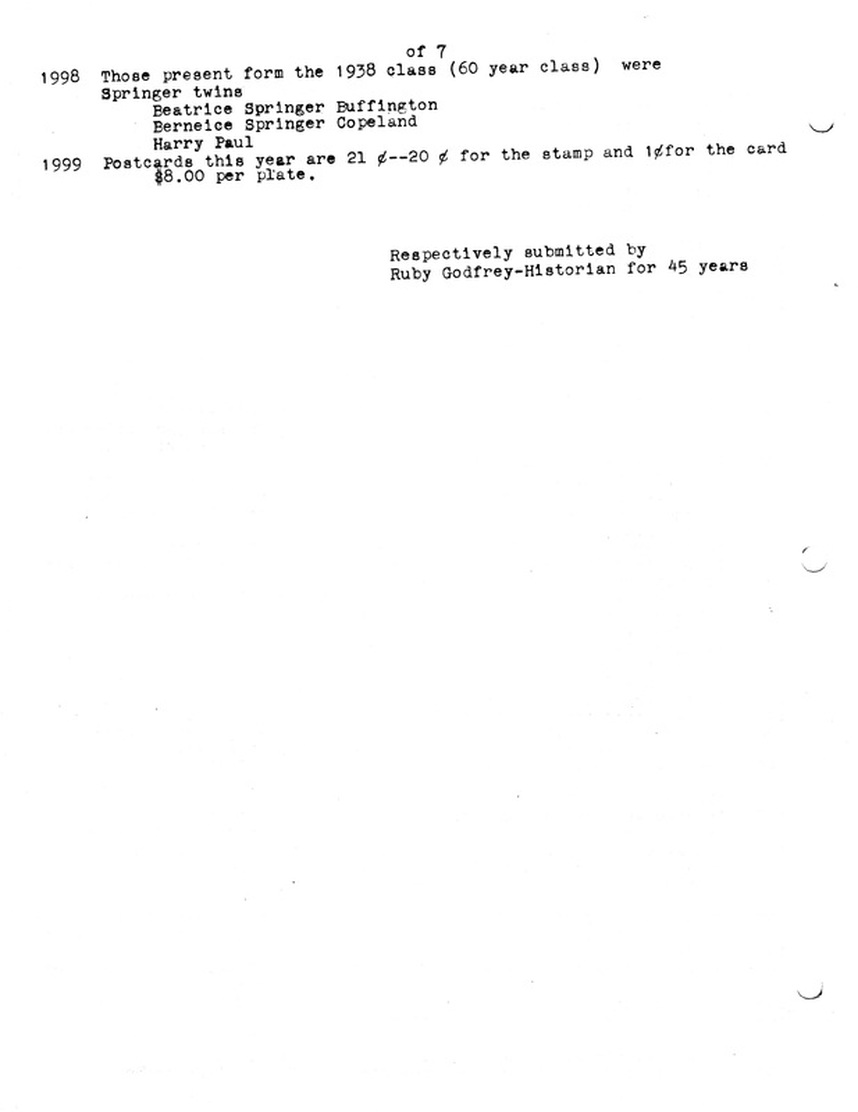 The 85th Annual Henderson High School Alumni Banquet was held at the Little League Gym on Saturday, May 27, 2000. Vice-President Barb Frink, in the absence of President Louie Farrington, greeted everyone and invited them to be seated with fellow classmates, if desired. After the table Grace given by Barb, all enjoyed a delicious roast beef buffet dinner catered by Peg’s Catery of Stanton.
After all had eaten Barb opened the meeting with “Thanks” to Peg, and also the local young girls, Jolene Frink, Jodi Rieken, and Leah McGrew who did a great job of serving as waitresses for the dinner; she then began the Roll Call of Classes. We were pleased to have Max Stonebraker of Glenwood to represent the 1931 Class. Elizabeth Sutton Edmondson was from 1932, and Jesse Brown, 1934. Four men were present from the 1940 60-year Honor Class. They were Virgil Harold of Albuquerque (his daughter and husband, Vicki and Dennis Gereaux of Colorado were present), Merl Core of Ames, Wade Freeman of Clarinda, and Don Allensworth of Macedonia. Virginia McKinney Bowen of Hastings was the only one present from the 1950 50-year Honor Class. From the 1960 40-year Class were Velda Wallace Myers of Macedonia and Robert Fleming of Lincoln.
Minutes of the 1999 Banquet were read and approved; likewise with the Treasurer’s Report. It was discussed raising the cost of the meal, thus having additional funds to work with. Motion made by Robert Fleming, seconded by Stan Harold, to increase price for dinner and dues to $10 each. Motion carried. It was also suggested that one person contact their classmates to encourage their attendance. Harry Paul distributed papers telling about the number of plats at Farm Creek Cemetery that have not been used for many, many years. It is hoped some could be reclaimed for current use.
Polly Perry presented the slate of officers for the coming year. Nominated and elected were:

We were asked if we would care to purchase a brick (with Alumni name) for purpose of raising funds for play-group equipment at NV. With no comment, motion not made.
Ruby Godfrey shared several interesting Historian items.
Barb thanked the ladies who baked cakes for the dessert, the girls who were waitresses and the donation of pansies for decorations by Joanie Houser of Mother Earth. Jerry Duysen concluded the evening by leading the singing of the “Henderson School Song.” The rest of the time was spent with old-fashioned visiting. 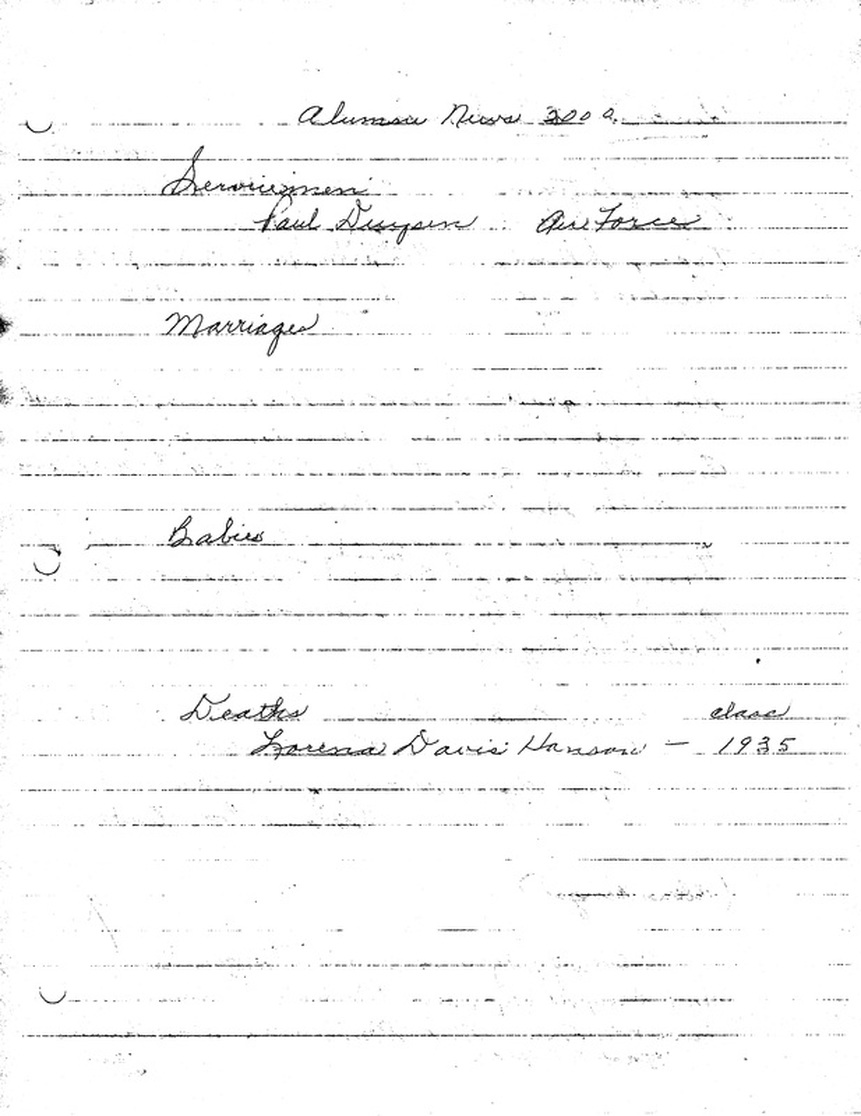 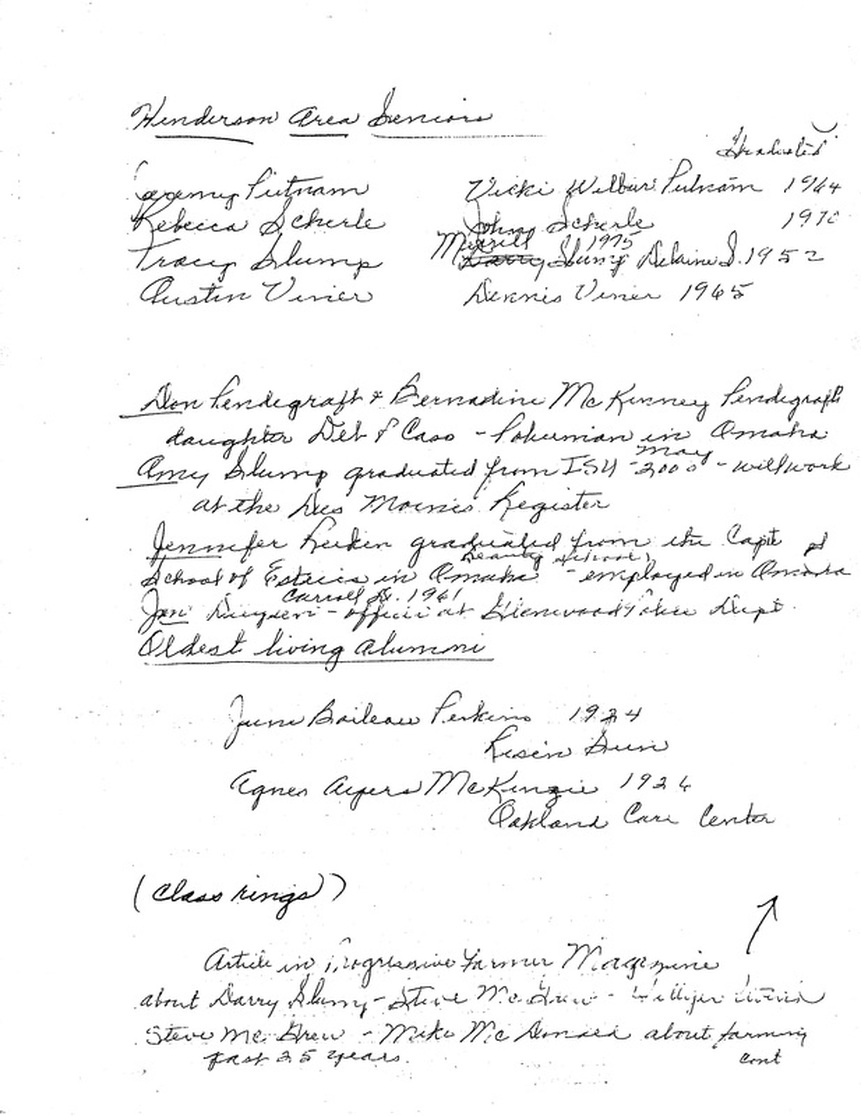 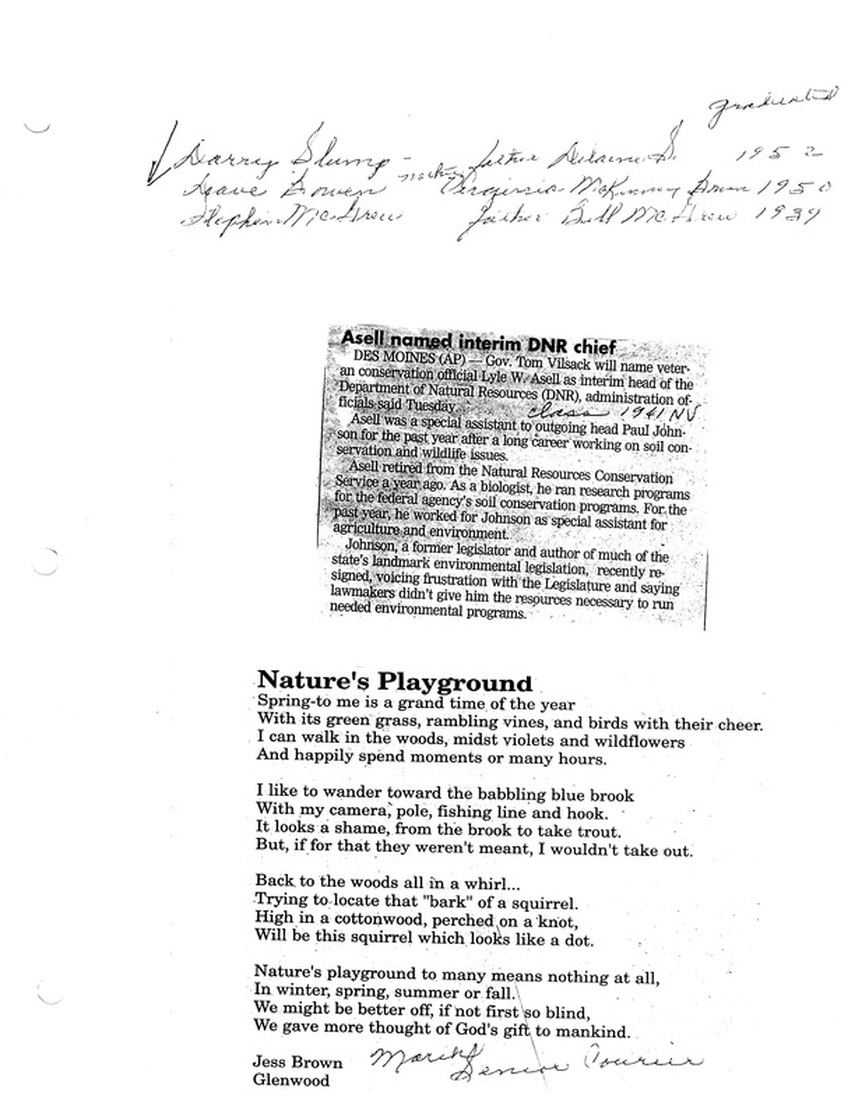