The 86th Annual Henderson High School Alumni Banquet was a great success! It was held on May 26, 2001 at the Little League Gym – serving began at 7:00 p.m. with a total of 103 persons registering!
President Barbara Frink greeted everyone and asked all to be seated with classmates, as desired. After she gave the table Grace, all enjoyed a delicious ham buffet dinner prepared and served by the Little League ladies. All agreed it was a wonderful meal.
After all had eaten Barb began with the Class of 1931. Max Stonebraker was the only one present, with Elizabeth Sutton Edmondson representing 1932. Present for the 1941 60-year Honor Class was Morris Harbor. The 1946 55-year Honor Class was well represented with Marian Harbor Butler, Phyllis Aukland Anderson, Maria Turner Core, Jim Holt, Arliss Farrington, Leo Boileau, and Eleanor Cunningham Shubert on hand. They did well with 7 out of 10 present. The 1951 50-year Honor Class did just a little better, with 10 of 11 attending. We graduated 12 members and were sorry to lose Maxine Turner Keltner in 1994. Enjoying the get-together were Abbie Stenger Duysen, Jerry Duysen, and Gerry (Junior) Curran, all of Omaha; Raymond (Bill) Morris of California; Wayne Turner of Carson, Deloma Magers Allensworth of Emerson, Bonnie Brown Frink, Don Sowers, Dwight Dittus, and Wanda Bowen Williams, all of Henderson. Unable to be present was Mildred Stevens Bromer of Omaha. Gerry introduced the Class.
Ruby Godfrey shared items from the old Henderson newspaper as well as current news.
Minutes of the previous Banquet were read and approved; likewise with the Treasurer’s Report.
Jim Holt gave the Nominating Report:

Officers elected by acclamation.
The meeting closed with Jerry Duysen leading the “Henderson Fight Song.” Barb expressed special “Thanks” to the ladies who prepared and served the meal, those who furnished the cakes, and to those who did the decorating and prepared the entertainment. We all much enjoyed the HHS version of “Who Wants to be a Millionaire” with Regis—alias, Jim Stenger—as host. His brilliant contestants were Everett McGrew, Polly Perry, Scoop Houser, and Jim Holt. Would you believe: All won a million! Who said Henderson High did not produce smart folks! Assistants were Abbie Duysen and Bernadine Pendegraft.
After a fun evening of visiting, looking at pictures (thanks to Elizabeth for bringing them), we left with a good feeling of joy. 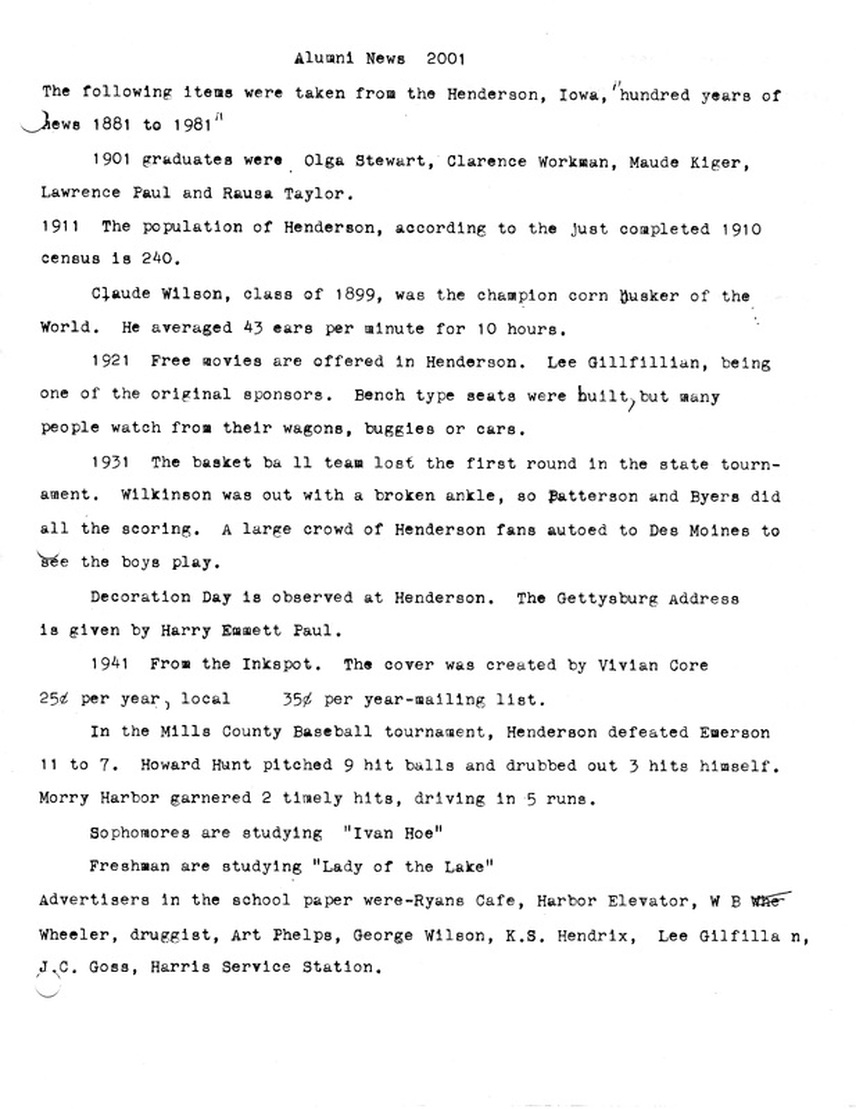 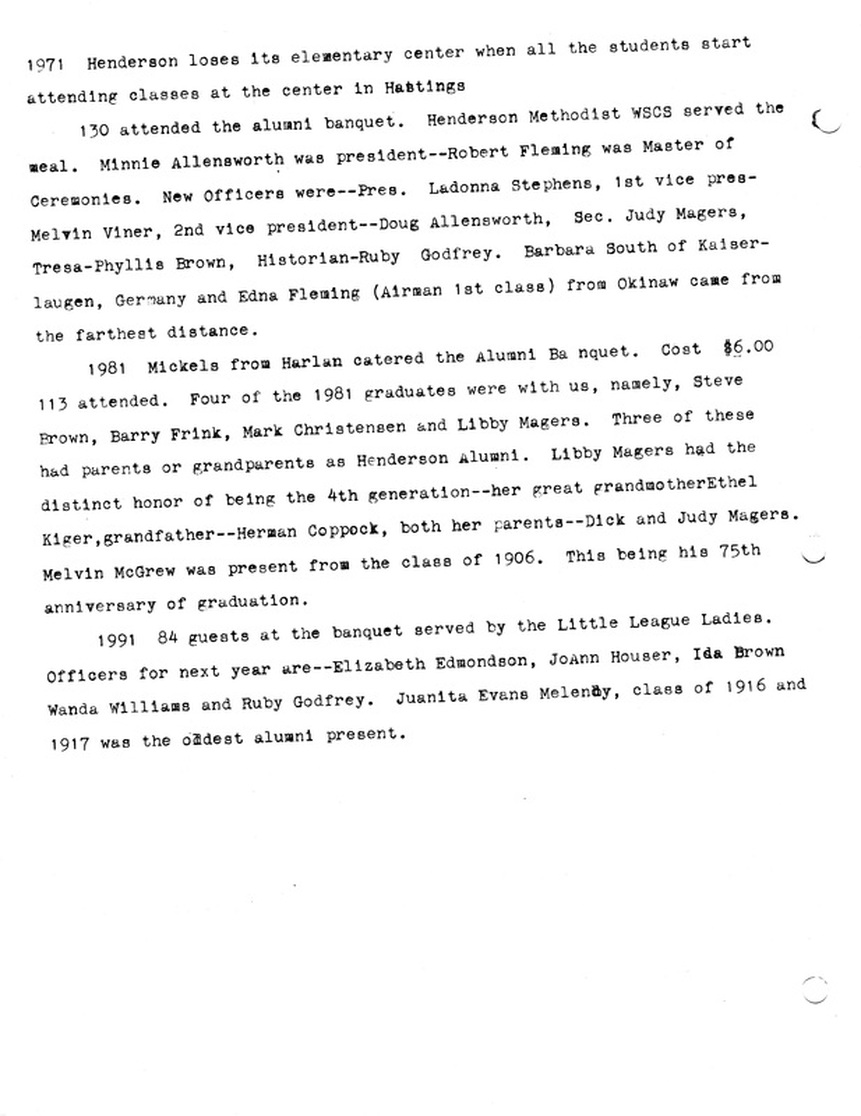 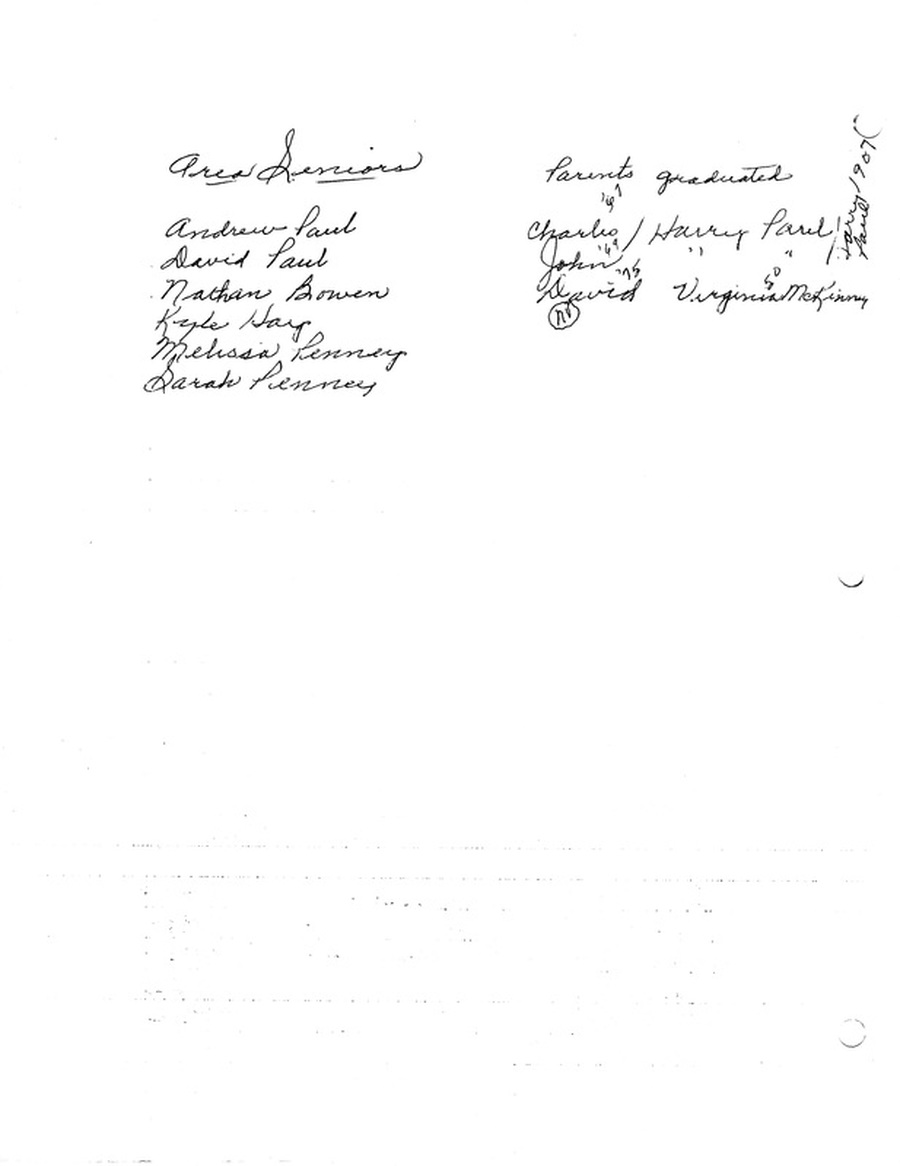 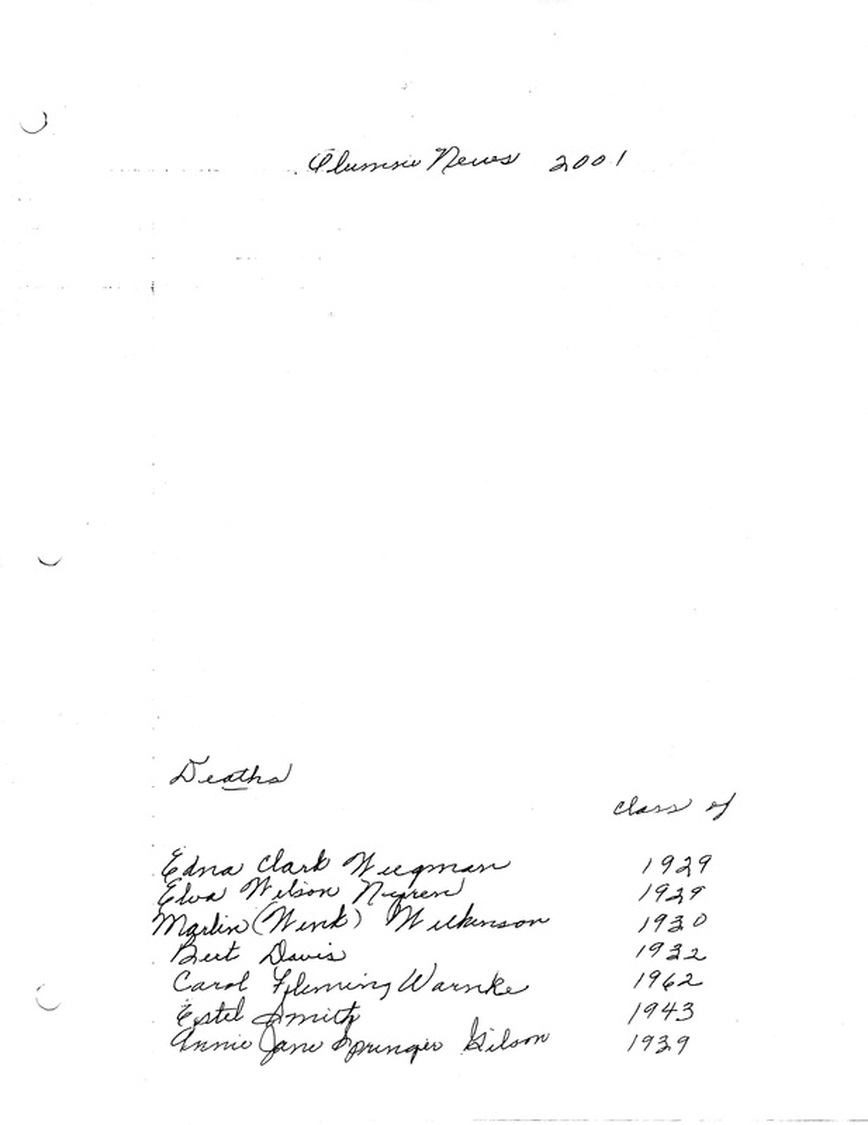 The 87th Annual Henderson High School Alumni Banquet was held on Saturday, May 25, 2002 at the Little League Gym. President Jerry Duysen greeted the 105 Alumni and guests and invited all to be seated with classmates, then all enjoyed a delicious ham buffet supper prepared and served by the local Little League ladies and gents. Our sincere “Thanks” to them for all their hard work. Table Grace was extended by Jim Stenger.
After the meal Jerry began the Roll Call of Classes with 1931. Max Stonebraker represented this class - so glad he and Geneva could be here. Elizabeth Sutton Edmondson was from 1932. Present from the 1942 60-year Honor Class were George Triplett, Nellie McGee Allen and Robert Wight. Representing the 50-year Class, 1952, were Shirley Butterfield Duysen and Bernadine McKinney Pendegraft. Shirley shared some interesting facts of that year and their class. Present from the 1957 45-year Honor Class were Judy Coppock Magers, Larry Hilliard, Nancy Wallace Van Pelt, Ramona Hilliard Sellers and Nancy Phillips Flaherty.
After the rest of the Class Roll Call, Jerry thanked the folks who prepared and served the meal and also others who set up tables and the 1949 Class who decorated the tables so beautifully in patriotic motif, and prepared and served the punch as folks gathered.
Ruby Godfrey, Historian since 1954, gave her interesting Report.
The minutes of the 2001 Banquet were read and approved; likewise, Treasurer’s Report. Wanda also recognized that Elizabeth Edmondson’s six sons were all present as well as two grandsons. We know that was special for her family.
Abbie Duysen recommended that the same officers carry on to next year:

Accepted by those present.
Jim Stenger was M.C. A fun time of entertainment was hosted by Don Duysen with a number from the audience singing with “Karaoke.” All enjoyed hearing lots of “oldies.” Thanks to Don and Lana for coming for the evening.
It was a good time. Thanks to all who worked to make it another memorable evening. 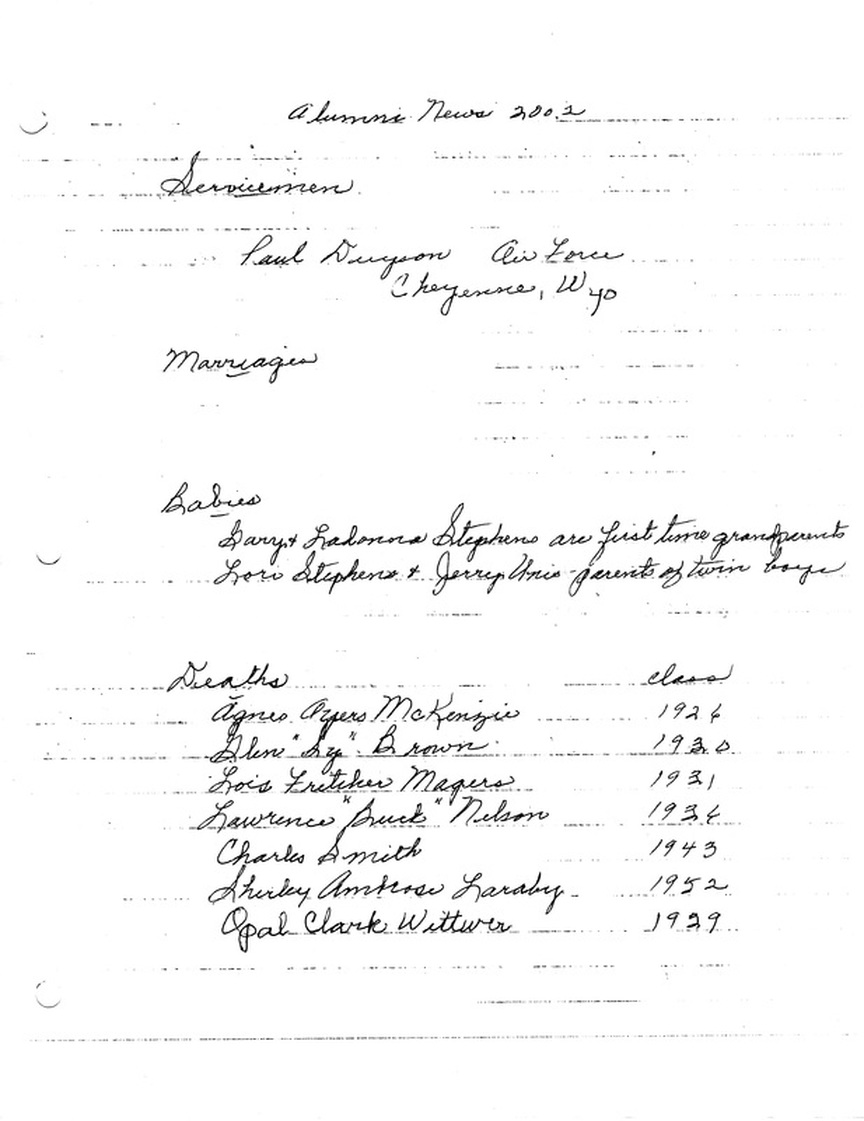 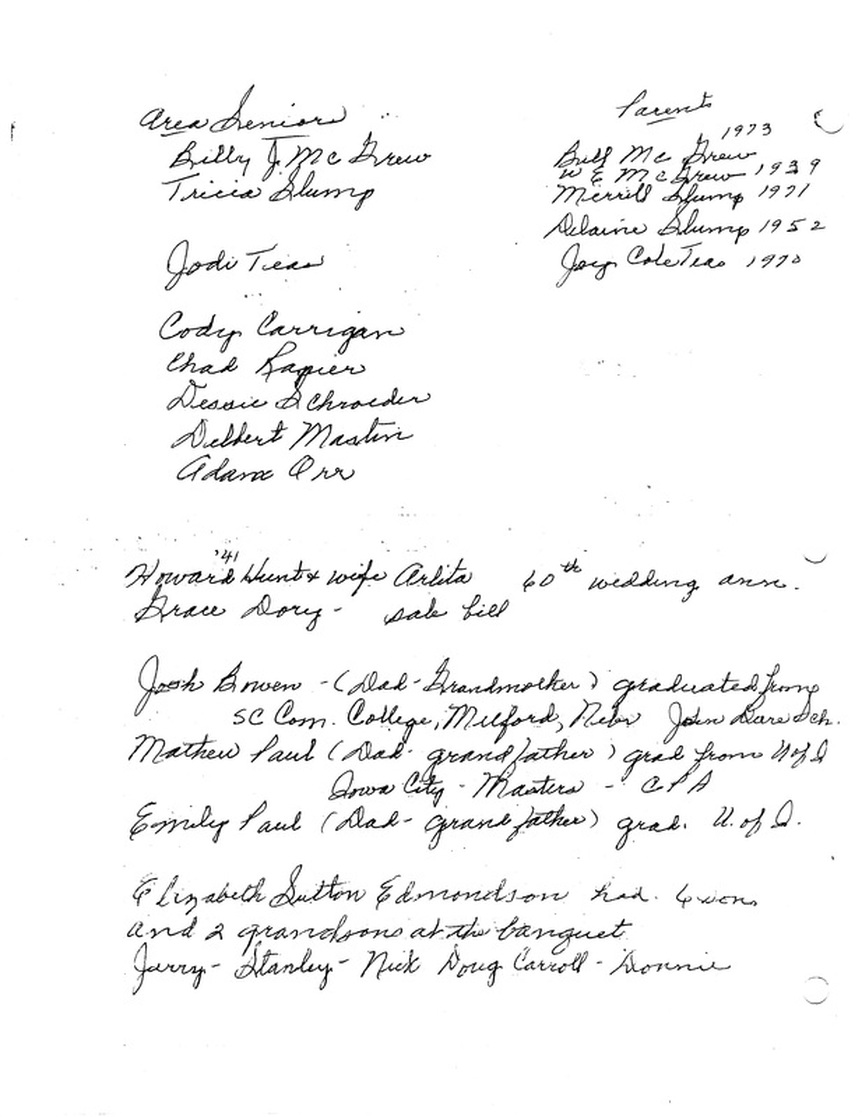 The 88th Annual Henderson High School Alumni Banquet was held on May 24, 2003 at the Little League Gym. Master of Ceremonies Stan Duysen invited all to be seated. The invocation was given by Jim Stenger. The delicious ham ball buffet dinner was served by the local Little League ladies and gents. As usual, it was super! We thank them for all their time and effort.
After the meal Stan introduced the group Westward Bound who entertained with a variety of music from through the years. We enjoyed them very much. Thanks to Crystal, Rod, Randy, Dee and Patrick for the delightful program.
After the music Stan shared some excerpts from early years of the local Alumni. Wanda Williams read the 2002 minutes along with the Treasurer’s Report. She also introduced some family members of Westward Bound who were present.
Ruby Godfrey gave her interesting Historian Report and also introduced all her family that were present. We know she was so glad they could be in attendance.
Stan then invited all the kitchen folk to come out for a special “Thank you” for their work.
Roll Call of Classes began with 1931. Max Stonebraker was present. And Elizabeth Sutton Edmondson represented the 1932 Class. The 1943 60-year Honor Class was introduced by Ruby Godfrey. They were Ruby Smith Godfrey and Everett McGrew of Emerson, Betty Jane Allensworth Raney of Bella Vista, Arkansas; Tom Aukland of Omaha, Louis Farrington and Stanley Harold of Red Oak. Ruby brought lovely red geraniums for class members. Those present in the 1953 50-year Honor Class were Rose Mabbitt of Minneapolis, Twila Brammier Wilkinson of Indianola, Marjorie Morris Cleveringa of Sioux Center, Sharon Allensworth Golhoffer of Charter Oak, Stan Duysen of Rio Vista, California; and Scoop Houser of Red Oak. Stan gave red roses to each of the ladies of his class. In the 45-year Honor Class were Lois Meadows Murray of Bentonville, Arkansas and Ladonna Ross Stephens and Bud Brown of Henderson. We were also pleased to have several Nishna Valley Alumni present. Welcome!
The evening closed with Jerry Duysen leading all in singing the Henderson High School Fight Song and Auld Lang Syne (as was sung in 1916). All agreed it was a good evening. 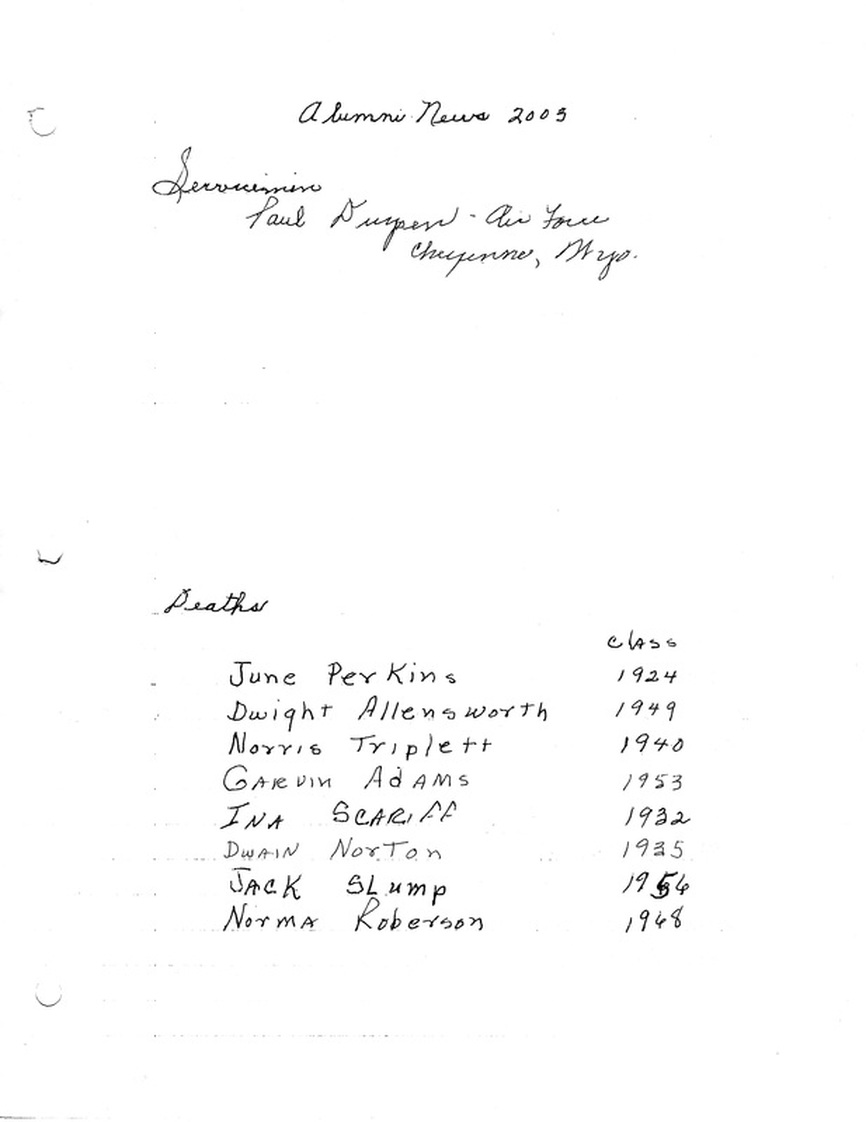 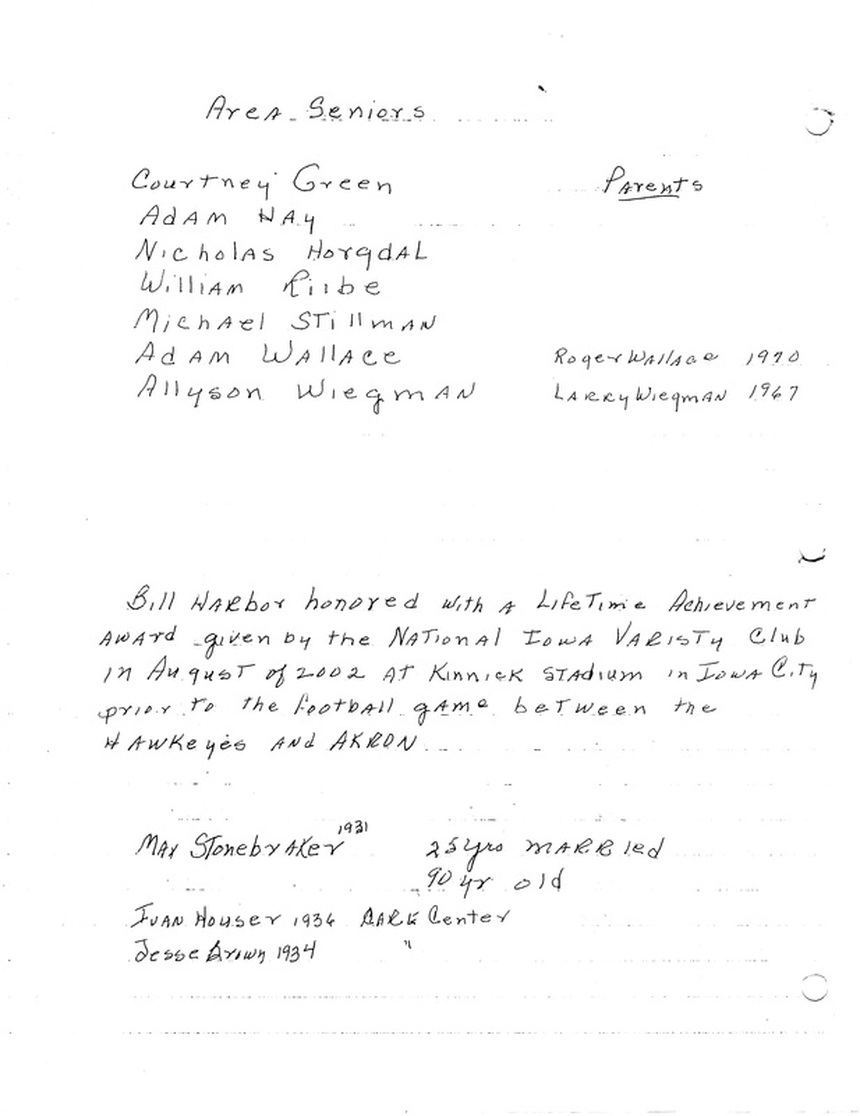 The 89th Annual Henderson High School Alumni Banquet was held in the new Community Building on Saturday, May 29, 2004 at 7:00 p.m. President Judy Magers invited all to be seated, followed by the invocation by Wanda Williams. A delicious pork loin buffet dinner was served by several of the ladies of the Community – even four from Emerson. We appreciate all their work and effort. There were 74 persons attending; several who made reservations did not attend.
After the meal Judy began the Roll Call of Classes with 1931. We were pleased to have Max Stonebraker and his wife, Geneva, present to represent their Class. Elizabeth Sutton Edmondson was in attendance from the Class of 1932. Four were present from 1938: The Springer twins, Bernice Copeland and Beatrice Buffington; Harry Paul, and Bill Harbor. There were none present from the 60-year Class; howev3er, the Class of 1954 50-year Honor Class was well represented. Some of their members decorated their tables so cleverly, made memory books for each person, also made picture medallions, and each even wore a red hat. Those present were Kay Steiner Roberts of Yakima, Washington; Roberta Roeder Duysen of Fargo, North Dakota; Barbara Ross Stille of Malvern, Lois Siefford Bradford of Johnson City, Texas; Barbara Brown Von Dielengen of Red Oak, Genevieve McVay Albright of Omaha, and Carrol Edmondson Moulds of Webster City. Gene Winchester of Council Bluffs was the only member absent. Three deceased members are Dick “Toppers” Magers, Patricia Springer Clark, and Bev Byers. As each was introduced they shared interesting facts of 1954.
After Roll Call of Classes was completed, the minutes were read and approved as was the Treasurer’s Report.
Ruby Godfrey gave the Historian’s Report. Believe it or not, but she is completing 50 years as our capable Historian and decided to retire. A gold clock was presented to her from all her fellow Alumni in appreciation for her many years of faithful service.
It was stated that Macedonia has class pictures, etc., in a large folder. Alice Allensworth will look into where one can be secured. Motion made by Wanda Williams, seconded by Ruby Godfrey, to get one if possible. All voted in favor.
There was discussion if we wish to continue with the Banquet. With a show of hands, all agreed unanimously in favor. Discussion followed if to continue with it in the Community Building or at the gym. Robert Fleming recommended we remain here because of no steps, A/C, etc. It was voted in favor of staying in the Community Building.
Serving on the Nominating Committee were Bryan Sowers, Carrol Moulds, Everett McGrew, and Virginia Bowen. They nominated:

Elected by acclamation.
It was suggested that pictures could be checked out if wanted for reprint, etc. Jerry Duysen led in singing the Henderson School Song.
With no further business, the meeting adjourned for all to visit. It was also to check on the present thunderstorm outside. 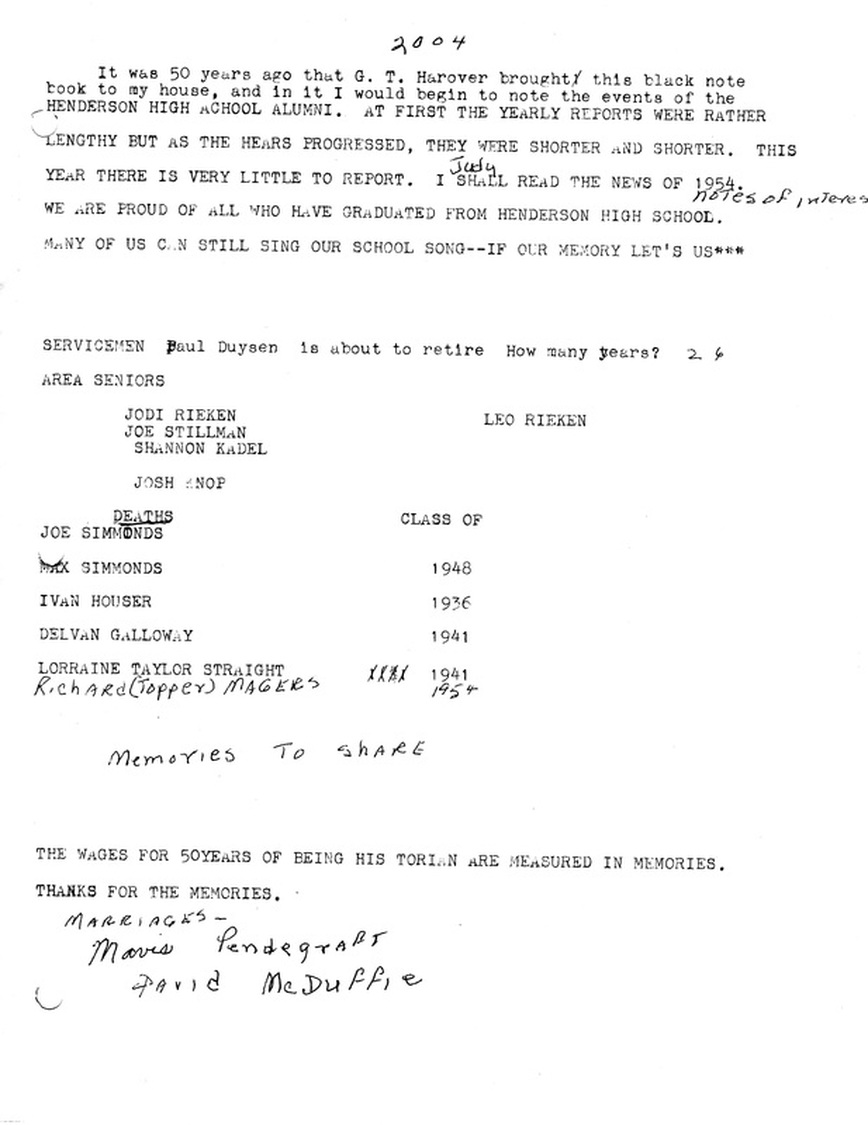 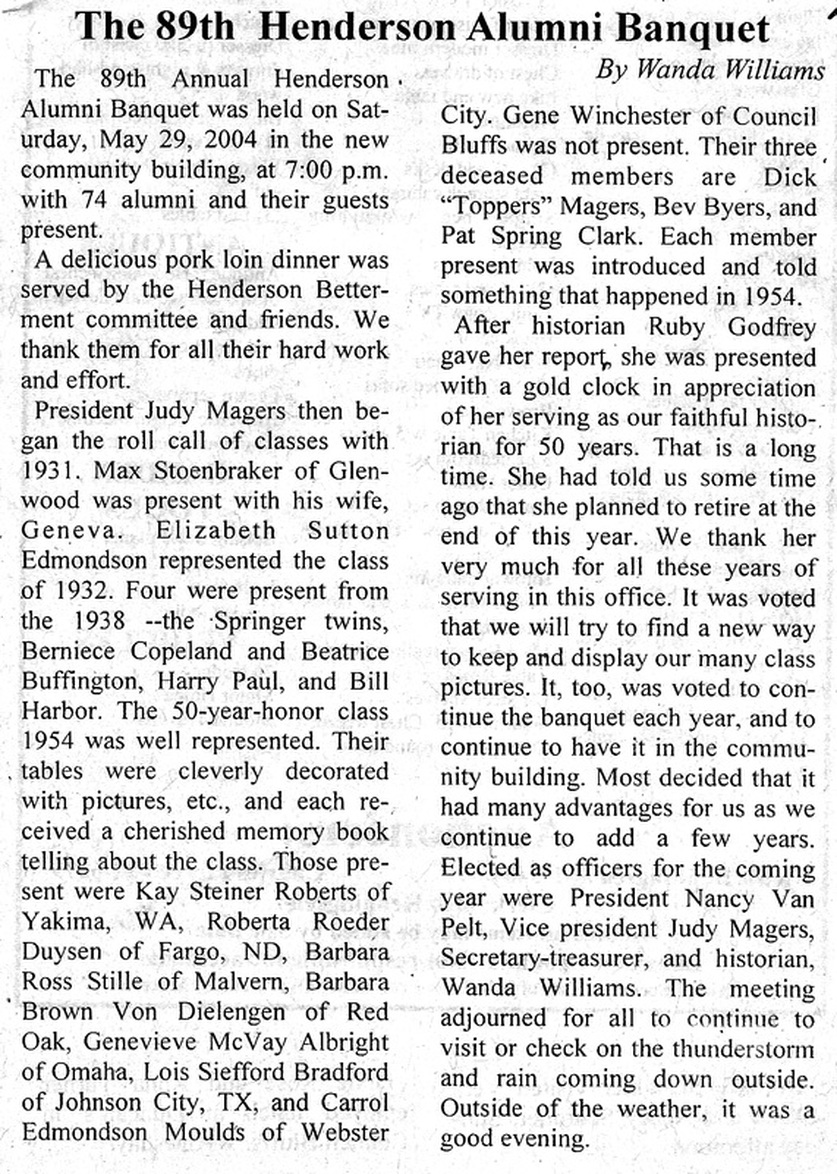 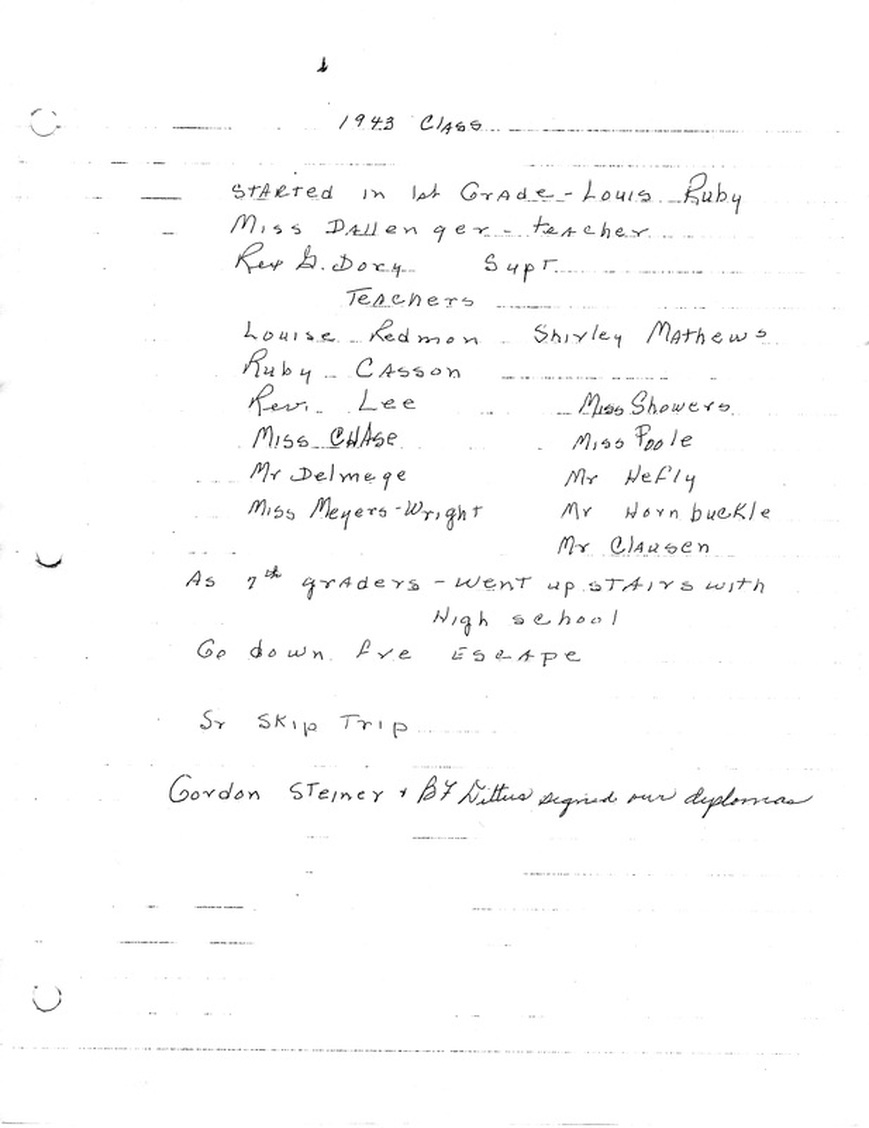 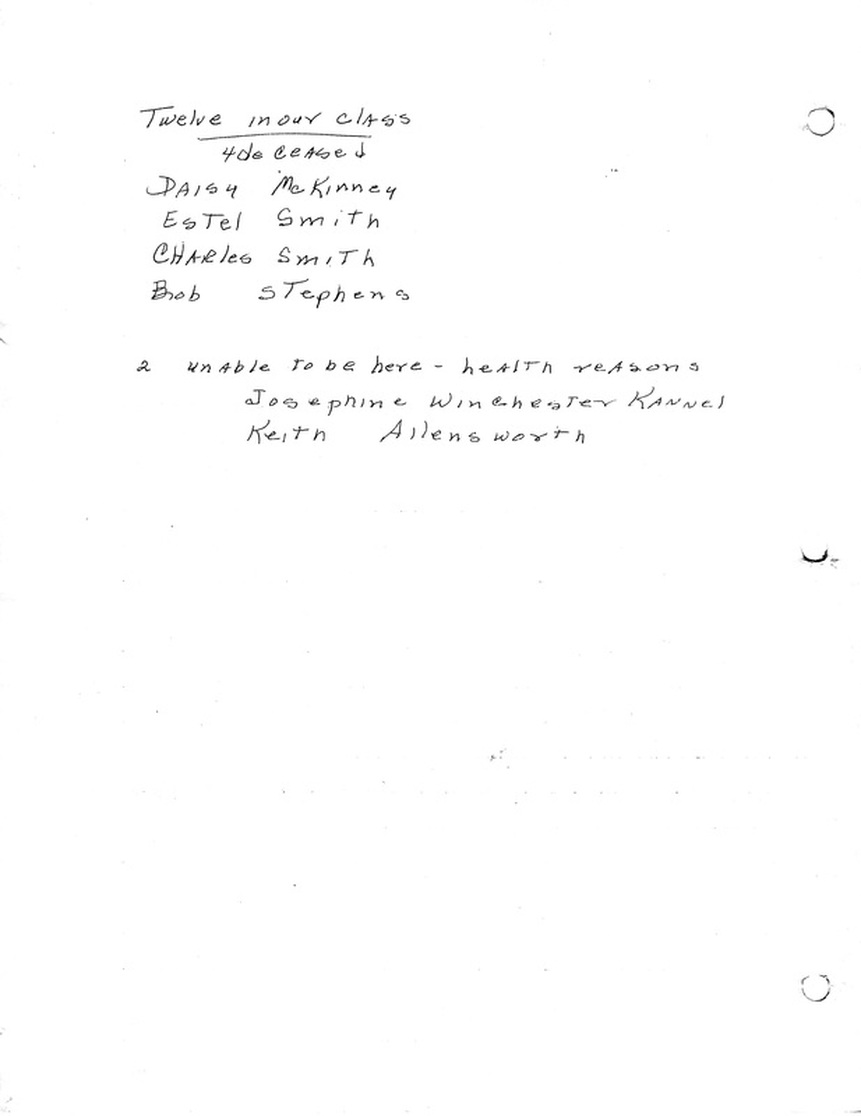 The 90th Annual Henderson High School Alumni Banquet was held at the local Community Building on Saturday, May 28, 2005 at 7:00 p.m. President Nancy Van Pelt extended a welcome to the 83 persons present, with the invocation given by Wanda Williams. Everyone then went to the buffet line for the very delicious roast beef/chicken breast meal served by Shirley Straight of Emerson. It was so good. She received a hearty “Thank You” from everyone as the meeting began.
Nancy began the Roll Call of Classes with 1931. Max Stonebraker and his wife, Geneva, represented that Class. Elizabeth Sutton Edmondson, Class of 1932. Representing the 60-year Honor Class, 1945, were Don Parker of Muscatine, Lester Ryan of Glendora, California; Lee Sowers of Chandler, Arizona; Leora Harbor Marcotte of Highland Ranch, Colorado; and Ardi Allensworth Winnett of Red Oak. Present from the 1955 Class, 50-year Honor Class, were Murray Duysen of Fargo, North Dakota, Bob Stille of Malvern, Thelma McGee Kent of Clarinda, Bob Roeder of Henderson, Janice Duysen of Des Moines, and Betty Hendrix Jefferis of Shenandoah.
After the completion of the Roll Call of Classes, Nancy opened the business meeting. The minutes of the last Banquet were read and approved; likewise, the Treasurer’s Report. We began this year with a balance of $420.27.
We again discussed the folder for the pictures, as no action was taken last year. Alice Allensworth thought the Carson school had made the one for Macedonia. She agreed to research this more.
Bryan Sowers, Nominating/Welcome Committee Chairman, made the motion that the present officers retain their position for another year. So elected by acclamation were:

Wanda gave the Historian Report and also shared messages from members absent.
Harry talked about “steps” relating to school.
Murray Duysen, President of the Class of 1955, shared some small town values. He introduced class members and spouses present, and each told of their life since graduation. Letters were read from those unable to be present. Murray told about some of their teachers, activities, etc. He asked brother, Jerry, to come and lead in singing of Henderson School Song.
Nancy adjourned the meeting for all to visit.