The 76th Annual Henderson High School Alumni Banquet was held on Saturday, May 25, 1991 at the Little League Gym at 7:00 p.m. A delicious ham buffet dinner was served by the Little League Women (assisted by some men and youngsters) to the 84 Alumni and guests present.
After the meal President Vicky Putnam extended a welcome to everyone, then all expressed their “Thanks” to those who prepared and served the meal.
Secretary and Treasurer Wanda Williams read those Reports, as well as the minutes of the May 19, 1916 Banquet – the first one to be held. It was an honor to have Juanita Evans Melendy present with us. She was a graduate of that 1916 Class! She also read a letter from Ruth Hornbuckle, wife of Glen Hornbuckle, a former Superintendent. She now lives in Shenandoah.
Our bank balance at the beginning of this year was $420.60.
Ruby Godfrey gave an interesting Historian Report, including names of those who were a part of Desert Storm.
Officers for the coming year elected by acclamation were:

M.C. Charles Paul called the Roll of Classes. Juanita Melendy, members of both Classes of 1916 and 1917, was our senior member present. Sy Brown and Wink Wilkinson were present from the Class of 1930. Honor Class of 1931 had three members present: Thelma Higgins, Nellie Wilkinson, and Lois Magers. Those representing the 1941 Class were Estalene Harris Henderson of Des Moines, Audrey Shook McKee of Red Oak, Delvin Galloway of Lakewood, Florida; Howard Hunt of Council Bluffs, and Morris Harbor. Each of them present told a little about themselves.
Those present from the 1946 Class were James Holt of Knoxville, Eleanor Cunningham Shubert of Derby, Kansas; Janice LeRette Palmer of Bloomington, Illinois, and Leo Boileau of Henderson, and Phyllis Aukland Anderson of Red Oak.
Half of the Class of 1951 was present: Jerry and Abbie Stenger Duysen of Omaha, Deloma Magers Allensworth of Emerson, Don Sowers, Dwight Dittus, and Wanda Bowen Williams, all of Henderson.
Present from the 1961 (30-year) Class were Ilona Taylor Barkam of Omaha, Lyle Asell of Chariton, and Paul Nyren of North Dakota.
The rest of the evening was spent visiting and looking at class pictures that were brought and being cared for by Elizabeth Edmondson. 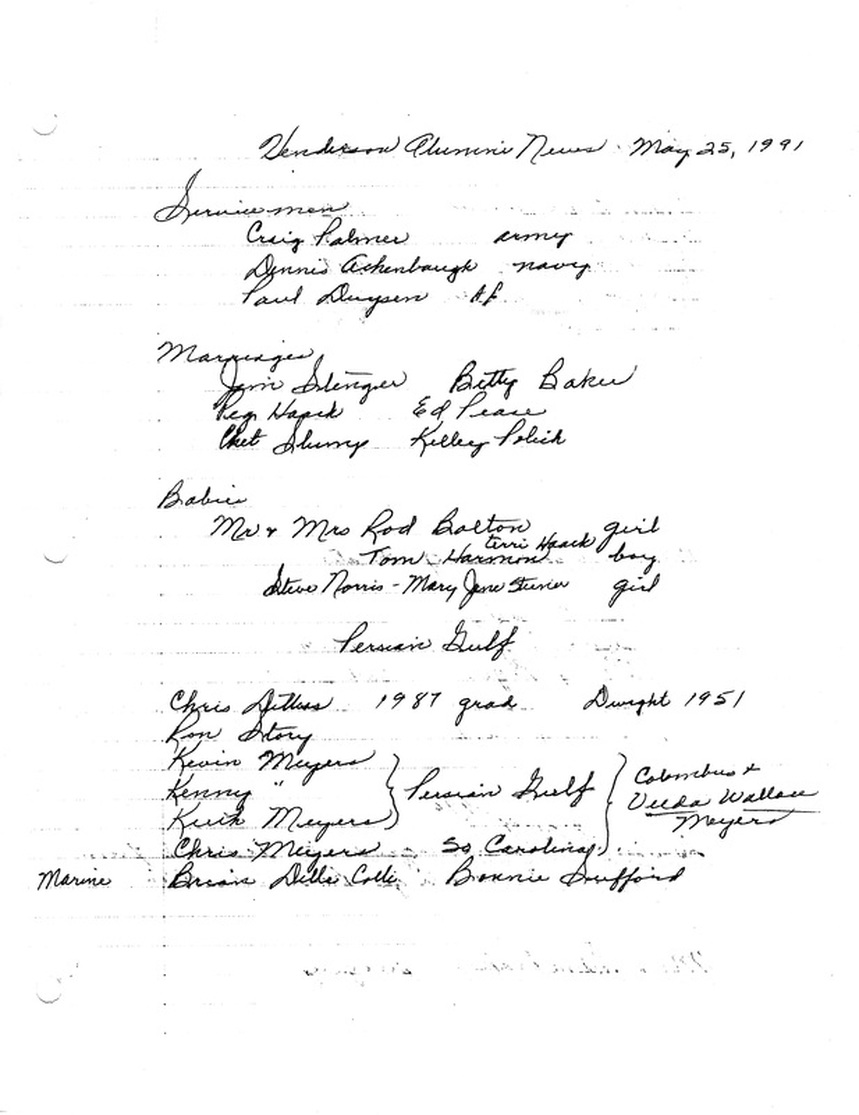 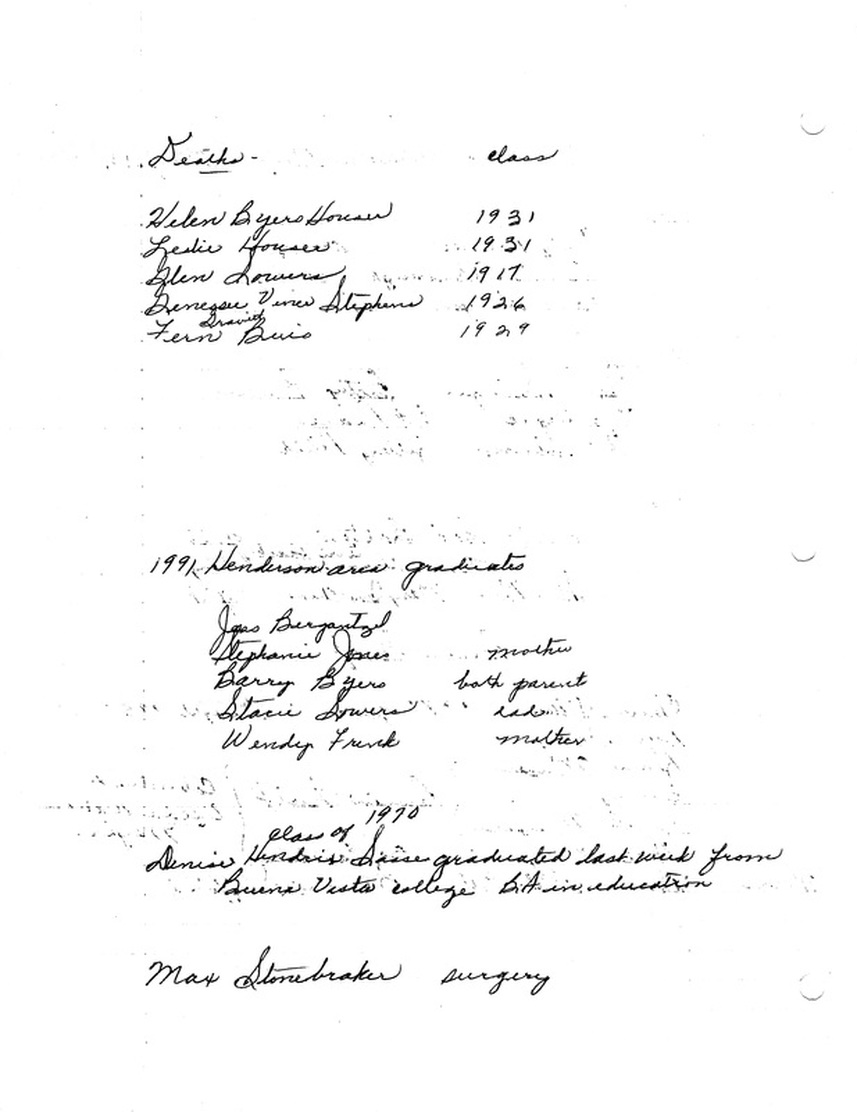 The 77th Annual Henderson High School Alumni Banquet was held at the Little League Gym on Saturday, May 23, 1992 at 7:00 p.m. The ham buffet dinner served by the local ladies and gents was delicious – all 80 persons agreed to this. The invocation was extended by Jo Ann Houser.
After the meal President Elizabeth Edmondson extended a welcome to everyone. Secretary/Treasurer Wanda Williams gave those Reports. We began this year with a bank balance of $443.61.
This was followed by Ruby Godfrey’s interesting Historian Review.
The following officers were elected:

With no other business, the Roll Call of Classes began with 1928 represented by Pauline Simmonds Whitmore. Sy Brown was from Class of 1930; Max Stonebraker, 1931. Elizabeth Edmondson and Ida Brown spoke briefly for the 1932 Class, the honored 60-year Class.
All six living members of the Class of 1942 were present to represent the 50-year honored class. They are: George Triplett of Mahomet, Illinois; Robert Wight of Eureka Springs, Arkansas; Everett Connor and Margaret Freeman Pedersen, both of Omaha; Nellie McGee Allen of Mesa, Arizona; and Herbert Freeman of Gravity. George told some anecdotes about some school experiences. Deceased members of their Class are Marilyn Connor Pothoff, Lyle Sowers, Jack Fickel and Lloyd Stephens.
Those present from the 1952 Class, the 40-year honorees, were DeLaine Slump of Henderson, Marvin Adams of Emerson, Shirley Butterfield Duysen of Omaha, Jo Ann Taylor Houser of Red Oak, and Bernadine McKinney Pendegraft of Creston. She shared some excerpts from their yearbook (they were the first class to have one).
Following the adjournment, everyone much enjoyed the fine musical presentation given by “The Music Company,” an ensemble from the Stanton/Red Oak area. The variety of selections was very well done. A special thanks to Elizabeth Edmondson and Bill Harbor for making this Program possible! It was great!
The balance of the evening was spent visiting and looking at the old pictures cared for and brought by Elizabeth. 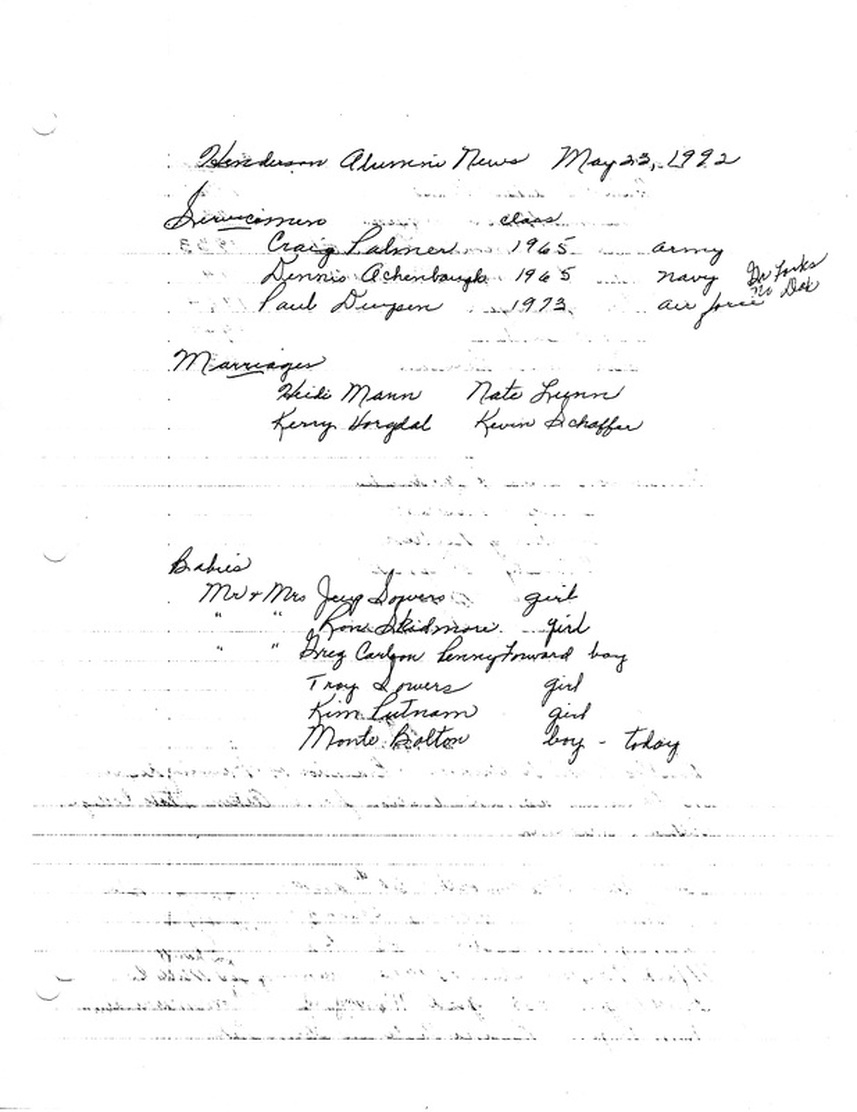 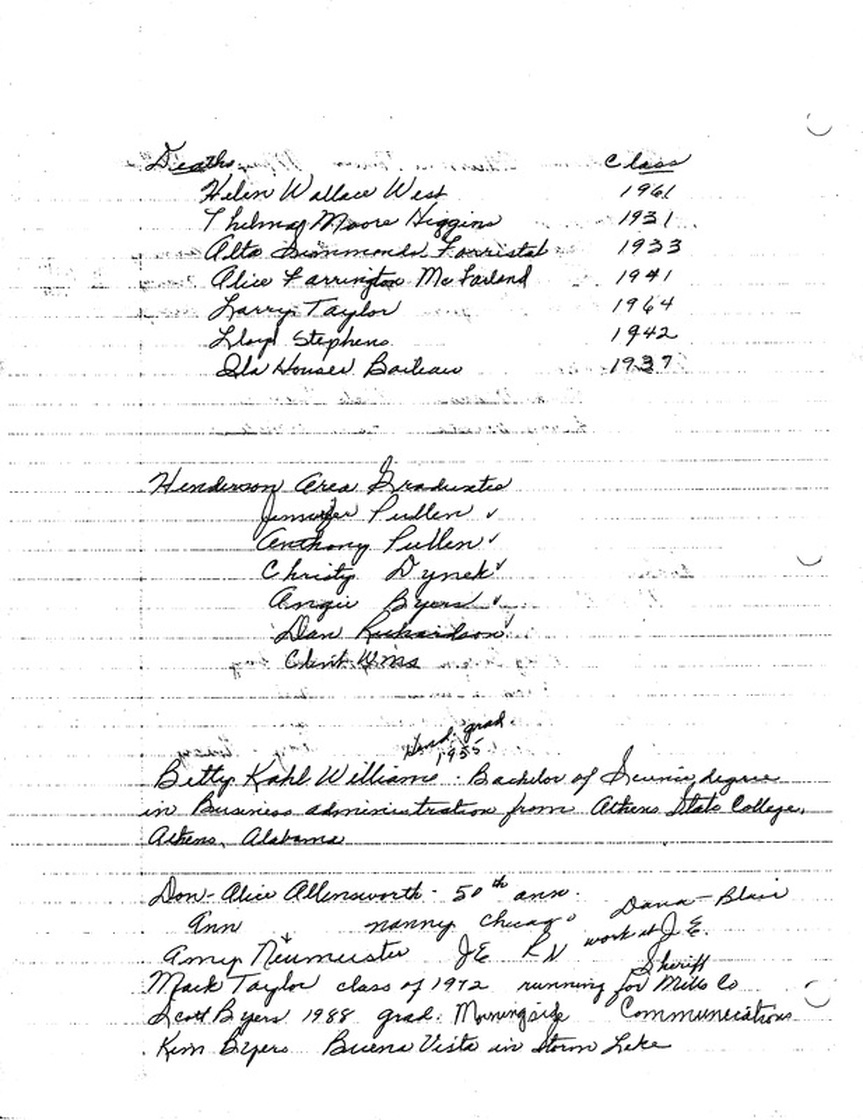 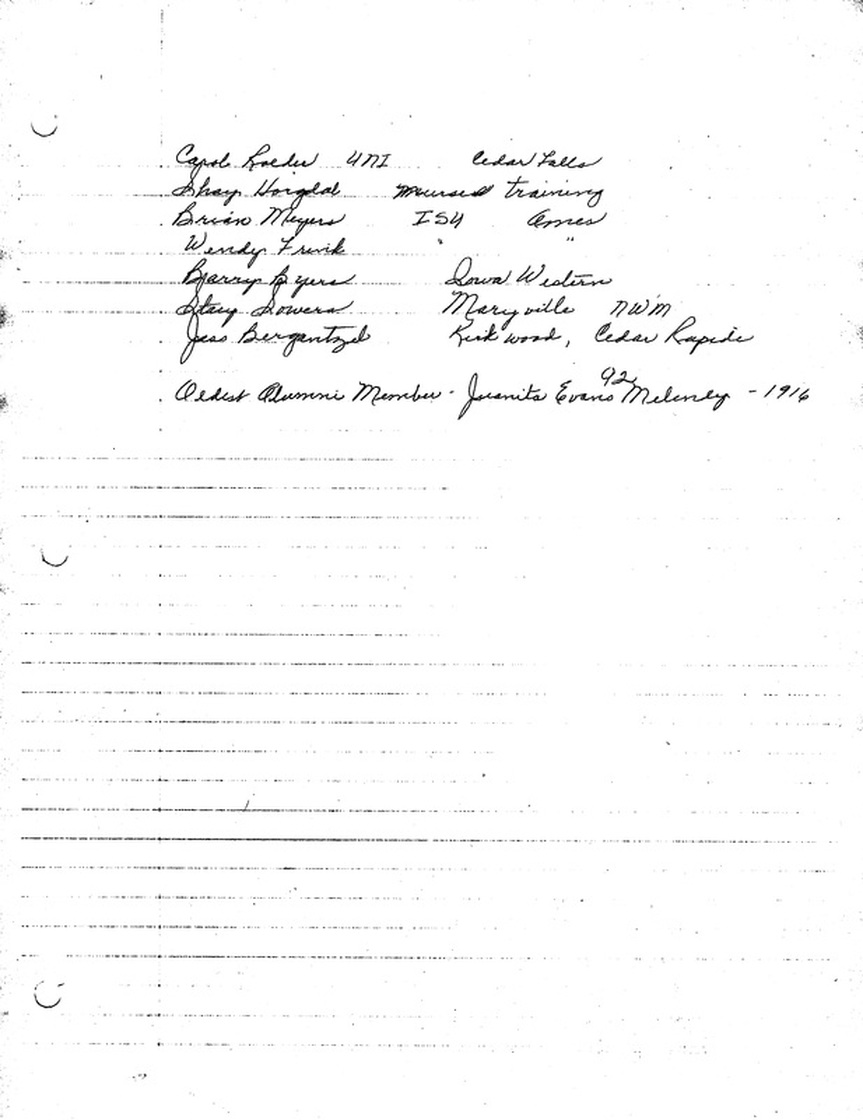 The 78th Annual Henderson Alumni Banquet was held at 7:00 p.m., May 29, 1993 at the Little League Gym. All 98 persons present enjoyed a delicious ham buffet dinner prepared and served by the local Little League ladies and fellas. Harry Paul served as M.C. for the evening.
The Secretary and Treasurer’s Reports given by Wanda William were approved. Historian Ruby Godfrey gave an informative updated historian review of this past year. Our oldest living Alumni, Juanita Melendy, was unable to be present because of recent ill health.
Bill Harbor presented the slate of officers who were elected by acclamation. They are:

No further business was discussed.
President Ida Brown began the Roll of Classes with 1925. We were pleased to have Minnie Gravett Allensworth present this year to represent this Class.
The 50-year Honor Class, 1943, had the privilege of having 10 of the 11 members of their class present. They were: Charles Smith of Mission, Texas; Tom Aukland of Omaha; Josephine Winchester Kannel of Plum City, Wisconsin; Betty Allensworth Raney of Bella Vista, Arkansas; Louis Farrington and Stan Harold of Red Oak; Bob Stephens of Pacific Junction; Everett McGrew of Emerson; Estel Smith of Kansas City; and Ruby Smith Godfrey of Henderson. We enjoyed hearing a brief report from each. Keith Allensworth of Bellevue, Nebraska was unable to be present. Daisy McKinney Harold was deceased quite some years ago. Kenneth Hunt of Council Bluffs, who had been with their Class through their junior year, joined them for the evening. The Godfreys’ two sons, Darrell and Dick, and spouses, were present for their mother’s special banquet. Both fellas were NV graduates. We were pleased to have a good turn-out this year. At the close of the evening, Wanda told about the need for refinishing the gym floor – a “passing of the basket” for funds for same netted $445.00. We are most appreciative to all for their generous donations.
Earlier in the evening, Horace Richardson played a number of musical selections on the piano. Everyone enjoyed visiting and looking at the school pictures brought and cared for by Elizabeth Edmondson. 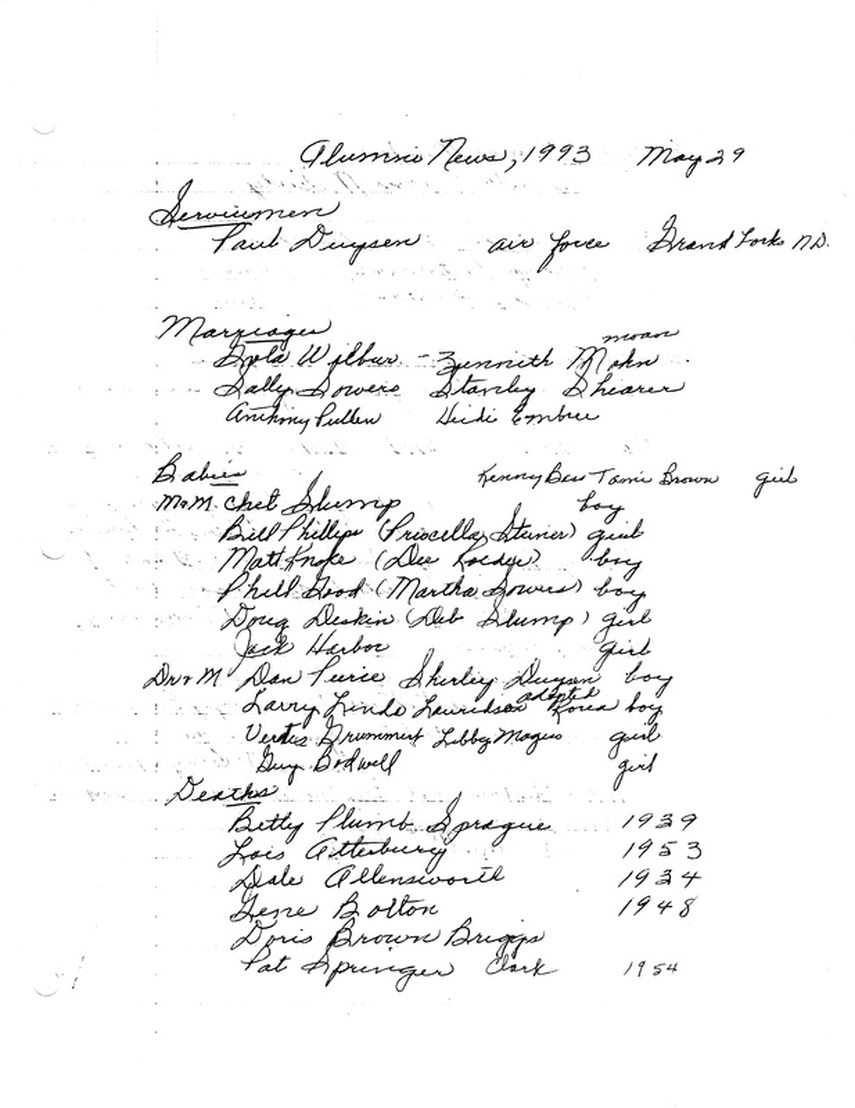 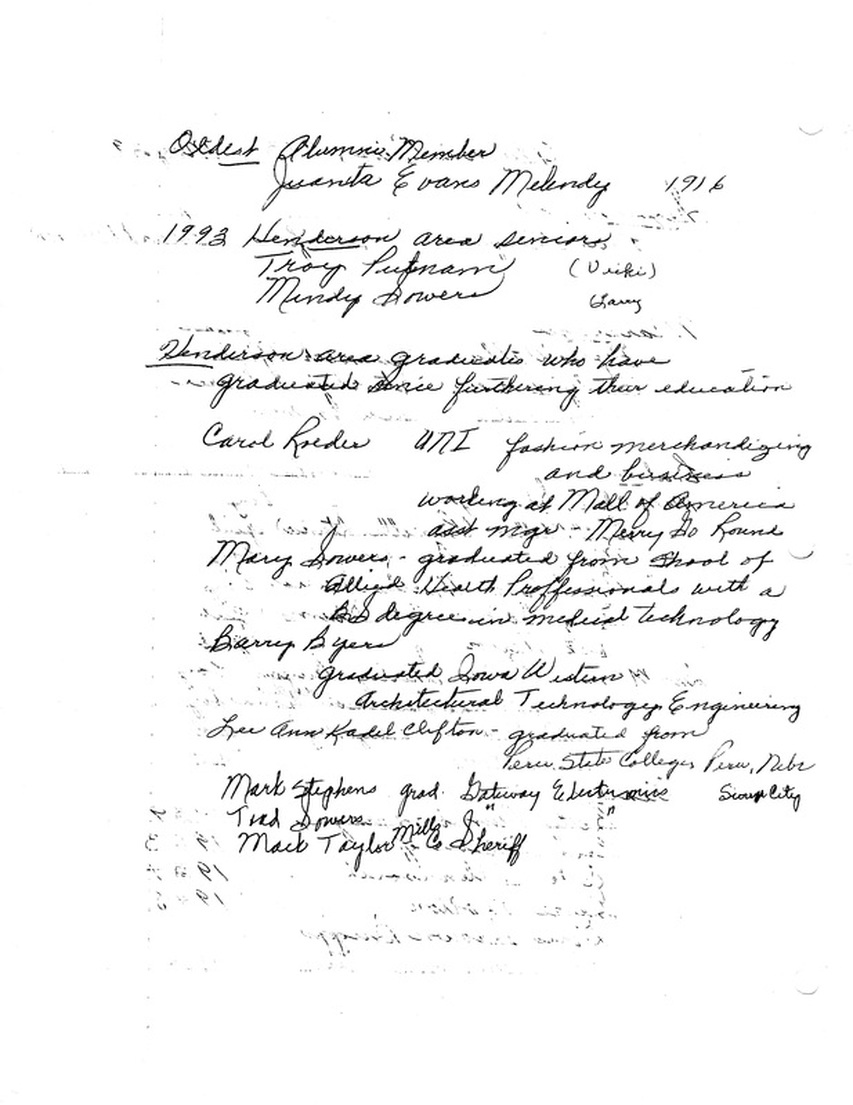 The 79th Annual Henderson High School Alumni Banquet was held on May 28, 1994 at the Little League Gym. There were 76 members and guests that enjoyed a delicious ham buffet dinner prepared and served by the local Little League women and one fellow. We appreciate their hard work.
After the meal we were entertained by the Nishna Valley Jazz Band under the direction of Sean Abel. They did a great job – on a variety of selections. We hope perhaps they can come back another time.
President Jo Ann Houser called the meeting to order. The minutes of the 1993 Banquet and the Treasurer’s Report were given by Wanda Williams. They were so approved.
Bob Roeder, Nominating Committee Chairman, read their Report:

This slate of officers was elected by acclamation.
Ruby Godfrey shared her Alumni Report from this past year.
Bill Harbor then began the Roll Call of Classes with 1930. Marilyn Triplett Viner was the only one present from the 50-year Class 1944. Harry Paul read a letter that had been received from Dwight Parker, also a member of that Class.
Representing the Class of 1954 were Roberta Roeder Duysen, Carol Edmondson Moulds, and Genevieve McVay Albright.
With no further business or discussion, the rest of the time was spent visiting and looking at the old pictures brought and cared for by Elizabeth Edmondson. 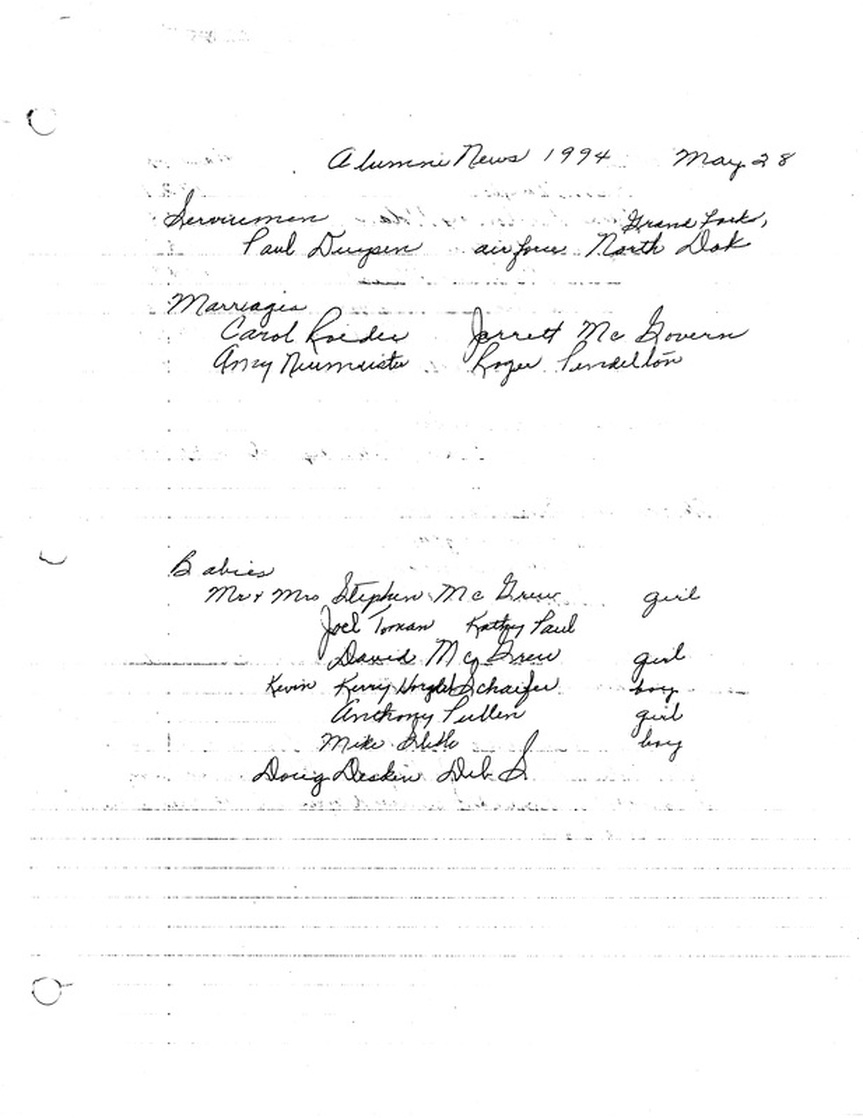 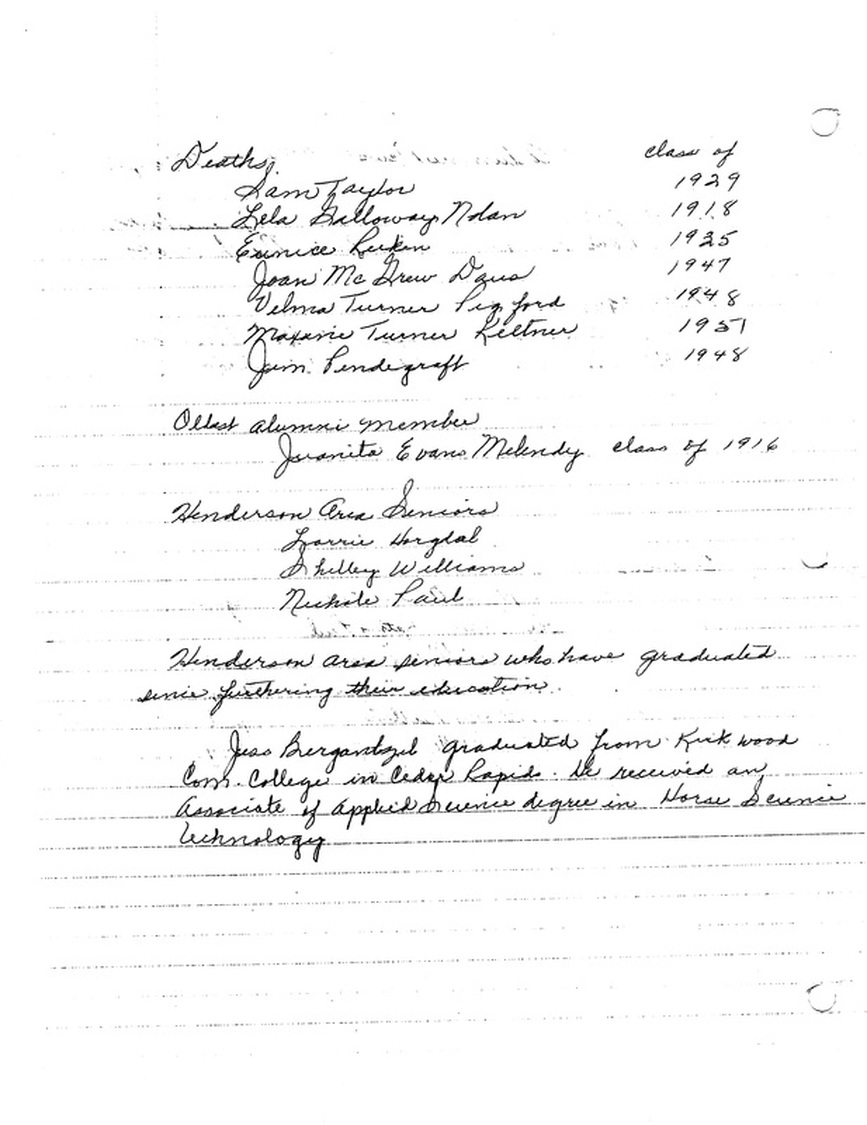 The 80th Annual Henderson Alumni Banquet was a rousing success! With 144 present for this special observance, we had to go back to 1969 to find a Banquet with similar attendance. A Roll Call of Classes was given prior to the meal so fellow classmates could be seated together. The invocation was given by Bill Harbor. The delicious ham buffet dinner was prepared and served by the local Little League ladies, and some gents, too. We most appreciate all their hard work.
Following the meal President Everett McGrew called the meeting to order. “Thank Yous” were extended to those who helped prior to the Banquet with setting up tables, chairs, decorating the gym so beautifully with school colors of red, black and white, and all the other jobs. He gave special recognition to Ken and Mary Lauridsen for their many volunteer acts they do in our community. It was well deserved.
The minutes of the 1994 meeting and Treasurer’s Report was given by Wanda Williams.
Ruby Godfrey, our capable Historian for 41 years, gave her yearly summary.
The Class of 1945 was recognized as our 50-year Honorees. Those present were Don Parker, Glen McGee, Lee Sowers, Lois Dunblazier Darrington, Alice McGee Ward, Leora Harbor Marcotte, and Lester Ryan. Ardith Allensworth Winnett was unable to be present. Jo Anne Stonebraker Adkins passed away several years ago. Don Parker shared a humorous reading with us.
New officers elected by acclamation were:

Marg Winchester favored us with a solo, “Precious Memories.” We then were treated to the premier showing of the video “Memories of Henderson, My Home Town.” Hats off to Ken Lauridsen who did a super job of putting this keepsake together with pictures sent in by Alumni to Jerry and Abbie Duysen. Special “Thanks” to Jerry and Abbie for all their efforts and providing the equipment to show the video, and to them and Ellen and Jack for the decorations and taking care of the intermission. Thanks, too, to Dixie and Steve Steiner for putting the brochure together that accompanies the video. Everyone enjoyed the production and many will purchase one to enjoy in the future.
This was a great Banquet, thanks to the efforts of many. 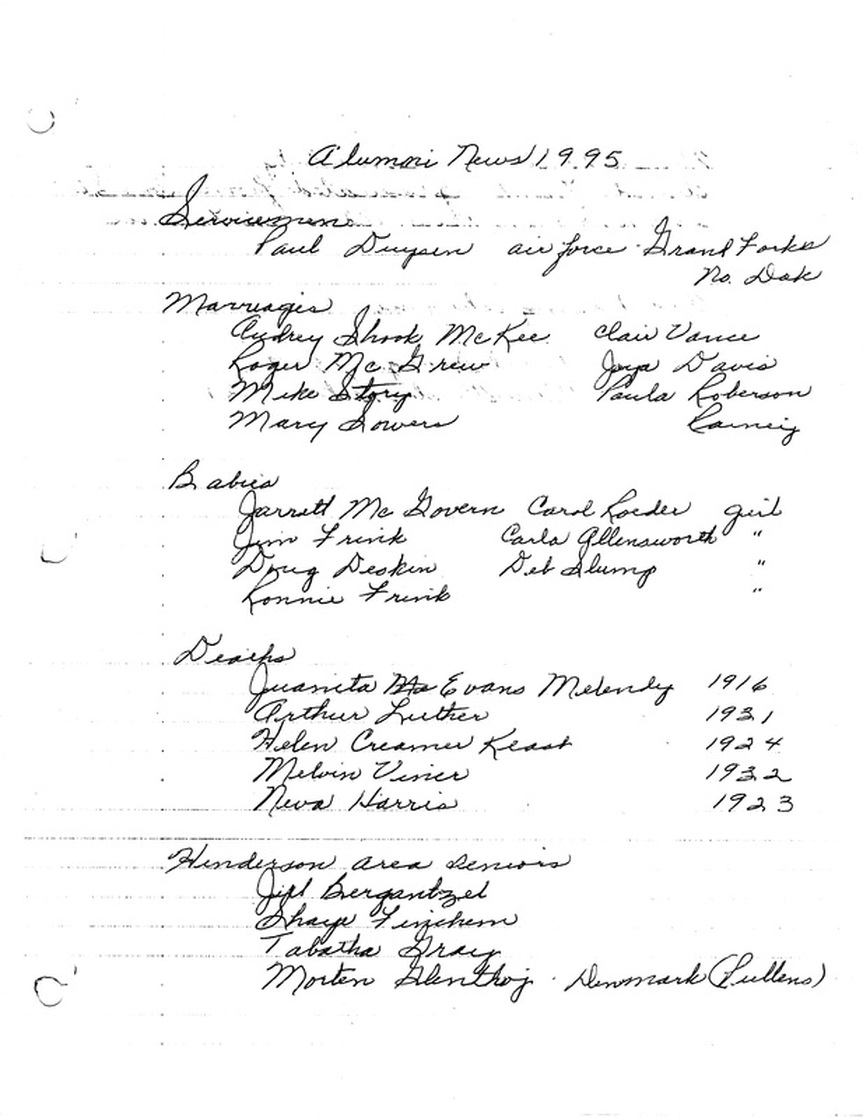 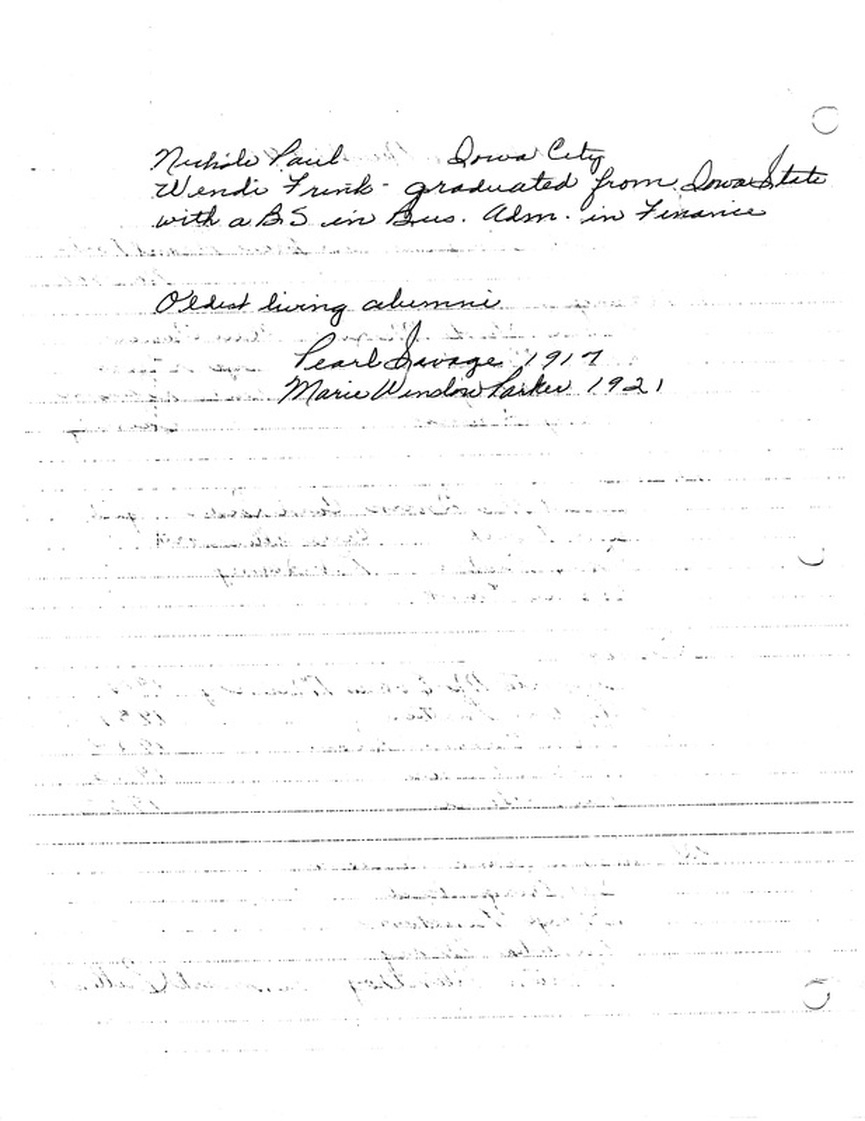