The 56th Annual Alumni Banquet of the Henderson High School Alumni Association was held Saturday, May 29, 1971 at 8:00 D.S.T. at the Henderson School Gymnasium. The Methodist W.S.C.S. served dinner which was attended by 123 with 9 guests. Rev. Delbert Terry gave the invocation. Robert Fleming acted as Master of Ceremonies.
The Henderson graduates of Nishna Valley High School were welcomed to the Alumni Association by Darlene Bolton. Response was given by Cathy Forward.
President Minnie Allensworth presided over the business meeting. The Secretary’s Report was read and approved. The Treasurer’s Report was read with a balance of $135.91.
The Nominating Committee submitted the following officers for 1972:

An award for having a pupil in the local school for 40 years was presented to Minnie Allensworth by Betty Raney and pinned on by Craig Allensworth.
It was voted to pay all bills. Ruby Godfrey read the Annual Historian’s Report.
The 10-year class of 1961 was recognized by Helen Wallace West, one of the members of that class.
The Program Committee then took over with theme “Signs of the Times.” 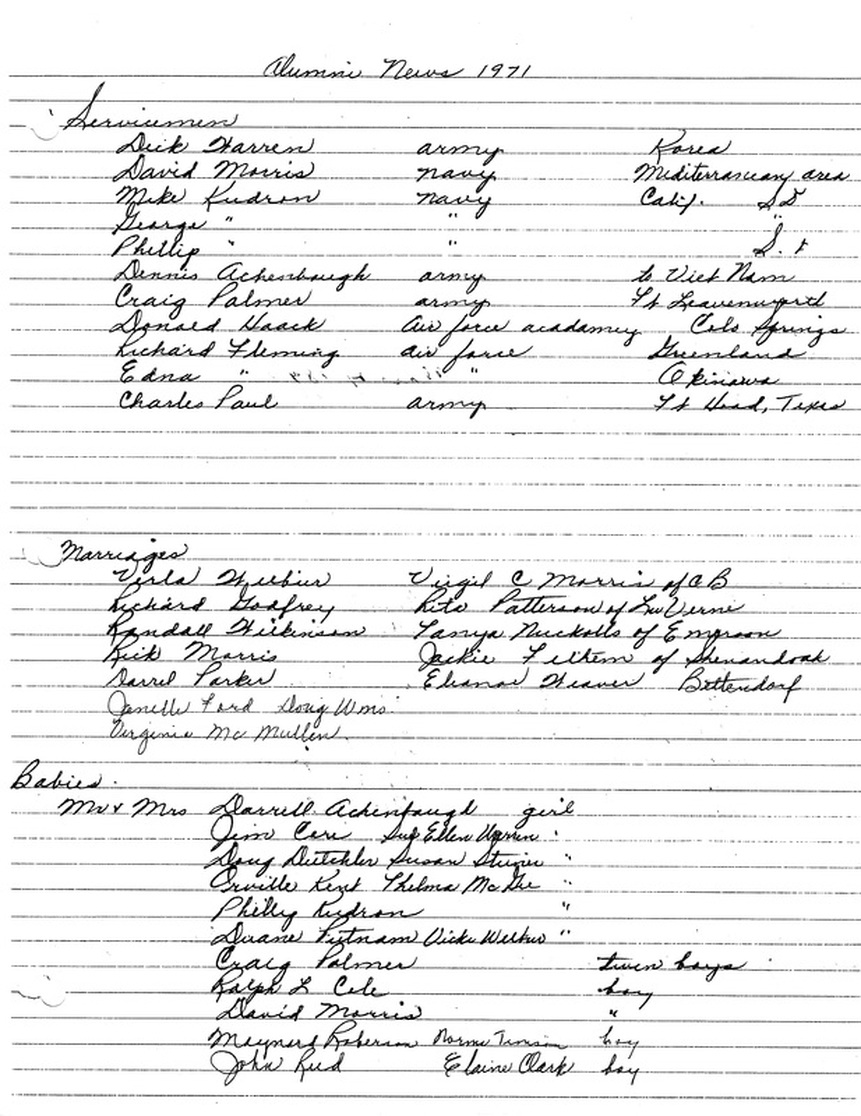 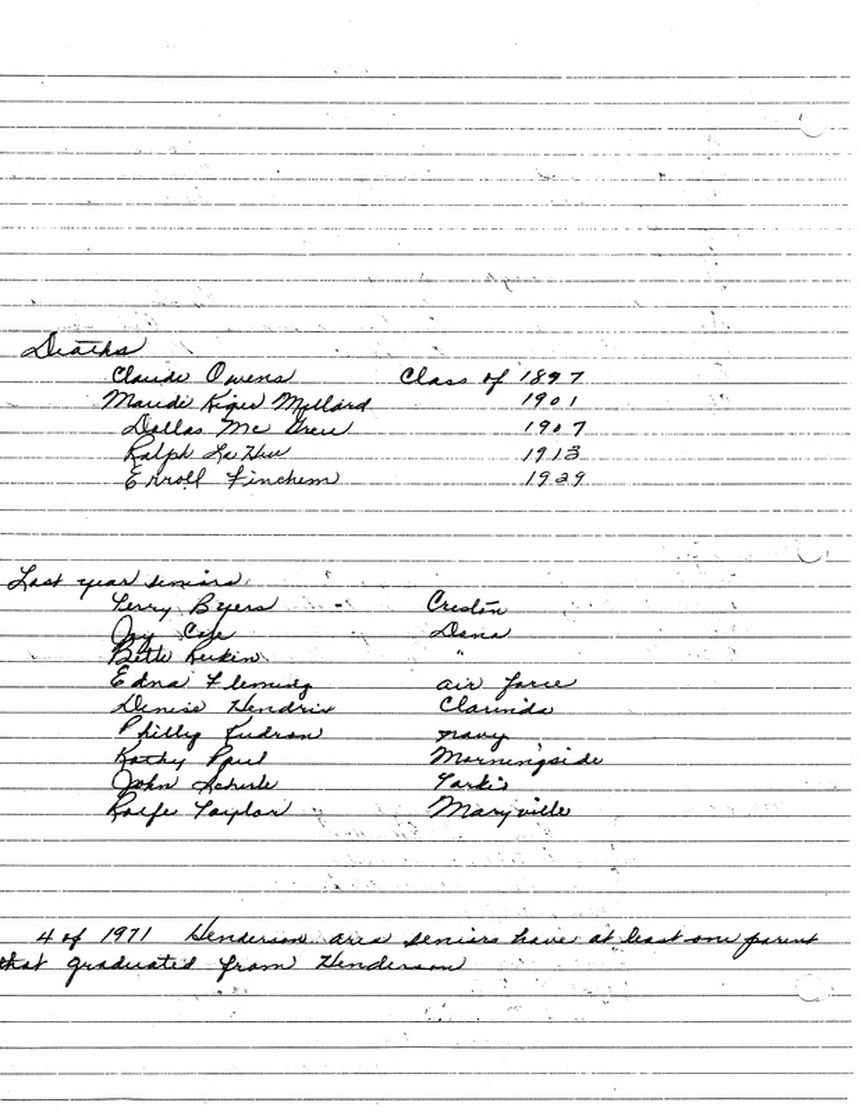 The 57th Annual Henderson High School Alumni Banquet was held Friday, June 9, 1972 at the Gold Crown Inn, Red Oak, Iowa. Registration at 7:30 and the buffet dinner at 8:00 p.m. were attended by approximately 110 alumni and guests. Eight graduates from the 1972 class of Nishna Valley High School were honored guests. Charles Paul mastered the task of Master of Ceremonies. The new graduates were welcomed into the Alumni Association by Abbie Duysen. Response from the seniors was given by Shirley Duysen.
President LaDonna (Ross) Stephens presided over the business meeting. The Secretary’s Report was read and approved. Treasurer’s Report showed a balance of $139.77. There was no unfinished business. New business: After discussion the motion was made that future banquets be held on the second Friday of June each year at the Gold Crown Inn, Red Oak, Iowa. Motion seconded. Motion carried. After discussion the motion was made that we send invitations again in ’73 for the last time informing Alumni members of the latter action. Second to the motion. Motion carried. After discussion the motion was made that reservations be paid in advance from now on. Motion seconded. Motion carried. The President appointed a committee to see about and take care of the trophies in Henderson School Building in the event of the sale of the building. The following were appointed: Steve Steiner – Chairman; Herman Coppock, Sy Brown, Barbara Shook Frink and Elizabeth Sutton Edmondson.
The Nominating Committee submitted the following names to serve as officers for 1973:

Motion was made that these officers be elected. Second to the motion. Motion carried.
The Historian’s Report was given by Ruby Smith Godfrey.
Business meeting adjourned.
Entertainment was provided by music students from Nishna Valley High School and several piano selections by Richard Fleming. Gayle Boileau Gravett was given special recognition as a 50-year graduate. 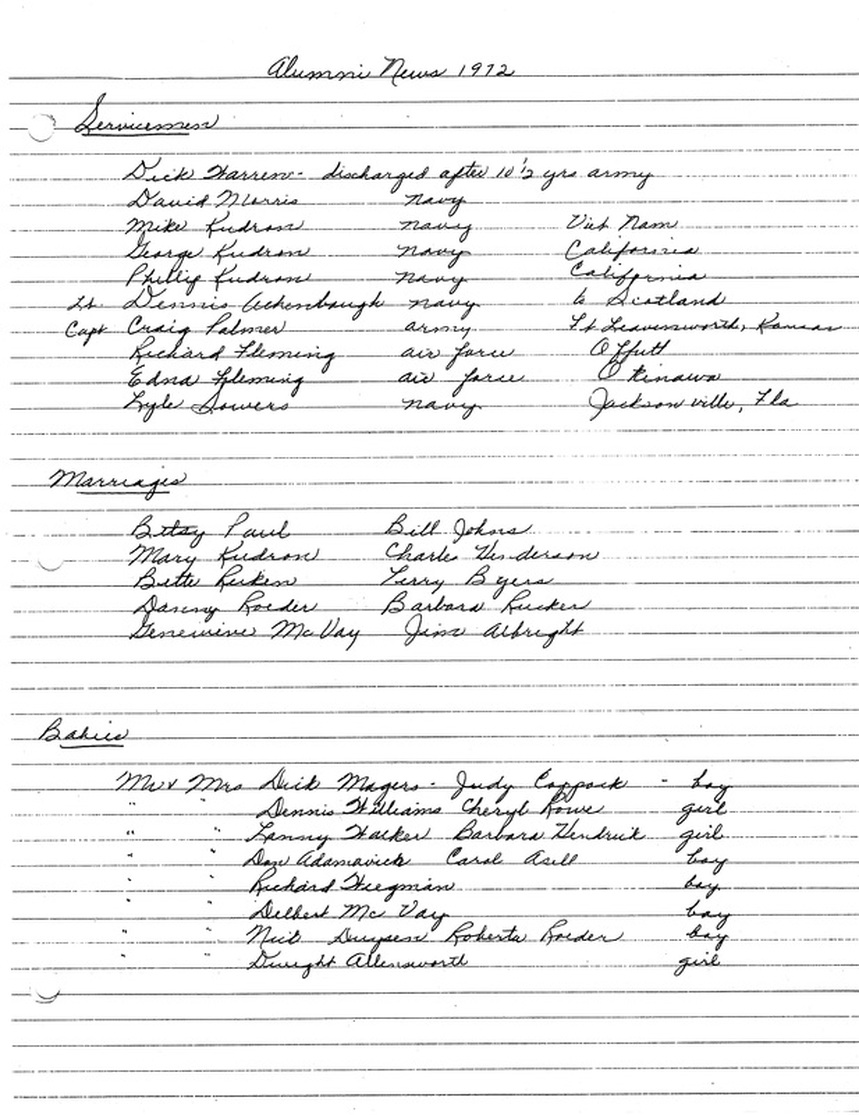 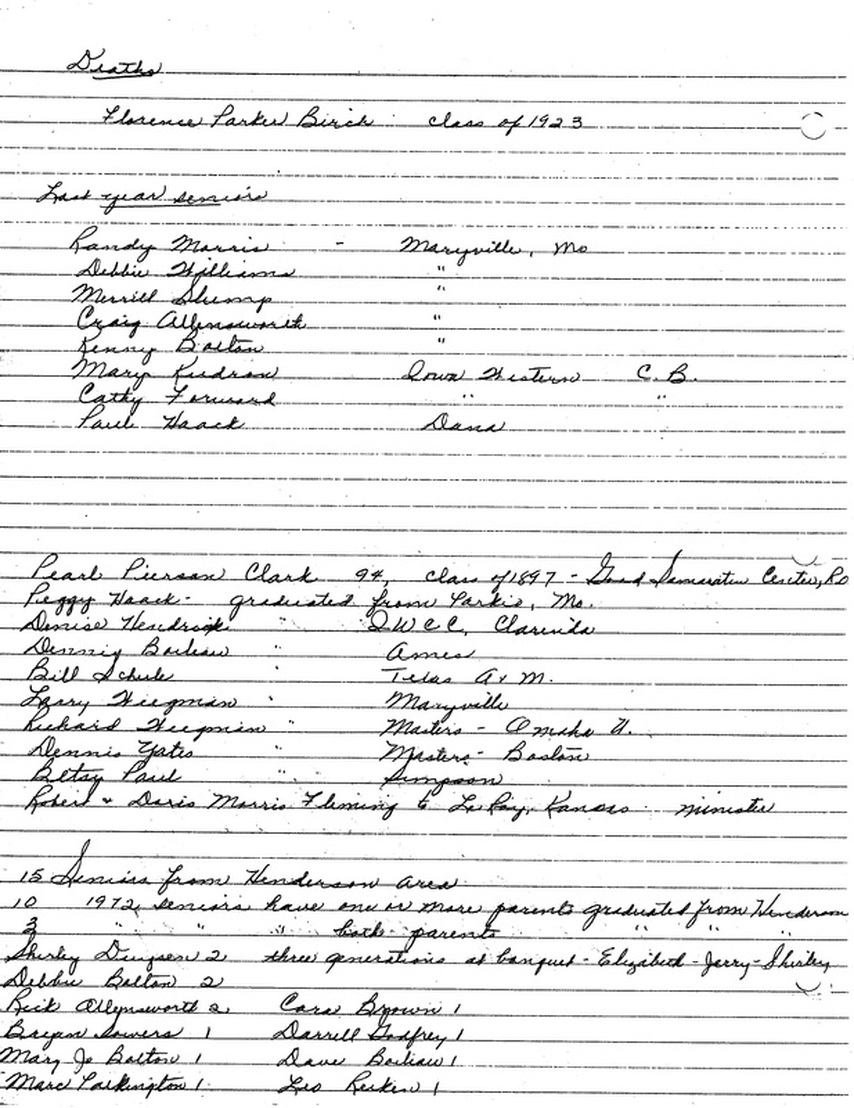 The 58th Annual Henderson High School Alumni Banquet was held June 8, 1973 at the Gold Crown Inn, Red Oak, Iowa. The 8:00 p.m. buffet dinner was attended by 100 Alumni members and guests. Three of the Henderson graduates from Nishna Valley High School Class of ’73 were honored guests. Charles Paul was Master of Ceremonies. The new graduates were welcomed into the Association by Elizabeth Edmondson. Response for the seniors was given by Becky Allensworth. Mrs. Jessie Cool Barkey and Mrs. Viola Walker Parks were the oldest members attending. They were graduates of the Class of 1911.
Minutes of the previous meeting were read and approved. Treasurer reported a balance of $74.50. No old business. New business: Discussion of Alumni Association taking a part in helping the Henderson Little League with the upkeep, etc., of the Henderson School Building, Gym and grounds they recently purchased. Jerry Duysen agreed to represent the Alumni Association at future meetings of the Little League and Community. It was also suggested that the Executive Committee, next year, make certain we do not have to compete with an orchestra during business meeting. The Nominating Committee presented the following names for officers for 1974:

Ruby Godfrey gave the Annual Historian’s Report. It was noted that the Class of ’43 was having their 30-year Class Reunion over the weekend. Correspondence was read from the wife of former Superintendent Rex Dory, as well as from others.
Business meeting adjourned. 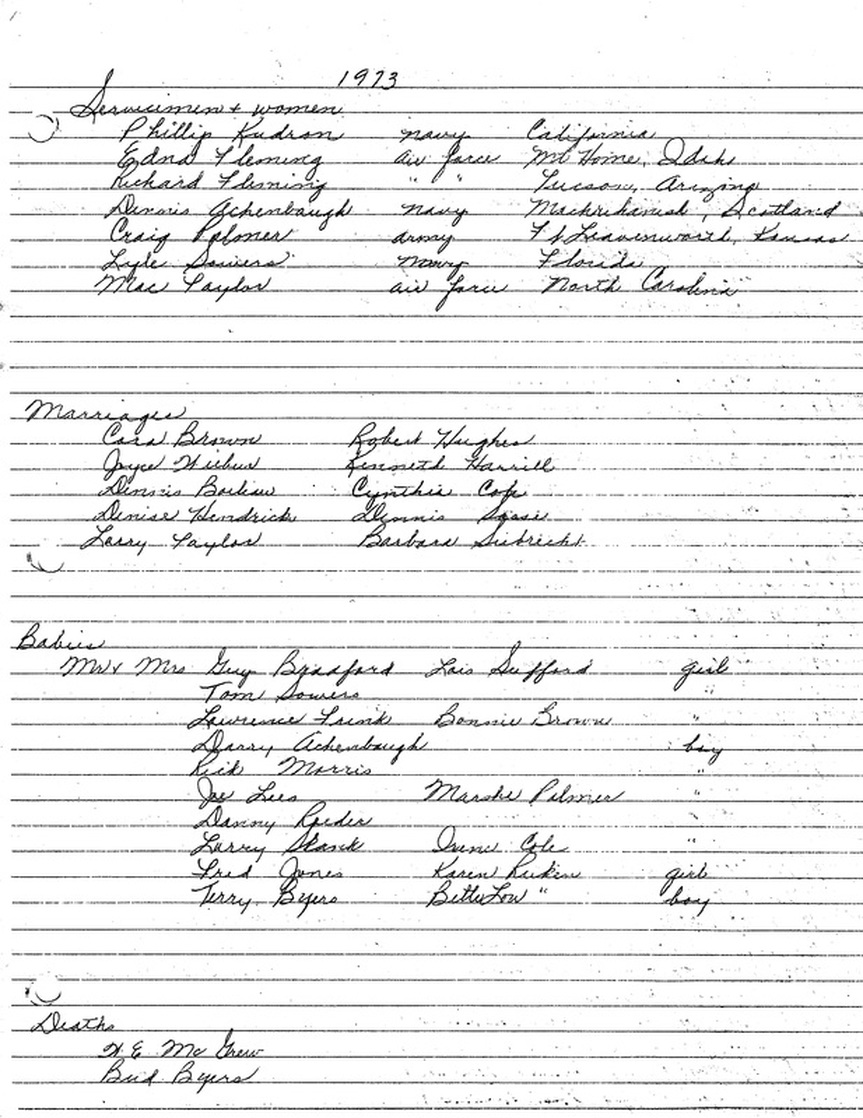 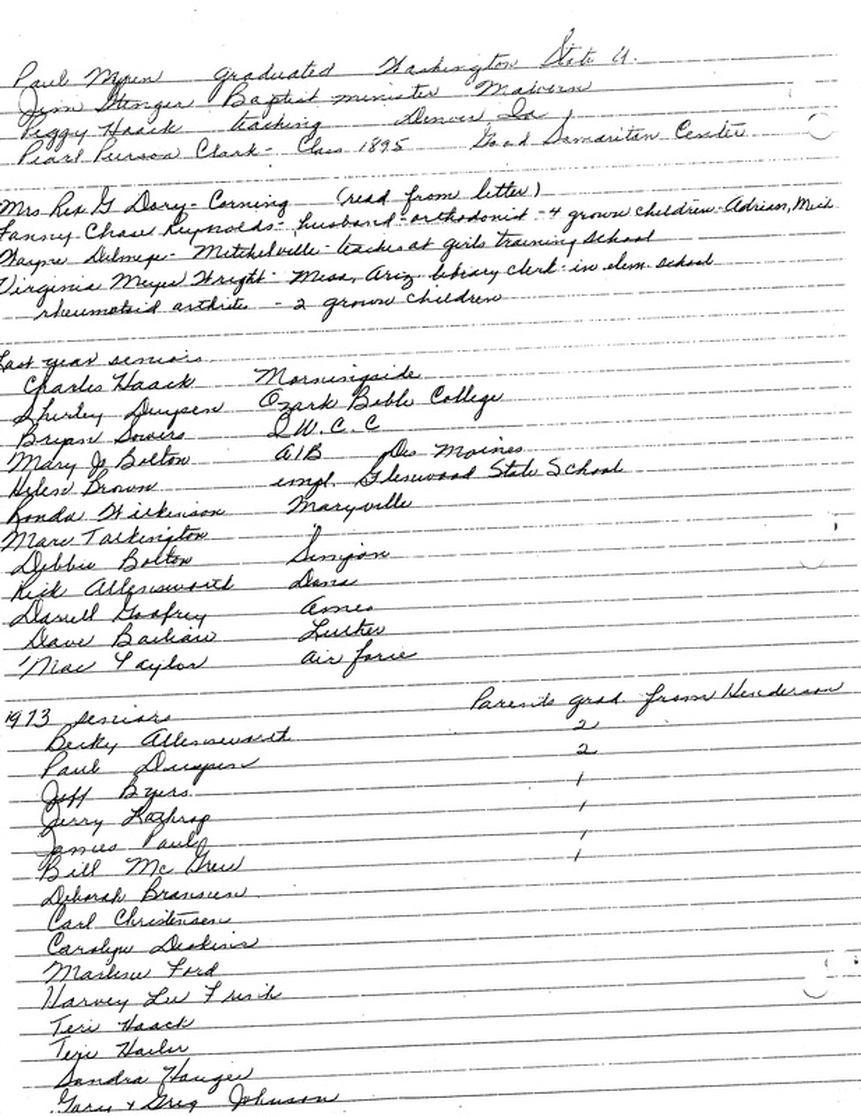 The 59th Annual Henderson High School Alumni Banquet was held June 14, 1974 at the Gold Crown Inn, Red Oak, Iowa. The buffet dinner was attended by 57 members and guests. One Henderson graduate from the Nishna Valley High School Class of ’74 was honored.
Doug Allensworth, President, gave a welcome to all members and guests. A welcome was given by Wanda Williams to the 1974 Class. Response for the seniors was given by Ron Williams.
Because of few in attendance, Doug suggested sending cards again. Don Pendegraft volunteered to print and send out invitations.
Minutes of the previous meeting were not read because of absence of the Secretary. Treasurer’s Report was given with a balance of $49.60.
New business: Ruby Godfrey made a motion to change places to have the Banquet next year. Charles Paul seconded the motion.
Discussion was held to have the President each year be the Master of Ceremonies. Motion was made and seconded. Minnie Allensworth wanted help with pictures of certain years. The Nominating Committee presented by Pauline Shook Perry the following names for officers for 1975: 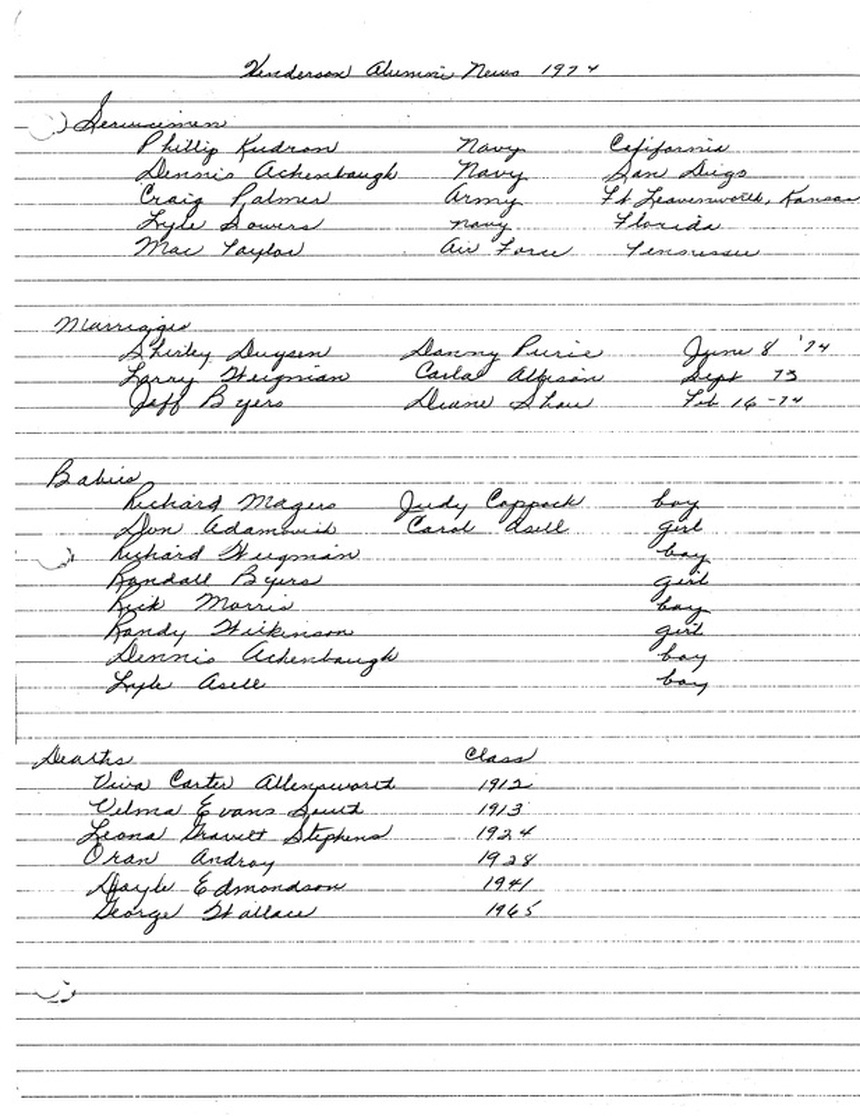 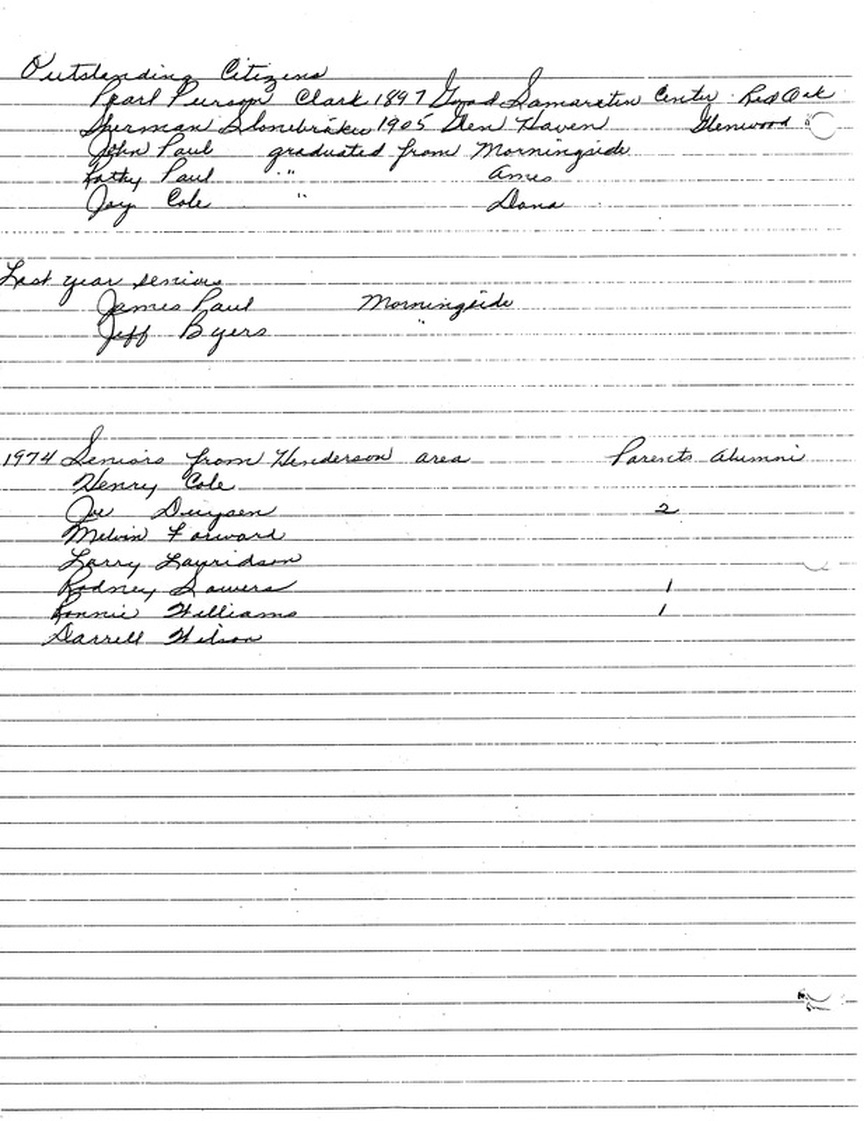 The 60th Annual Henderson Alumni Banquet was held June 13, 1975 at the Holiday Inn in Red Oak. The burffet dinner was attended by 92 members and guests. One Nishna Valley 1975 graduating senior was honored. Charles Paul, President, welcomed all members and guests. A welcome was given by Mrs. Velda Myers to the 1975 class. Response for the seniors was given by Dale Fleming.
Minutes of the previous banquet were read and approved. Treasurer’s Report was given by Barbara Frink with a balance of $68.23. Historian’s Report was given by Ruby Godfrey.
New business: A motion was made and seconded we hold our banquet at the Holiday Inn again next year. Bill Harbor moved, seconded by Judy Magers, we send out invitations again next year. The Nominating Committee presented by Wanda Williams the following officers for 1976:

The business meeting adjourned.
As each person introduced themselves they told who their classmates were and any interesting things that happened to their class. Minnie Viner and Minnie Allensworth were recognized as the 50-year class. Ervin Hall told how the Henderson Alumni Banquet started. 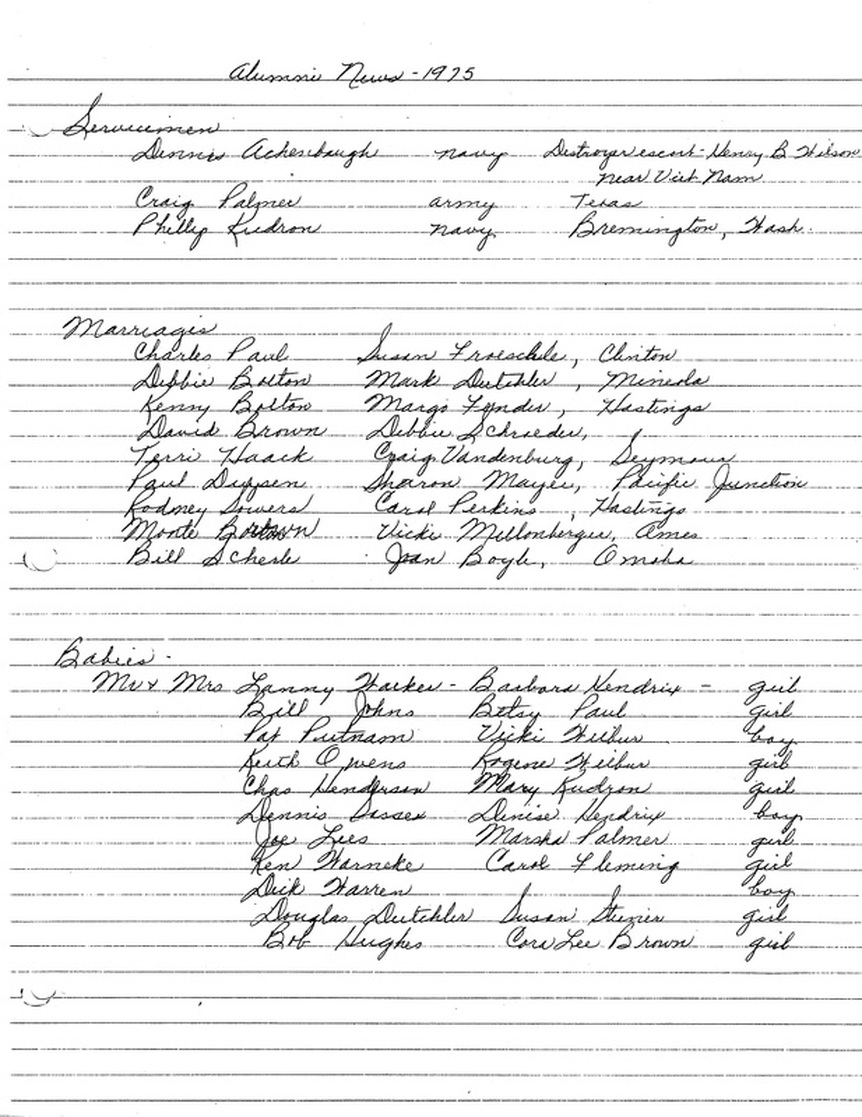 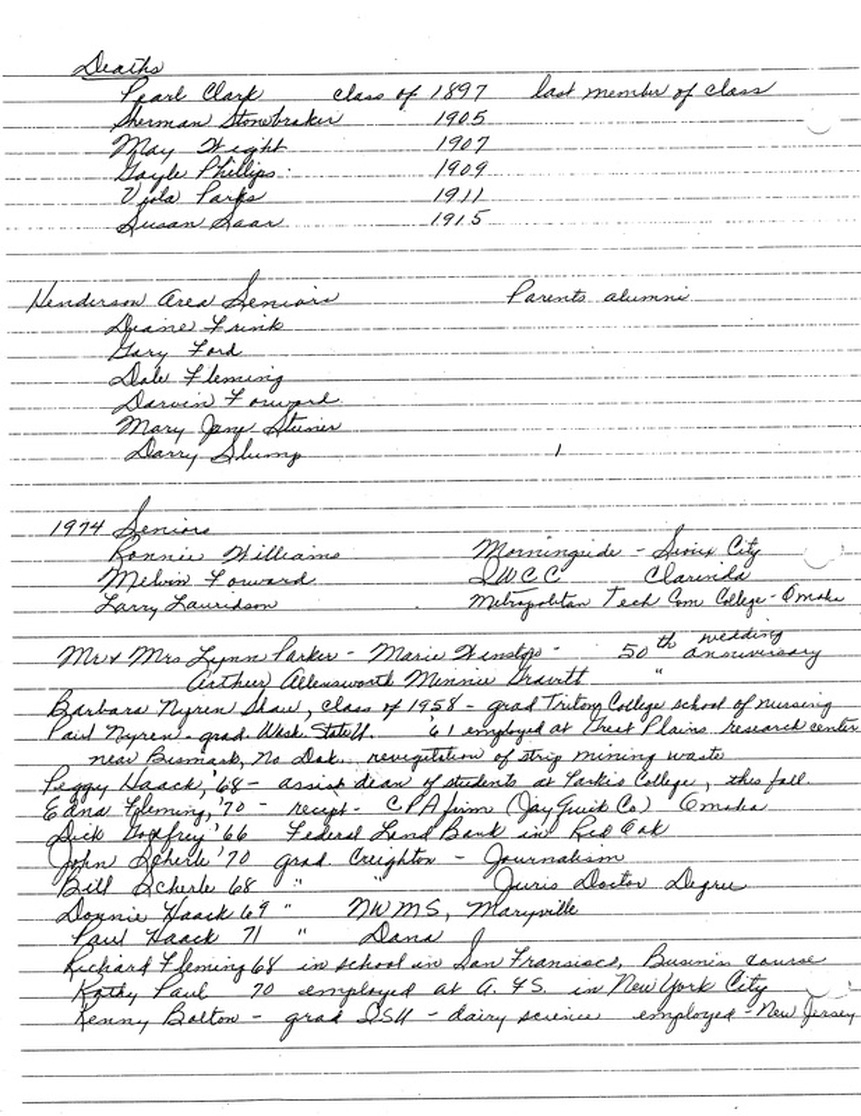