The 66th Annual Henderson Alumni Association Banquet was held at the Little League Gym Saturday, May 23, 1981 with 123 graduates and their guests present. The roast beef dinner was catered by Mickels of Harlan.
After the delicious meal the meeting was called to order by President Bob Stille. Minutes of the 1980 meeting were read and approved. Velda Myers gave the Treasurer’s Report with a balance of $12.42. A motion was made and seconded to accept the Treasurer’s Report and it was so voted. The motion was made and seconded that all bills be paid and it was so voted.
The Nominating Committee presented the following names for offices for the coming year:

Ruby Godfrey gave the Historian’s Report.
Judy Magers gave the welcome and Libby Magers gave the response.
The roll call of classes was held with graduates introducing himself and guest.
The 50-year class which was 1931 was honored:

Nellie Wilkinson gave a report on all of her classmates.
Guests were in attendance from California, Arizona, Nebraska and many other Iowa towns. 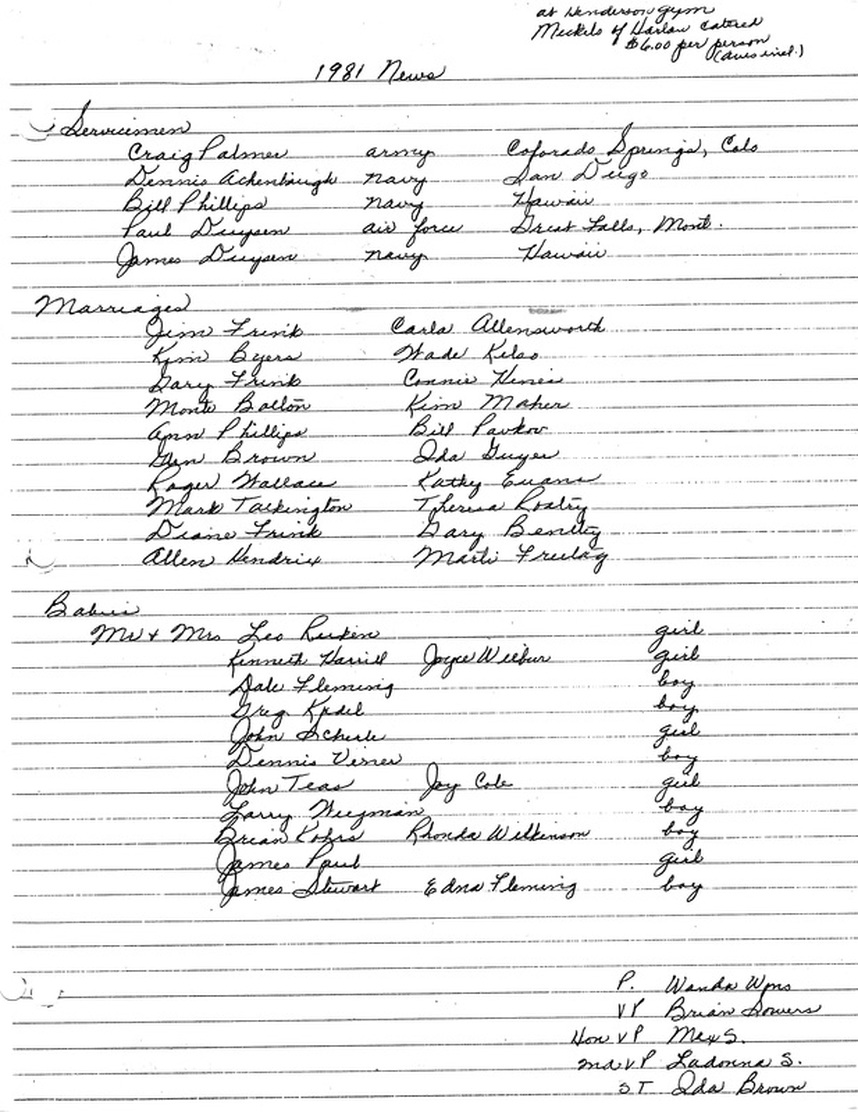 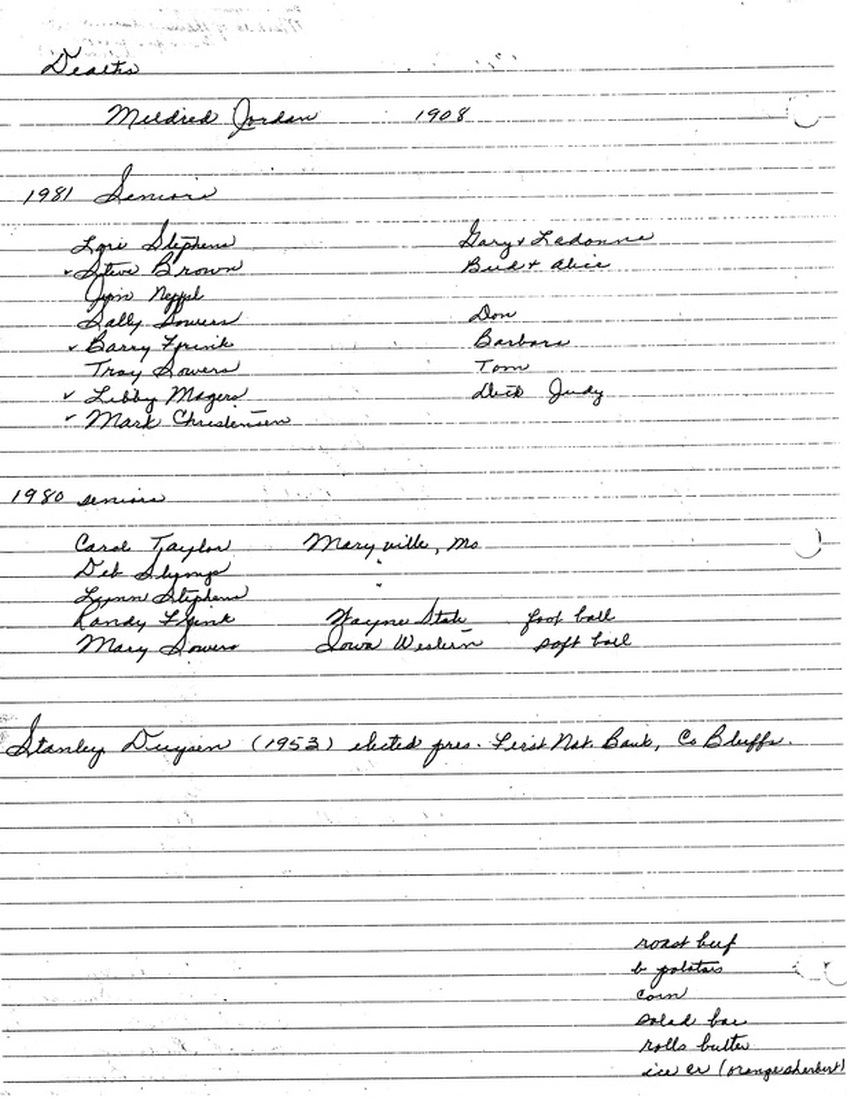 The 67th Henderson High School Alumni Banquet was held in the new Firehouse on Saturday, May 29th, 1982 with 91 persons attending. We opened with the pledge to the flag followed by all singing “America the Beautiful” as our Invocation and to commemorate Memorial Day. The roast round of beef dinner was catered by Mickel’s Restaurant of Harlan. It was decided to have Mickel’s cater the dinner in 1983.
A silent auction followed the dinner which netted our treasury $51.00. There was approximately $25 in donations also.
The Business Meeting was called to order by President Wanda Williams. The welcome was given by Bill Harbor and a response by Pearl Norton Greeley of Long Beach, California. The minutes of the 1981 Alumni Banquet were read and Ida Brown reported a bank balance of $4.15. A motion was made and seconded to approve both Reports and motion carried.
A motion was made and seconded to pay all bills, also to donate $25 to Firemen for use of the Firehouse. Motion carried.
Historian’s Report was given by Ruby Godfrey.
The Nominating Committee comprised of Judy Magers, Chairman; Bill Harbor, Pauline Shook and Glenn Brown presented the following names for 1983 officers:

Motion made and seconded that we accept officers as nominated. Motion carried.
President Wanda Williams read a write-up of the 1st Alumni Banquet held in 1916. Wanda also read a letter from Clifford Plumb, a 1907 graduate from Henderson School – almost 90 years old. He sent a $10 donation to the Association.
For new business: Thanks were given to Bill and Margaret Darnell for their sign welcoming Alumni members, on the north edge of town. Bill Harbor was appointed to form a committee to see about getting a trophy case made or purchased to store the athletic trophies of years past.
The Roll Call of Classes began with Gayle Boileau Gravett of the Class of 1922.
The 50-year Class, 1932, was honored and 6 out of 9 attended. Each gave an account of his or her life since graduation.
1983 Banquet to be held May 28 (Saturday night). 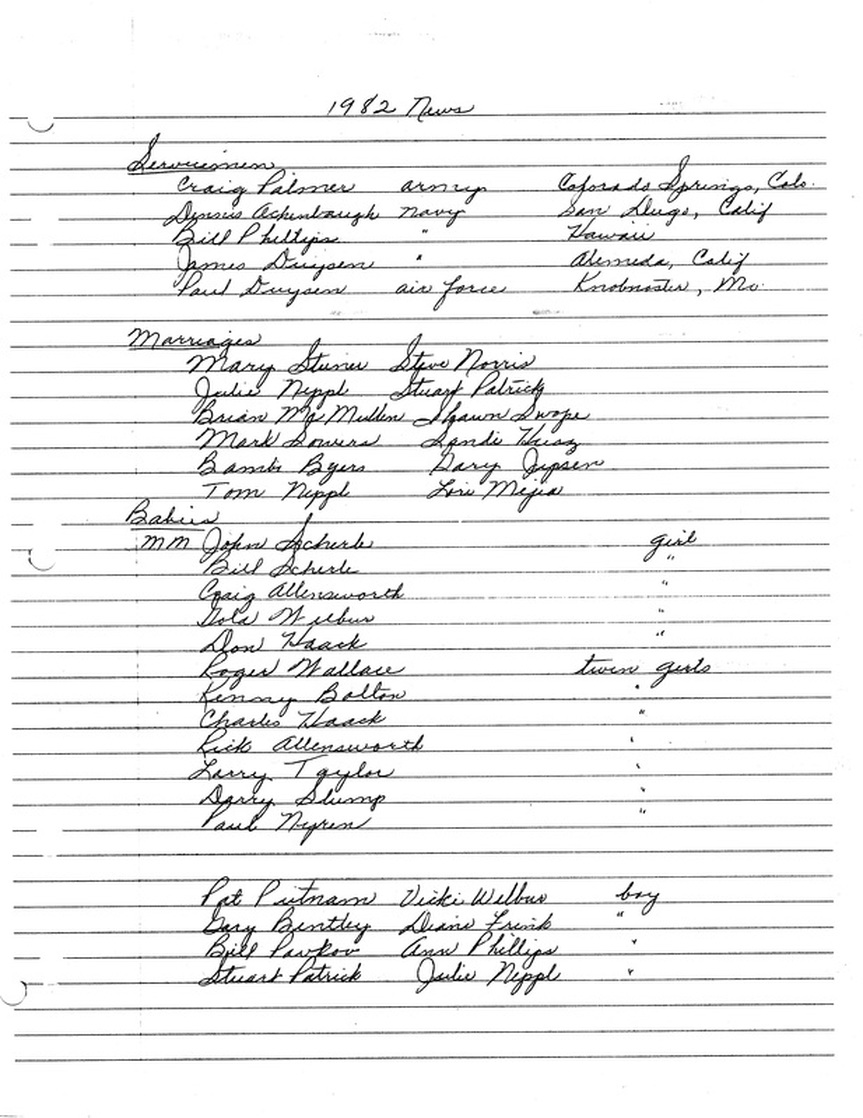 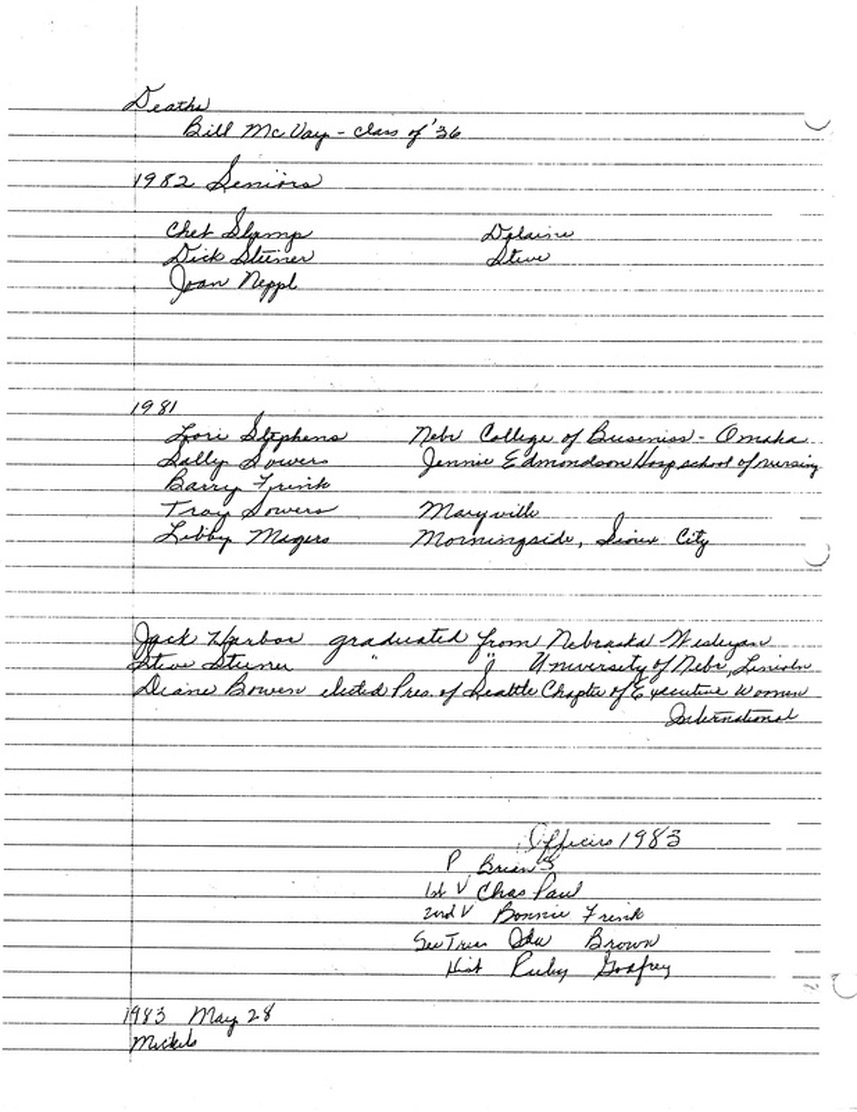 The 68th Henderson Alumni Banquet was held at 7:00 p.m., May 29th in the Little League Gym (Saturday night) with 72 members and guests attending. We had a roast beef dinner catered by Mickel’s Restaurant from Harlan. Cost was $6.50 per member and guest, including all dues.
After a good dinner (pie plate), the Minutes of 1982 Banquet were read and approved (meeting called to order by President Bryan Sowers). Also approved was the Financial Report – a balance of $130.30 after all 1982 bills paid. Bill Harbor agreed to see about a Trophy Case for the athletic trophies of past years.
The Committee on Nomination of Officers, Bill Harbor and Elizabeth Edmondson, present the following names for nomination – 1984:

Motion was made and seconded that we accept officers as nominated – motion carried.
The 50-year Class, 1933, was presented and honored. Of the original seven, two members were here: Alta Forristall of Carson and Herbert Jones of Princeton, Illinois. Each told of their lives since graduation and Alta read two letters of others members – Maxine Leu Maxwell of Harlan and Lillie Kjielberg Replogle of Fort Dodge, Iowa.
There were seven members of the 40-year Class present out of the original 12 in the Class. Each gave an interesting account of his or her life. Ruby Godfrey worked hard at getting this Class together for a reunion.
There was a Roll Call of Classes starting with Juanita Melendy, Class of 1916, and Glen Sowers, Class of 1917.
A motion was made by Alta Forristall and seconded by Jim Holt that we pay all bills. Motion carried.
Probably because of a rain storm in late afternoon we did not reach our goal of 90 reservations with Mickel’s. We took in $468.00 at the Banquet. Later reservations were paid: Jess Brown – 3; Alice Brown – 2. $10.00 donation – Jo Ann Houser; $6.50 donation – Eva Livesy 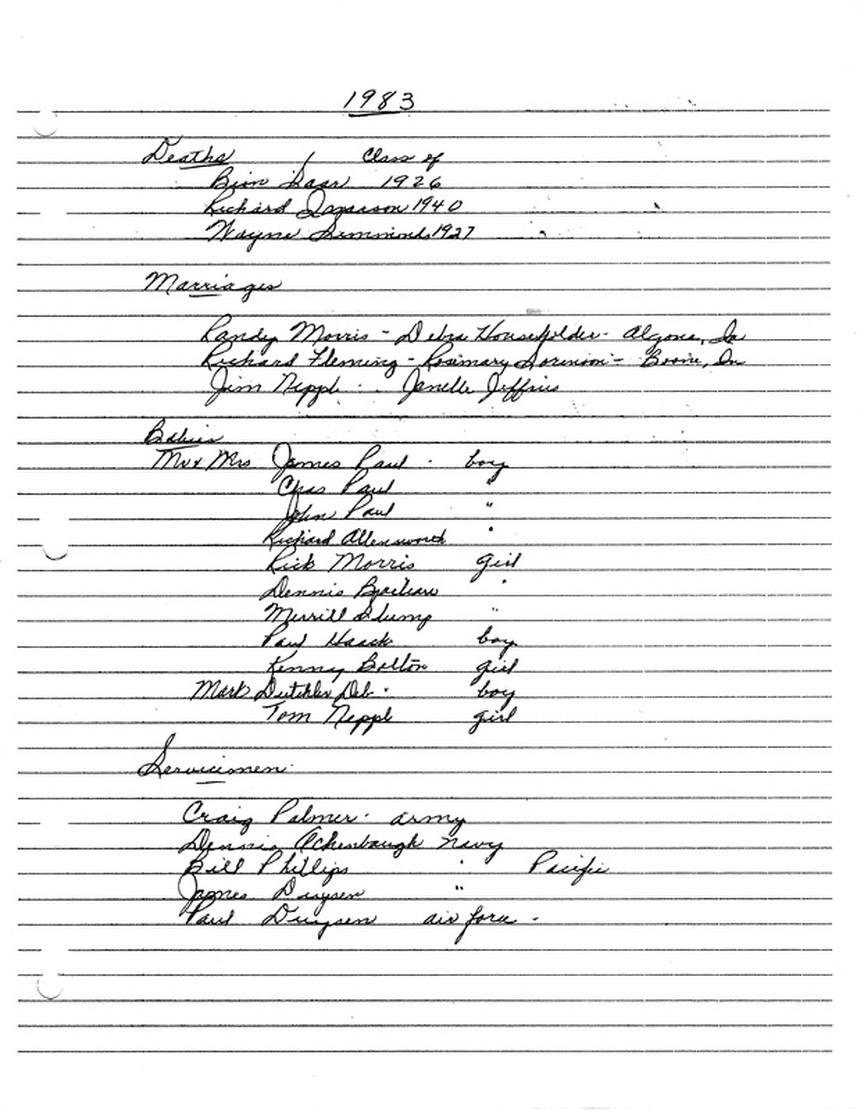 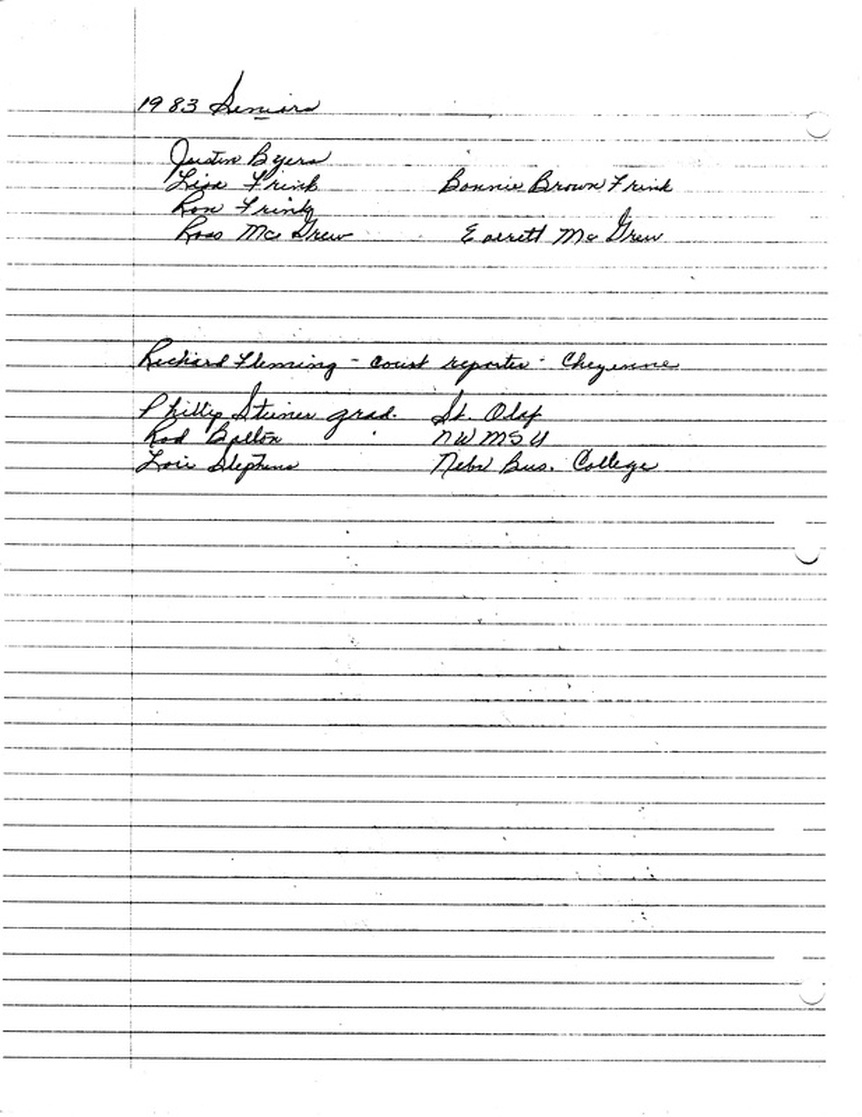 The 69th Henderson Alumni Banquet was held at 7:00 p.m., May 26th in the Little League Gym with 54 members and guests attending. We had a delicious roast beef dinner with salad bar served by members of the Little League. Cost was $6.50 including dues.
The Meeting was called to order by President Charles Paul. The 1983 Secretary’s Minutes were read and approved. The Treasurer reported a balance of $174.43, after all bills were paid.
Ruby Godfrey gave the Historian’s Report.
Harry Paul submitted the following Officers for 1985:

Harry made the motion that these officers be accepted, after asking if any nominations from the floor. They were elected by acclamations.
The 50-year Class of ’34 was presented. Only two out of a class of eight were present—Jessie Brown and Dale Allensworth—and told a little of what had happened to them since graduation. A class roll was called starting with the Class of 1925.
Bill Harbor told of the trophy case being built by Justin Byers and as the case is costing more than expected he would accept any donation.
The motion was made we pay all outstanding bills. Motion carried.
It was discussed how to increase our attendance. We will send out invitations to all Alumni next year. Little League will serve next year again, but will need to have $6.00 a plate. No further business, the Meeting adjourned. 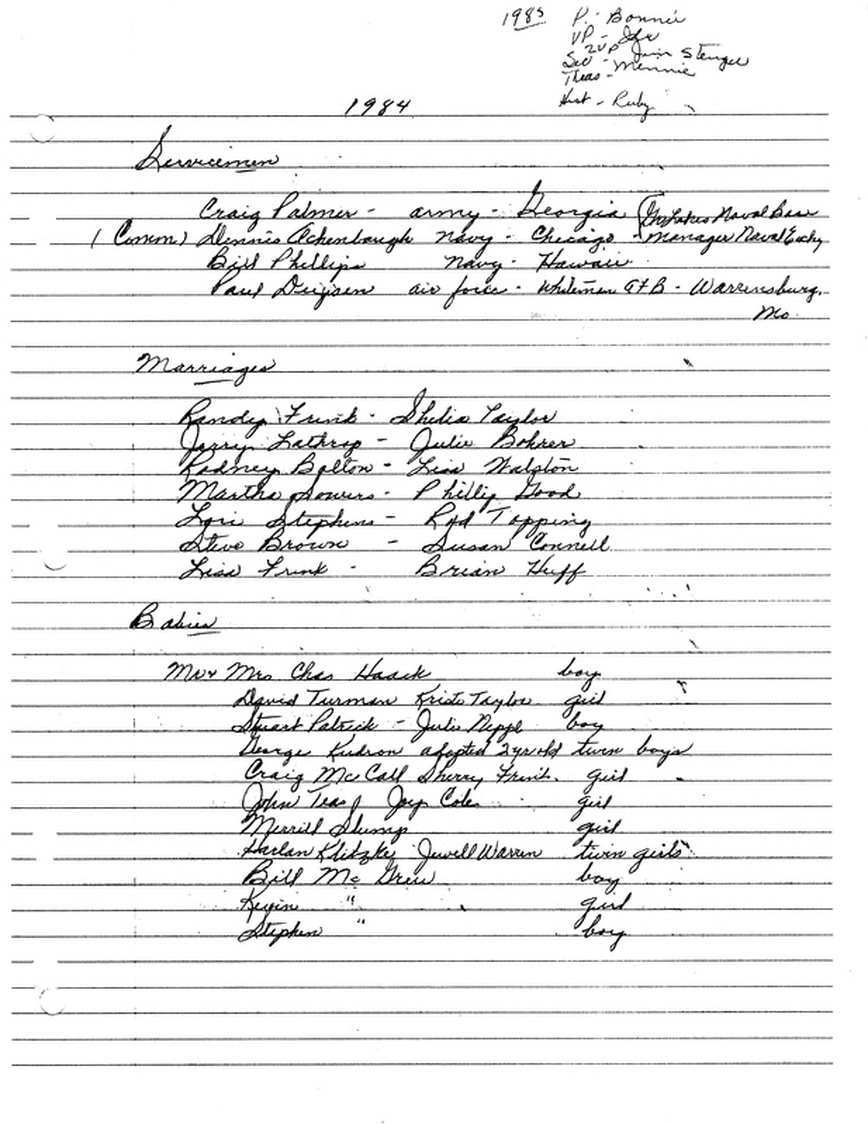 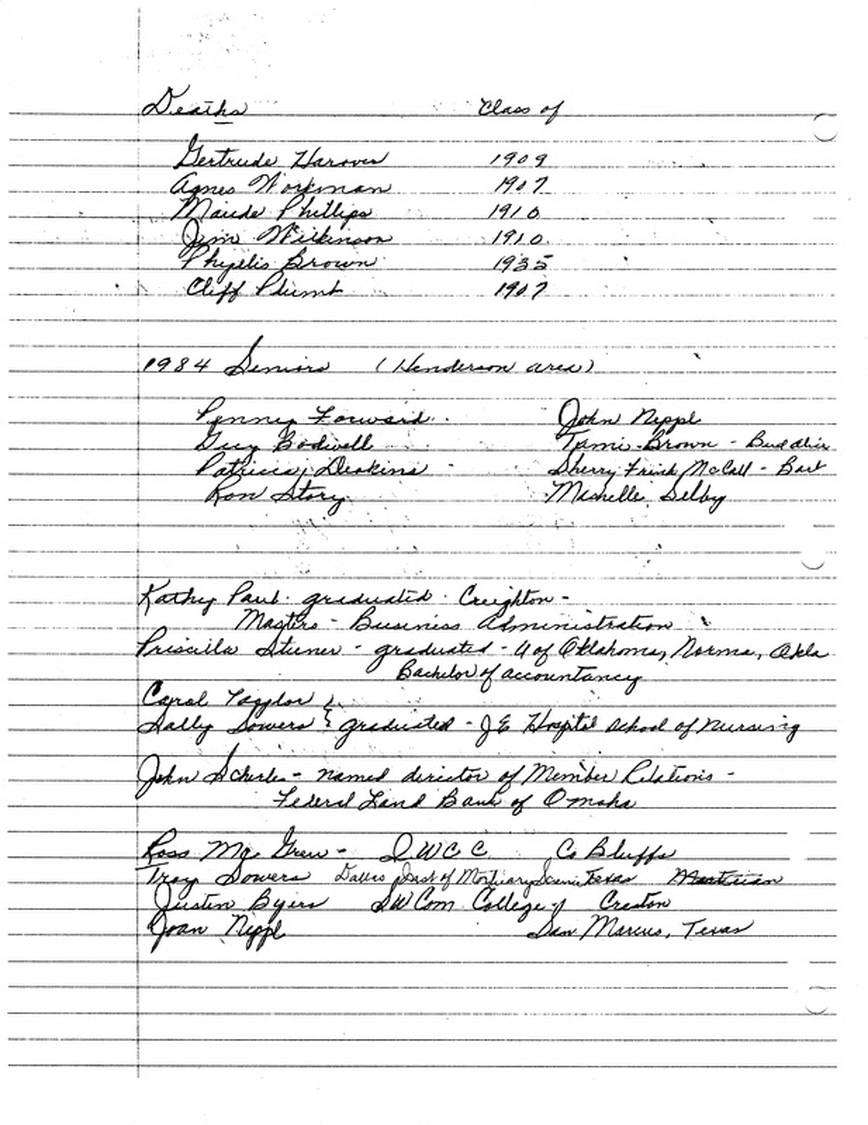 The 70th Henderson Alumni Banquet was held at 7:00 p.m., May 25th in the Little League Gym with 90 members and their guests attending. We had a ham dinner with salad bar served by members of the Little League. Cost was $7.00 including dues.
The Meeting was called to order by President Bonnie Frink. The 1984 Secretary’s Minutes were read and approved. The Treasurer reported a balance of $251.08 after all bills paid.
Ruby Godfrey gave the Historian Report.
Elizabeth Edmondson submitted the following officers for 1986:


On May 4th Bonnie Frink, Ida Brown, Jim Stenger met at my home to plan the Banquet. Following Committees were appointed: 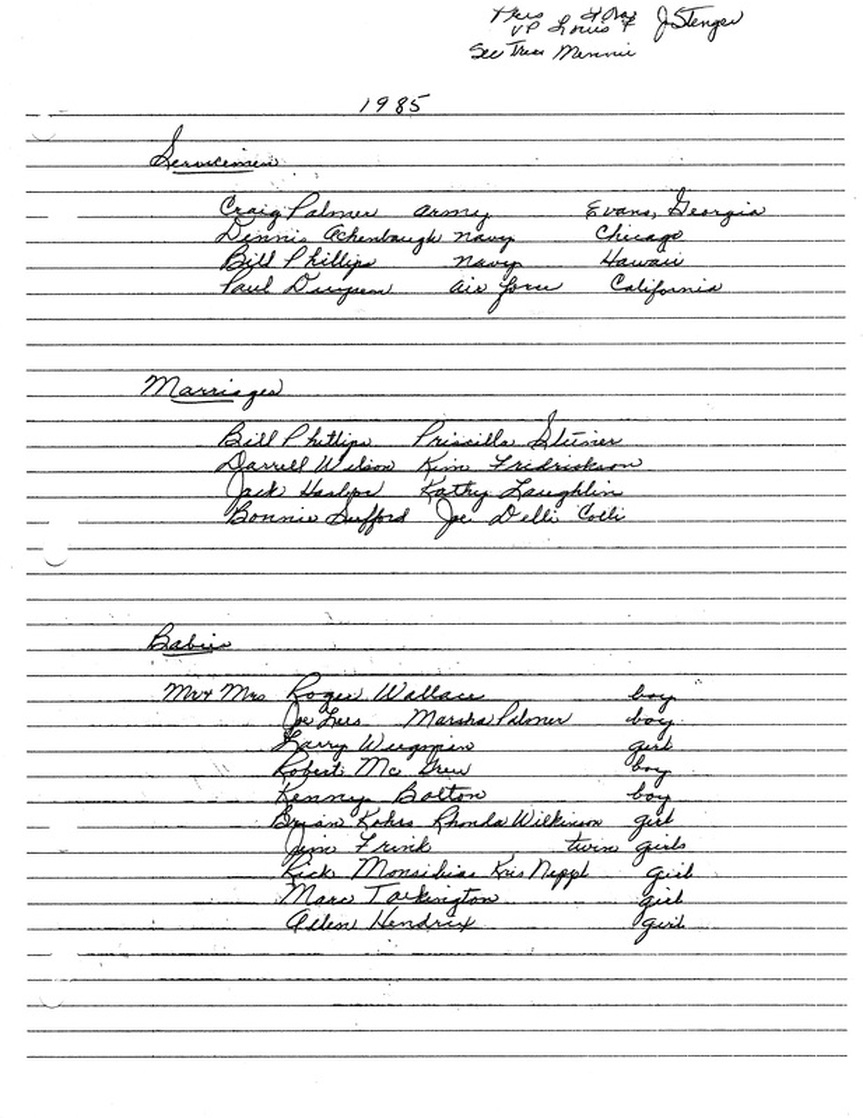 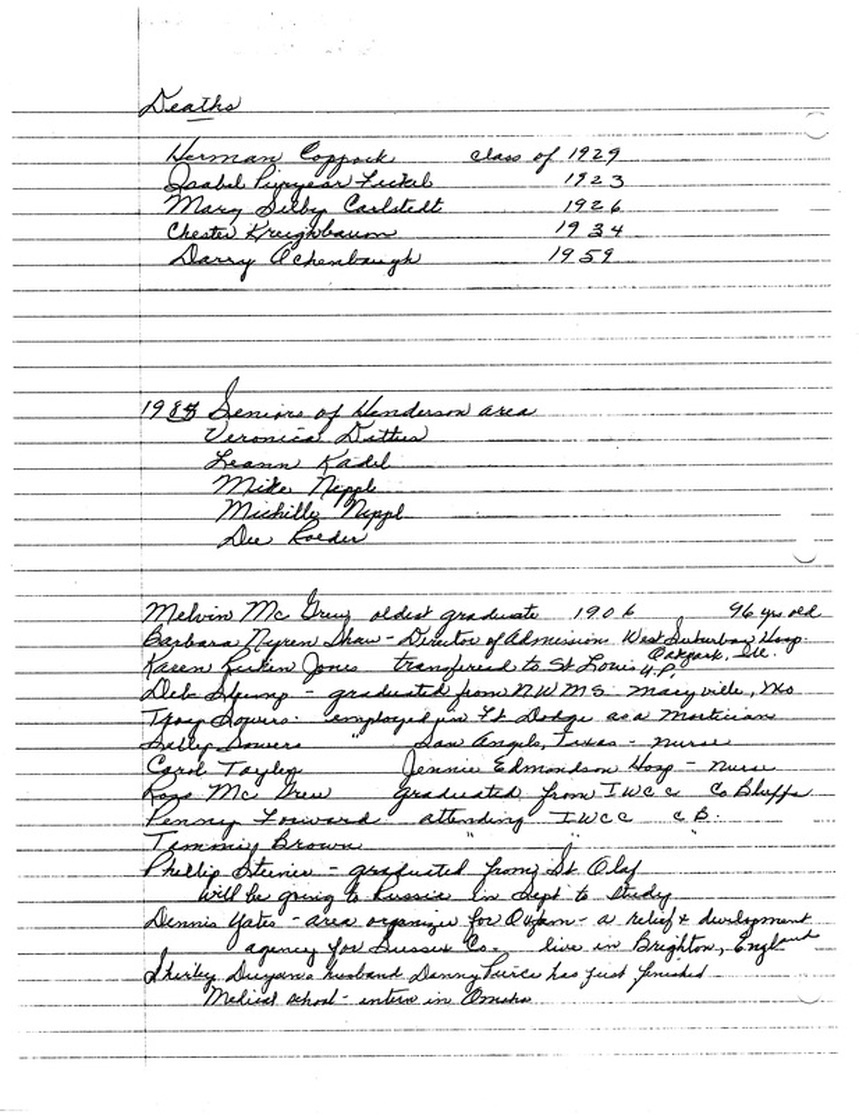