The 61st Annual Henderson Alumni Banquet was held June 11, 1976, at the Holiday Inn in Red Oak. The buffet dinner was attended by 75 members and guests. Two Nishna Valley 1976 graduating seniors were honored. They were Jo Kudron and Mike Stille.
Delaine Slump, President, welcomed all members and guests. The invocation was given by Jerry Duysen.
A welcome to the 1976 class was given by Bob Stille. Response for the seniors was given by Mike Stille.
Minutes of the previous banquet were read and approved. The Treasurer’s Report was given with a balance of $77.25. Historian’s Report was given by Ruby Godfrey.
New business: A motion was made by Bill Harbor we hold next year’s Banquet at the Henderson gym on Saturday night of Memorial weekend with the meal to be catered. Motion was seconded and passed. Barbara Stille gave some catering prices. Donnie Pendegraft moved we send out invitations next year. He and Gene Bolton agreed to pay part of the postage expenses. Motion carried.
The Nominating Committee presented the following officers for 1977:

Business meeting adjourned.
Jerry Duysen, Master of Ceremonies, then introduced each class. Genessee Stephens was recognized as the 50-year class. She was presented a corsage by the officers. She gave some interesting facts about the class.
The meeting was then turned over to the Program Chairman, Wanda Williams. Her Program was “Thru the Years.” She was assisted by Barbara Frink, Barbara Stille, and Minnie Allensworth modeling old clothes. Ruby Godfrey, Judy Magers, Charles Paul and Wanda gave important happenings of their high school days. Lots of old memories were restored. 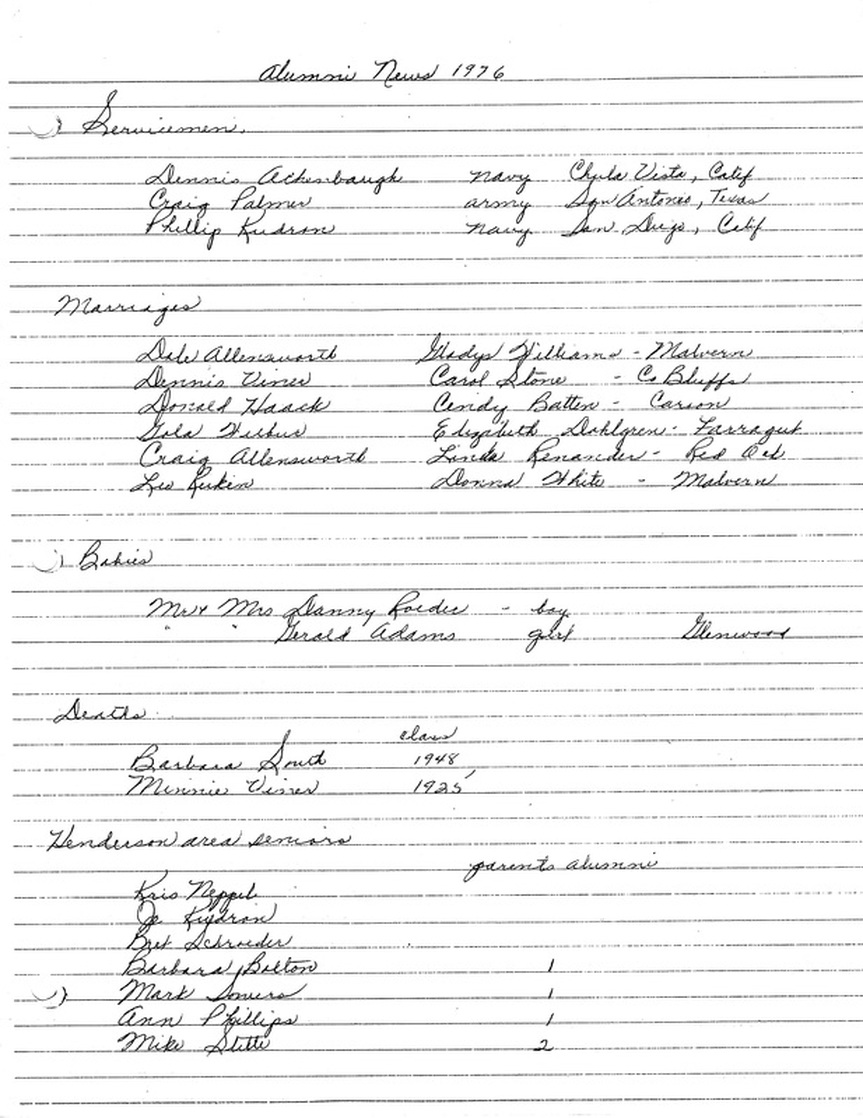 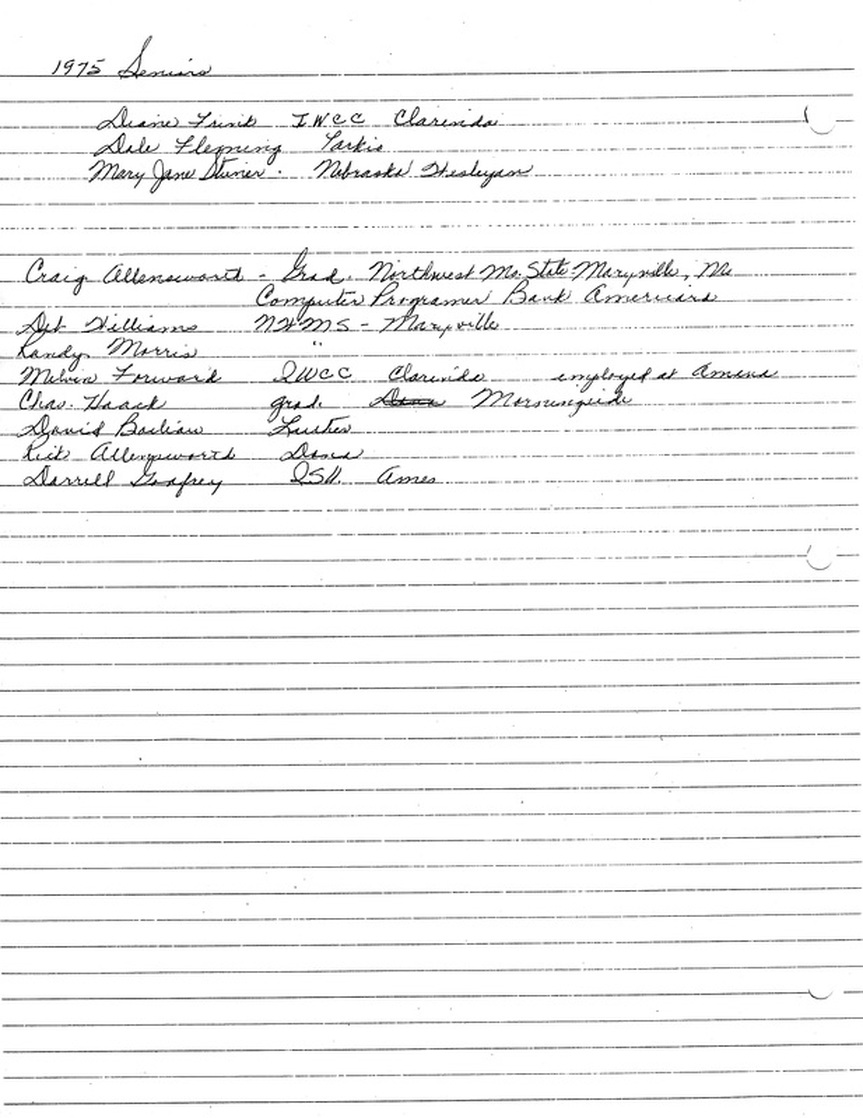 The 62nd Annual Alumni Banquet was held on Friday, May 27, 1977 at 7:30 p.m. at the Henderson Gym. The buffet dinner was catered by Mickel’s of Harlan, Iowa and was served to 105 members and guests. Steve Steiner, Jr., was the only 1977 senior graduating who attended.
The President of the Association was Steve Steiner, Sr., who presided over the business meeting. The Treasurer, Velda Myers, gave the Treasurer’s Report with a balance of $70.51. It was voted to pay all bills. Minutes of the 1976 Meeting were read and approved. Ruby Godfrey gave the Historian’s Report.
The President asked for a discussion as to where to have the Banquet in 1978. There was a motion and a second to have it at the Henderson Gym. It was so voted.

New officers nominated by the Committee were:

The Business Meeting adjourned.
Donnie Pendegraft called for recognition of all by classes. Melvin McGrew was the oldest Alumnus attending, having graduated in 1906.
The Program was on the order of the ‘Gong Show’. Donnie Pendegraft was Master of Ceremonies, with assistance from Shirley and Abbie Duysen, Virginia Bowen, Jerry Duysen, DeLaine Slump, Bernadine Pendegraft and Wanda Williams.
Before and after the Program, pictures of the Graduates of most years were on display and much appreciated. Most of the Championship Basketball Teams of 1929 and the early ‘30s were in attendance. There was much enjoyable reminiscing. 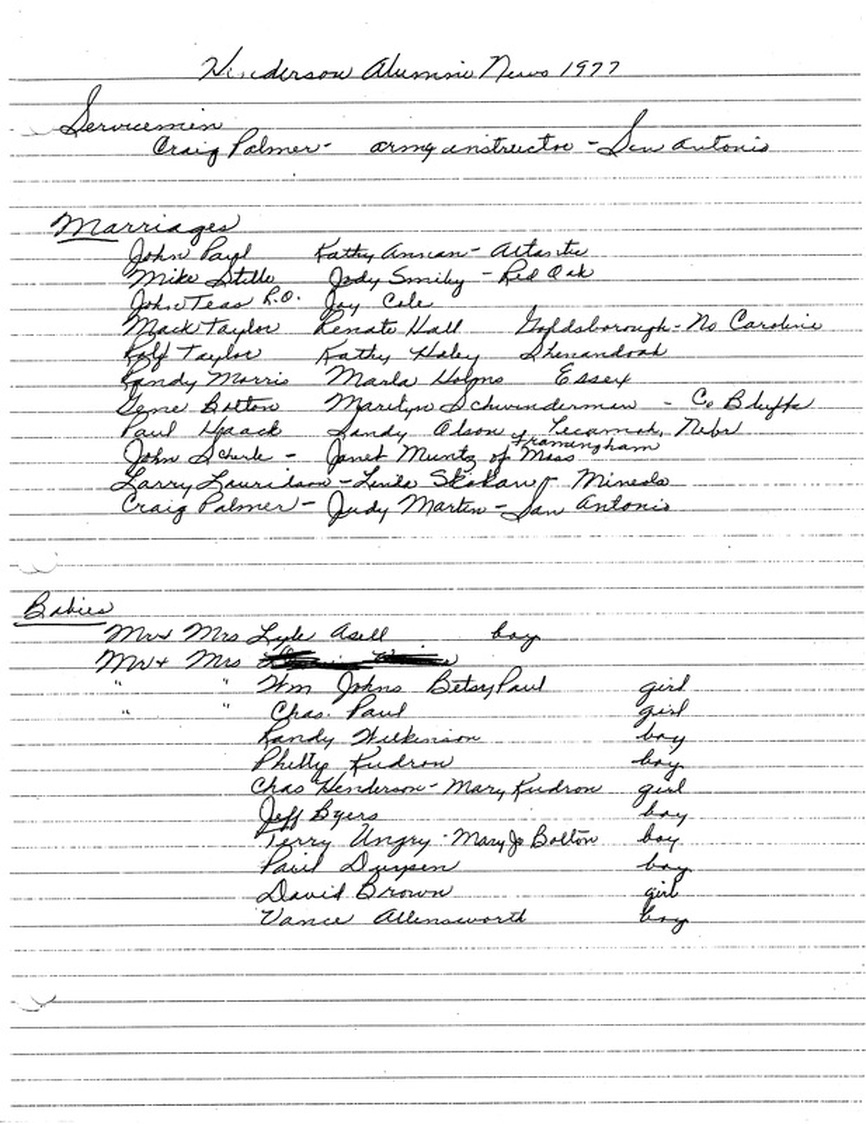 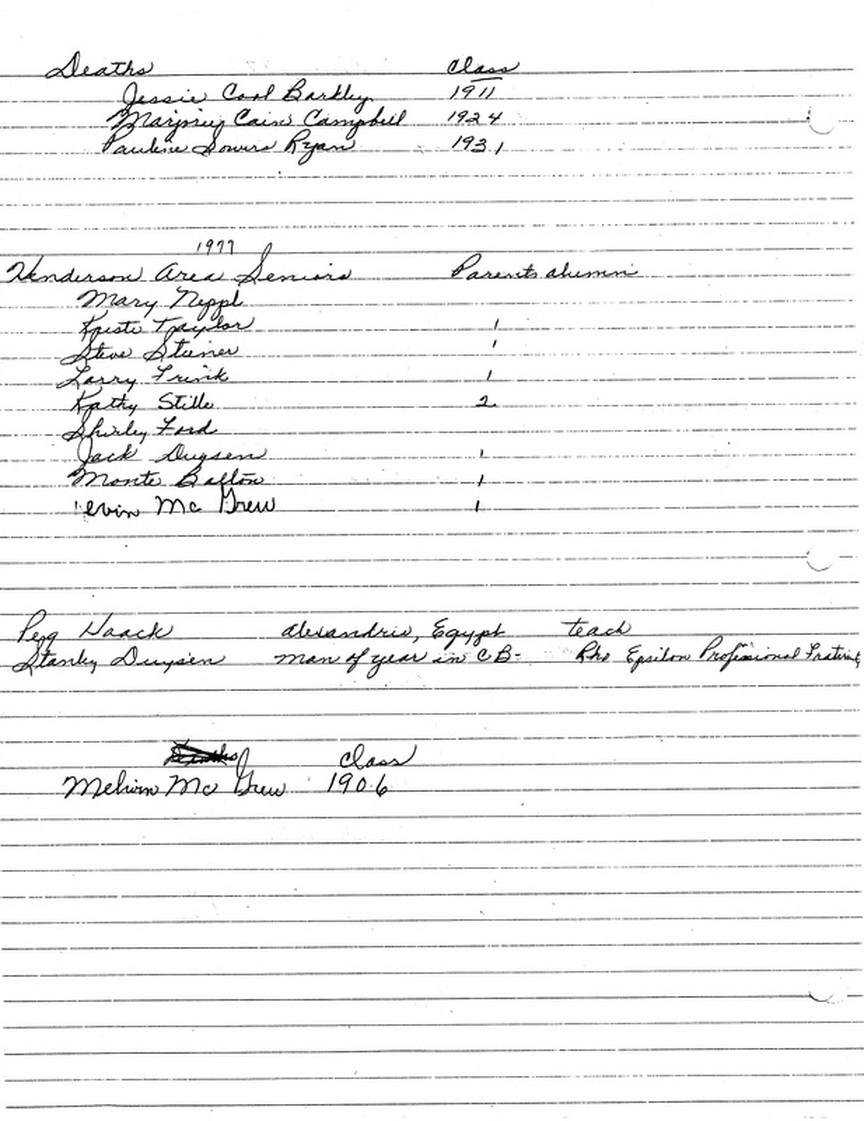 The 63rd Annual Alumni Banquet was held Saturday, May 27, 1978 at 7:30 p.m. at the Henderson Gym. The buffet dinner was catered again this year by Mickel’s of Harlan, Iowa. There were 90 members and guests present. Gary Frink was the only member of the 1978 Graduating Class that was in attendance.
Representative William H. Harbor conducted the business meeting. Minutes of the 1977 meeting were read and approved. Treasurer Velda Myers gave the Treasurer’s Report with a balance of $168.82. It was voted to accept the Treasurer’s Report. Bills for the following were presented:

It was moved and seconded to pay all bills and it was so voted.
Ruby Godfrey gave the Historian’s Report.
Jo Ann Houser, Chairman of the Nominating Committee, then placed the following names in nomination:

No other names were placed in nomination, so the names given were approved.

The Business Meeting was adjourned and the Program was turned over to Donnie Pendegraft.
Barbara Frink gave the Welcome to the Seniors and Gary gave the response.
Donnie then called for recognition of all by classes. Marie Parker was of the oldest Class represented having graduated in 1921. Seven sisters of the Jim Simmonds family were in attendance, some having come for the first time since graduating. The former Frances Whitehead and Charles Smith were also given recognition. The Glenn Brown family was all in attendance. Several graduates of other years sent their regrets.
Wanda Williams was Chairman of the Program Committee, and the entertainment was then turned over to her. While her group were preparing for their parts in the Program, there was a discussion as to the 1979 Banquet. It was suggested the time and place be the same as this year, so peop0le coming for Memorial Day night also attend the Banquet.
The Program was a Ladies’ and Gentlemen’s Style Show which was unique and much enjoyed by all.
After the Program there was much visiting and reminiscing. 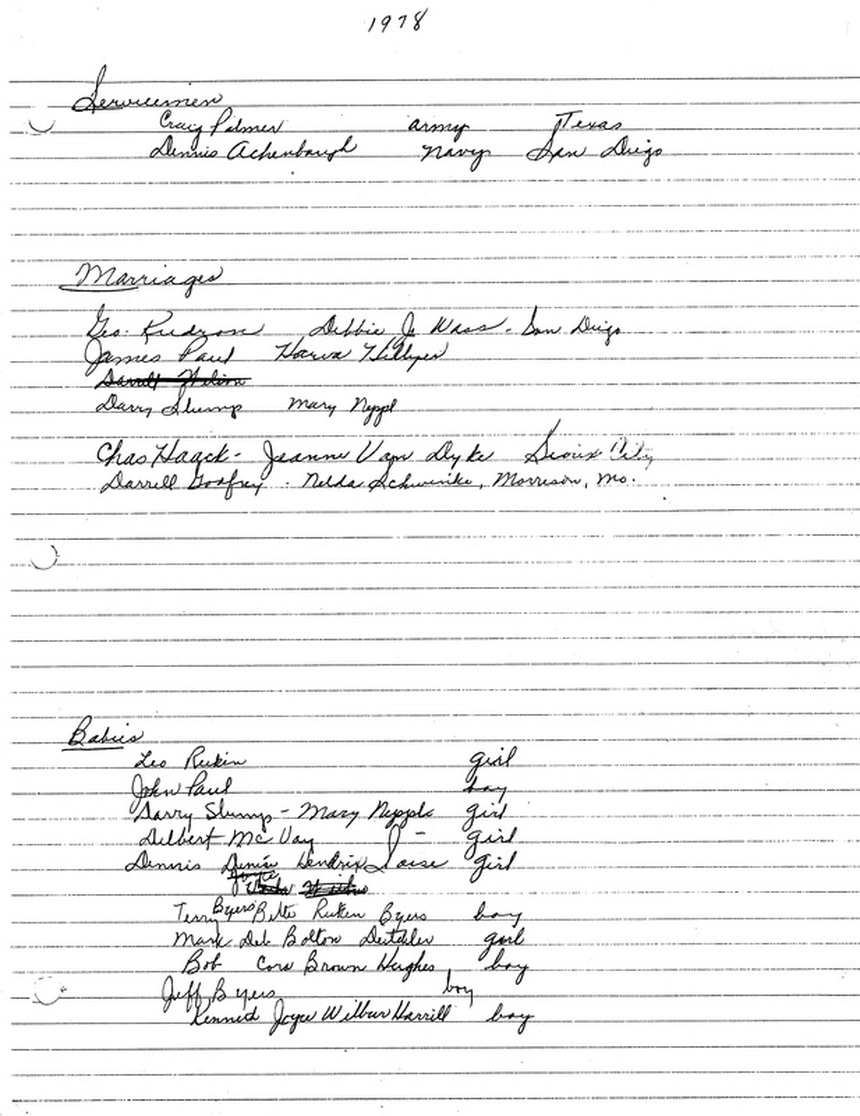 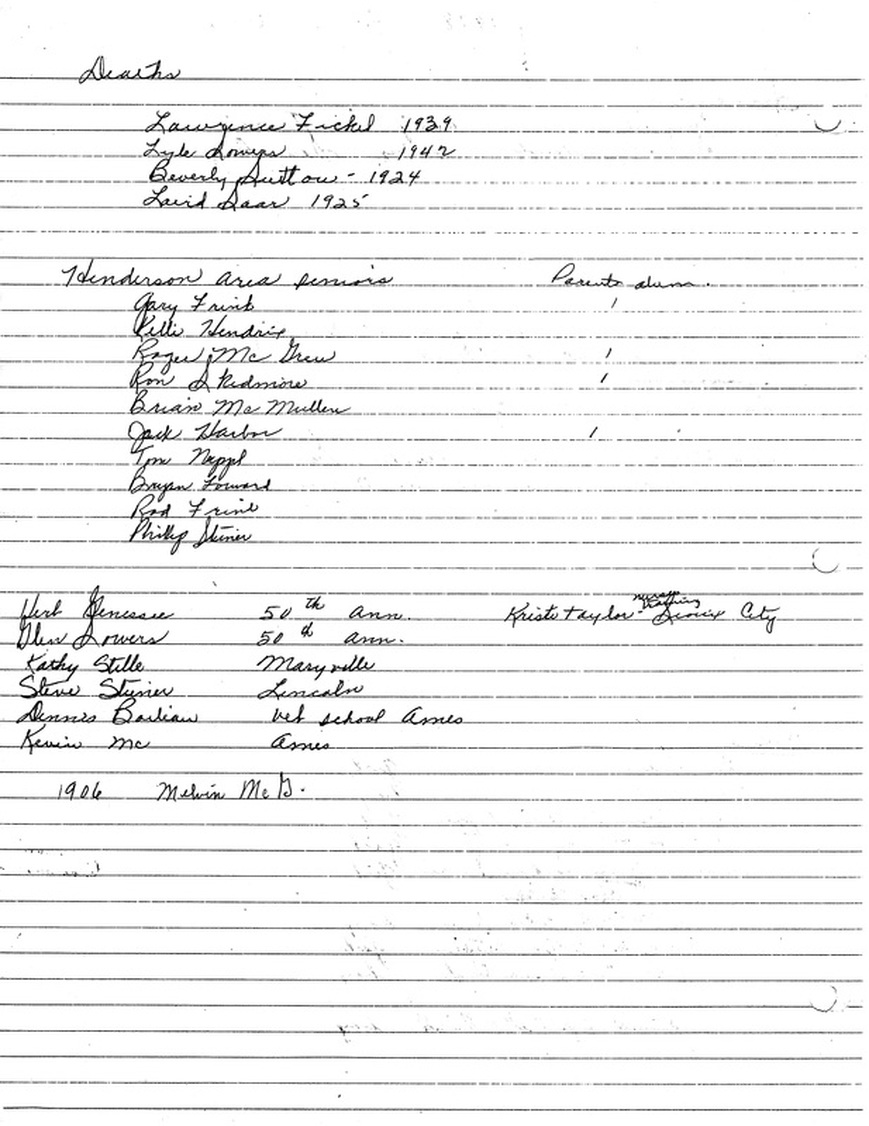 The Officers met at the home of Minnie Allensworth and the following Committees were appointed:

The 64th Annual Henderson Alumni Association Banquet was held at the Little League Gym on Saturday, May 26, 1979 with 98 Graduates and Guests present. The Roast Beef and Ham dinner was catered by Mickel's of Harlan.
The seating was by classes so there could be visiting while the meal was in progress. After the delicious meal was completed, President Minnie Allensworth called the meeting to order. Minutes of the 1978 meeting were read and approved. Velda Myers gave the Treasurer’s Report with a balance of $202.54. Glen Brown made a motion to accept the Treasurer’s Report. Bill Harbor seconded and it was so voted.
The Nominating Committee presented the following names for offices for the coming year:

They were all elected by voice vote.
Jim Holt made a motion to pay all bills. Alta Forristall seconded and it was so voted.
Ruby Godfrey gave the Historian’s Report.
As there was no further business, there meeting was turned over to Wanda Williams, Mistress of Ceremonies.
The Roll Call of Classes was held with each graduate introducing himself and guest and adding anything he might care to say.
The 50-year Class which was 1929 was honored. Four members of that Class were present. Those present were Grace Edmondson Fisher of Mt. Vernon, Washington; Sam Taylor of Red Oak, Iowa; Lenora Simmonds Jones of Omaha, Nebraska; and Elva Nyren of Henderson. Grace Fisher read an article written by Elva Nyren about the members of the Class and their families.
Special recognition was given to Ruby Godfrey for her 25 years as Historian of the Alumni. Ruby read her first Report given 25 years ago. This was much enjoyed by all.
Bill Harbor gave special tribute to Lloyd Patterson. Lloyd was a member of the Championship Basketball Team of 1930 and 1931, and was inducted into the Iowa Athletic Association Hall of Fame during the Boys State Basketball Tournament this past winter.
Guests were in attendance from Washington, Minnesota, Colorado, Omaha and many Iowa towns. 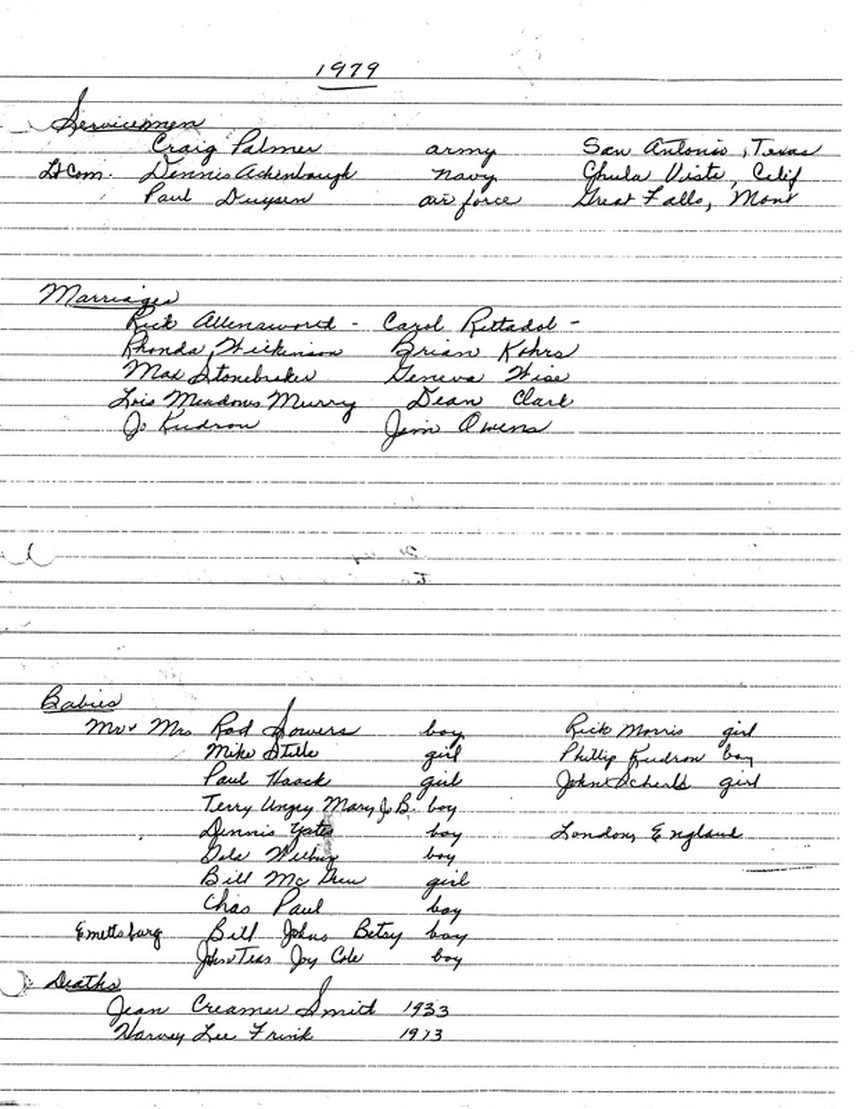 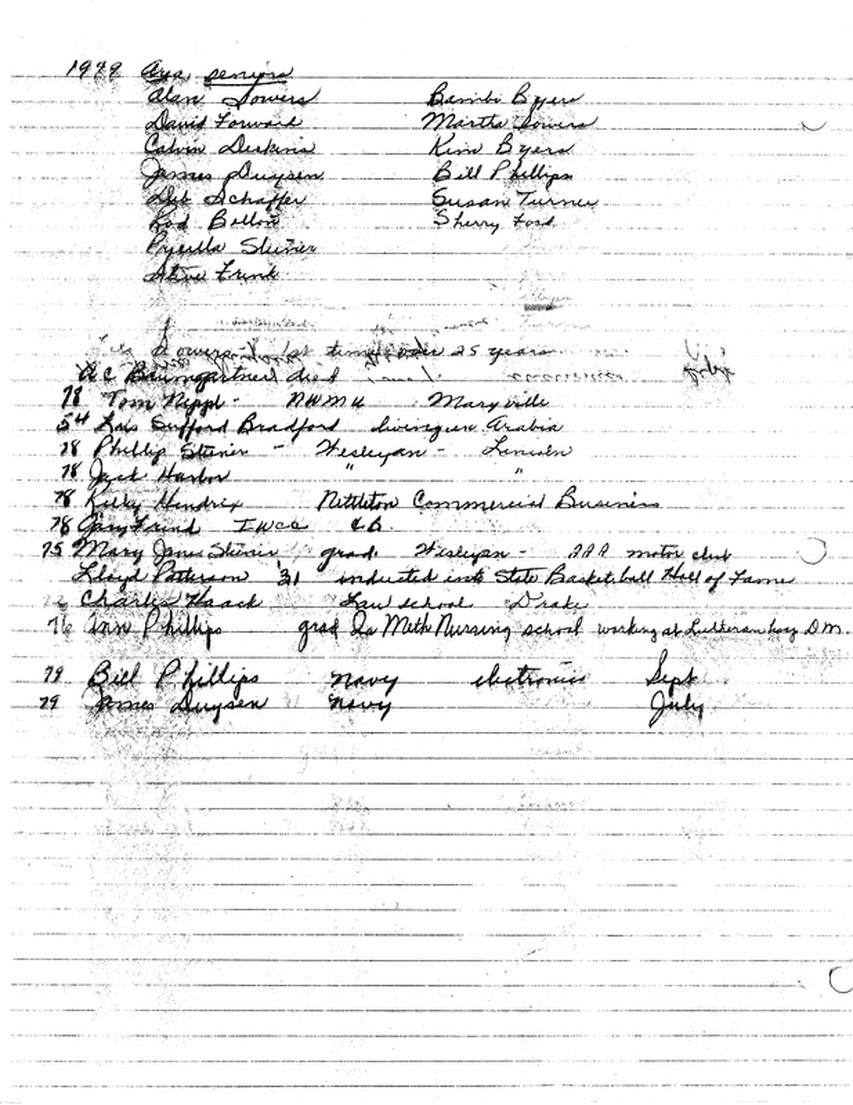 The 65th Annual Henderson Alumni Association Banquet was held at the Little League Gym Saturday, May 24, 1980 with 66 graduates and guests present. The roast beef dinner was catered by Mickel’s of Harlan.
After the delicious meal the Meeting was called to order by President Bob Roeder. Minutes of the 1979 meeting were read and approved. Velda Myers gave the Treasurer’s Report with a balance of $213.79. Glen Brown made a motion to accept the Treasurer’s Report. Les Sowers seconded and it was so voted.
The nominating committee presented the following names for offices for the coming year:

Judy Magers read a poem.
Guests were in attendance from Washington, California, Omaha and many other towns and places. 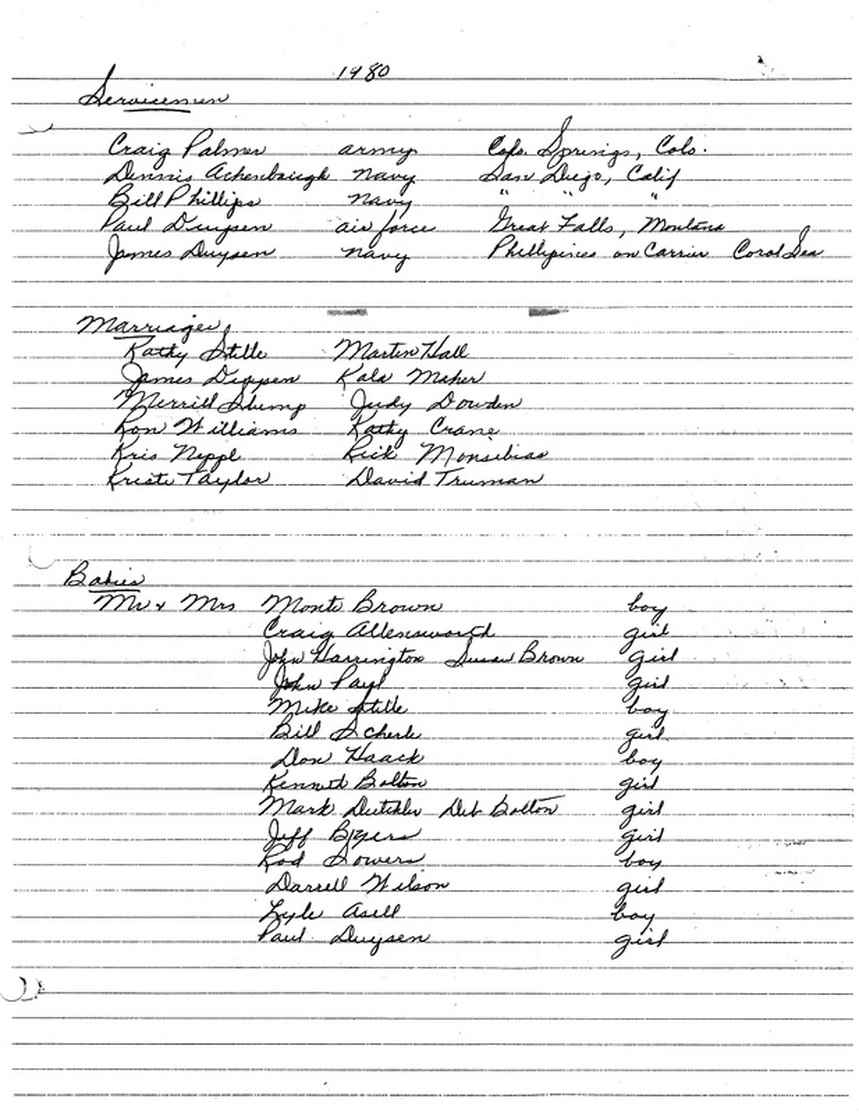 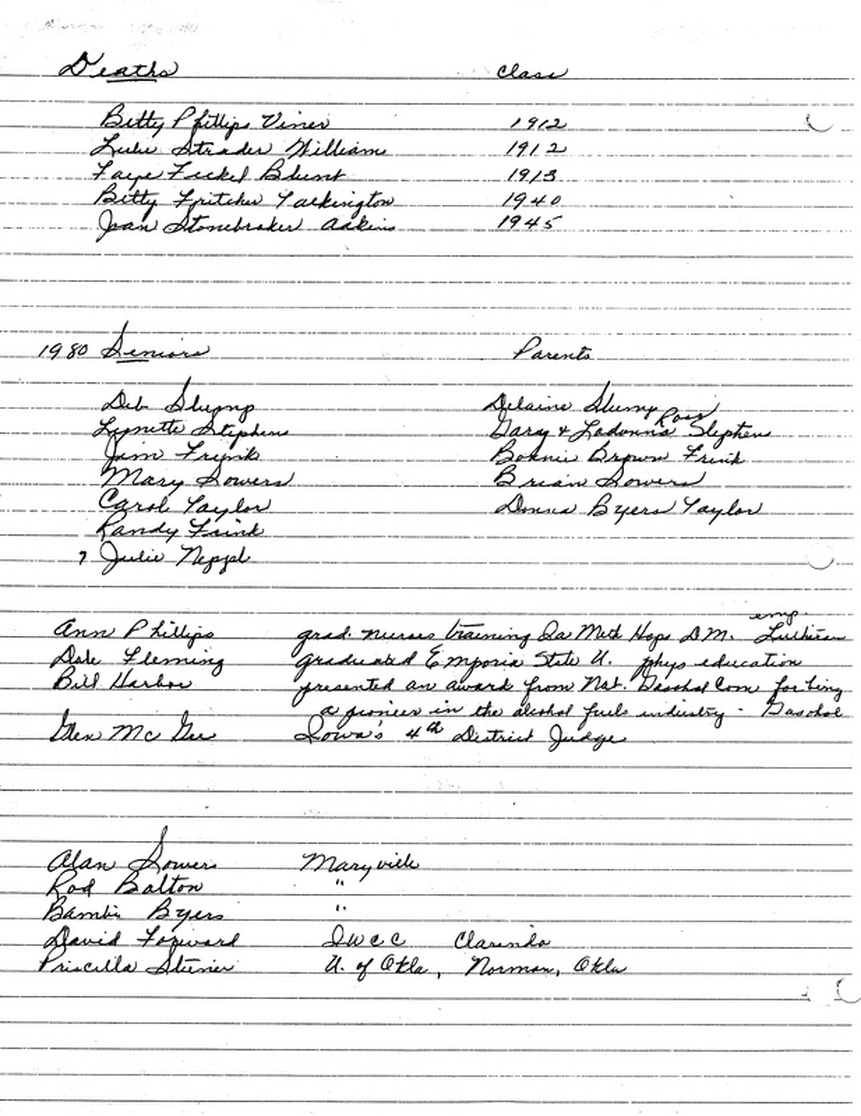