The 46th Annual Banquet of the Henderson Alumni Association was held May 26, 1961, at the school gymnasium. The dinner was served by the Christian CWF to 132 persons.
The business meeting was called to order by President Bryan Sowers. A discussion was held to determine if the Annual Banquets should continue to be held. A motion was made by Minnie Allensworth and seconded by Elizabeth Edmondson that we continue the Alumni Association and invite the seniors from the Henderson area until such time a Nishna Valley Alumni Association is formed. Motion carried.
A balance of $65.99 was reported in the treasury. Motion made and seconded all bills be allowed.
The nominating committee named the following officers for next year:

Betty Raney and Don Allensworth acted as Masters of Ceremonies. Bonnie Siefford welcomed the seniors, and Barbara Morris responded. The annual reading of the alumni news was done by Ruby Godfrey.
The program, the ‘30s, was based on entertainment arranged by several of the alumni who graduated in the thirties.
The Carson-Macedonia jazz band presented several musical numbers and played for the dance. 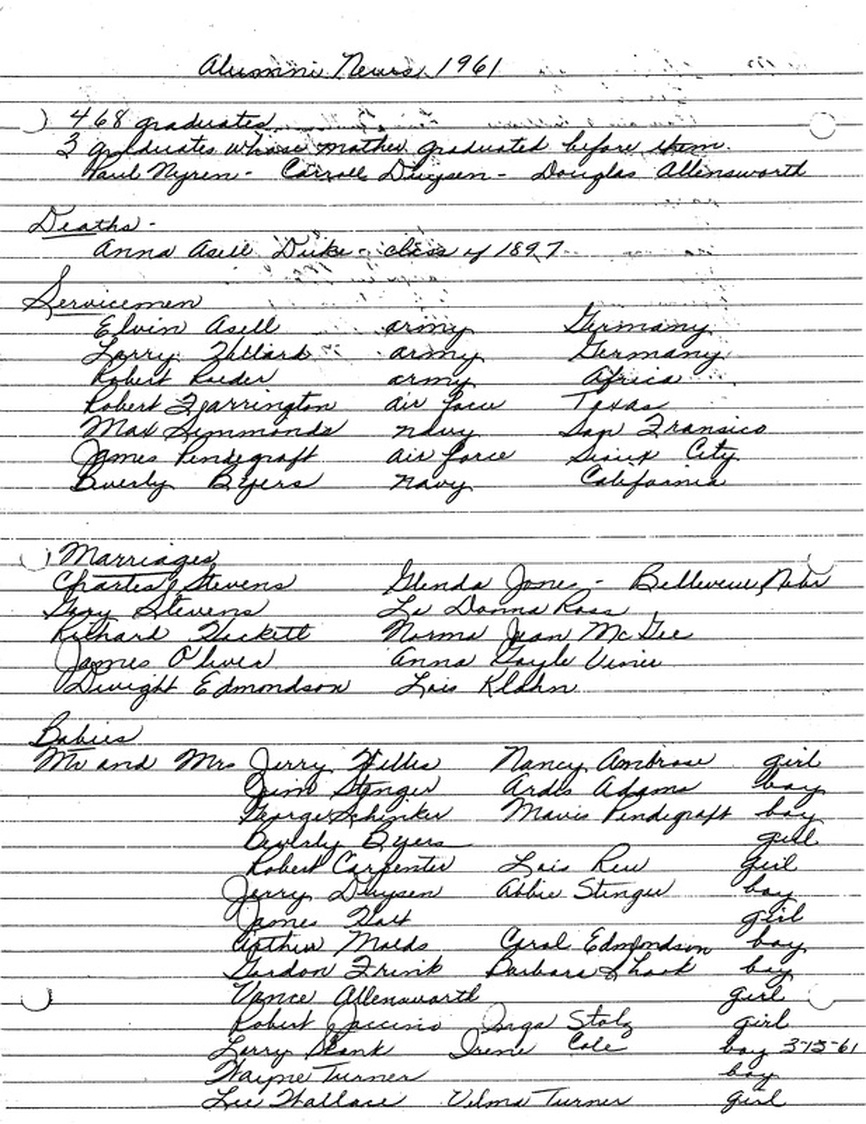 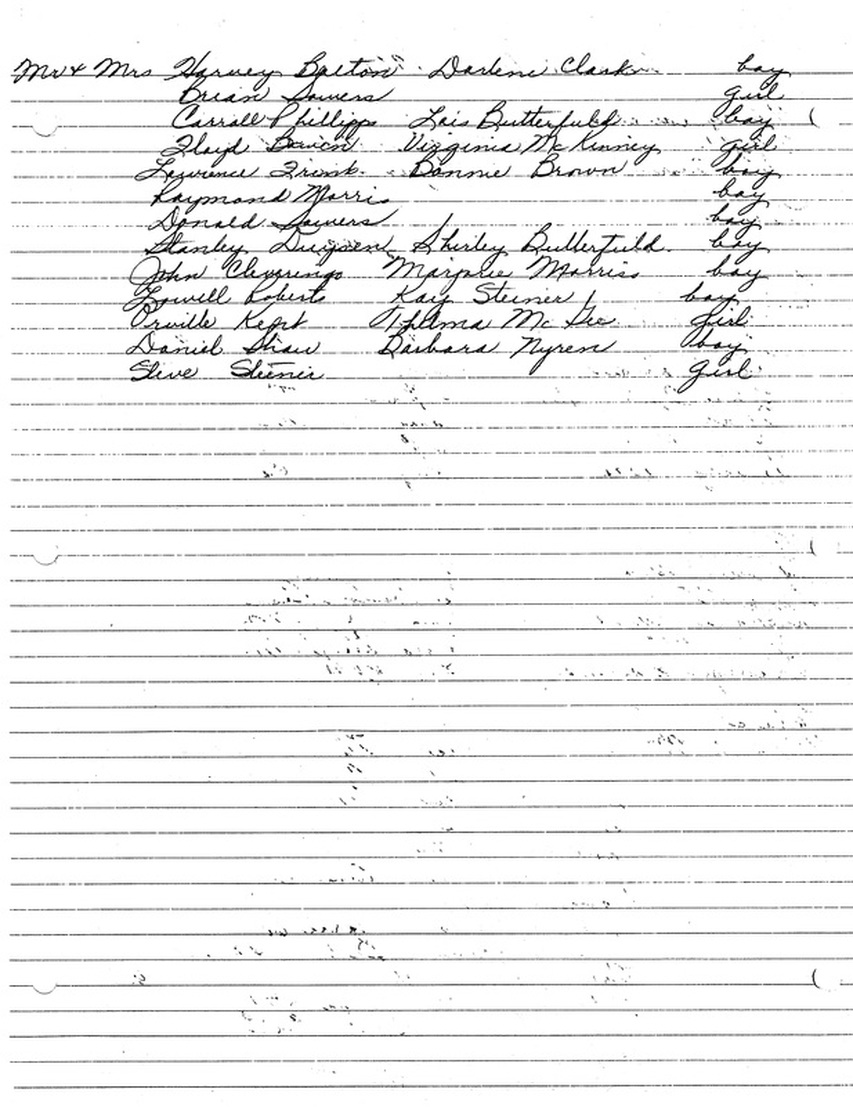 The 47th Annual Banquet of the Henderson Alumni Association was held June 2, 1962, at the school gymnasium. Dinner was served by the Methodist W.S.C.S. to 134 persons.
The business meeting was called to order by President Judy Magers. A balance of $50.71 was reported by the Treasurer Deloma Allensworth. Motion was made and seconded all bills be allowed.
The following were named by the nominating committee for the 1963 Banquet:

Jack Slump served as Master of Ceremonies. Group singing led by Steve Steiner and Jerry Duysen was enjoyed by all. Carol Fleming responded to the Welcome given the seniors by Bill Harbor. The annual alumni news was given by Mrs. Ruby Godfrey.
Music for dancing and floor show by “Larry’s Little Combs” of Carson concluded the evening. 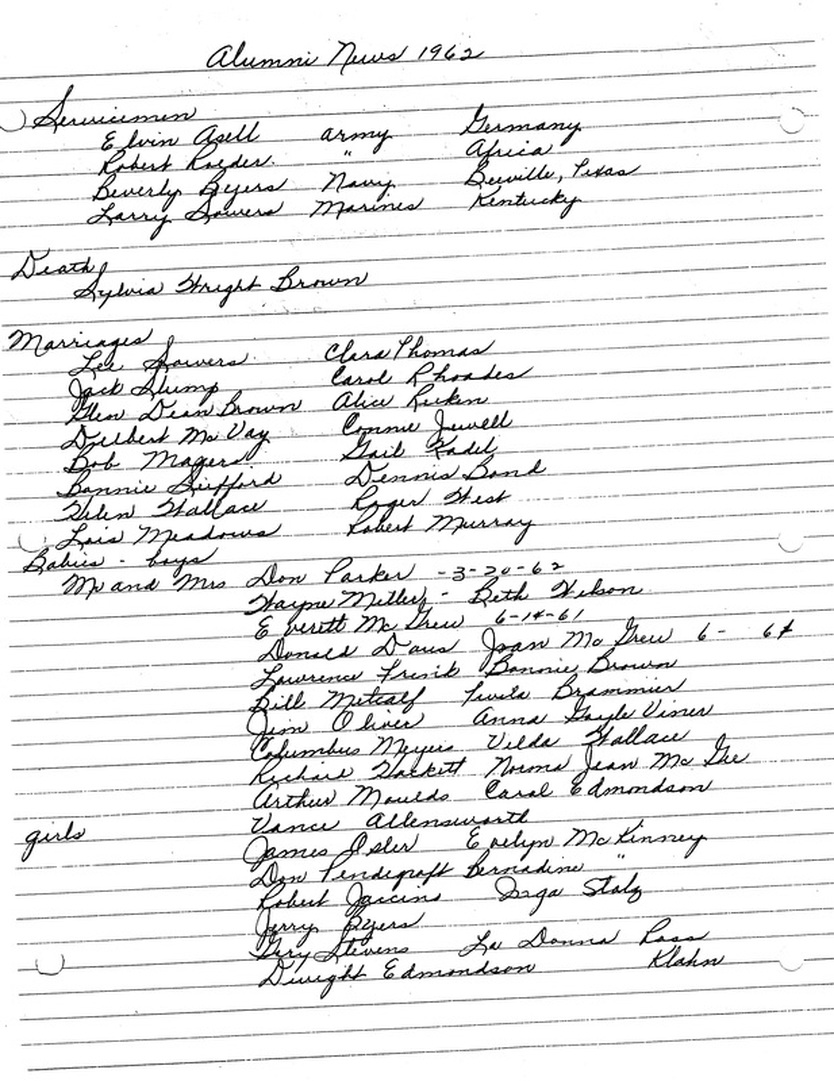 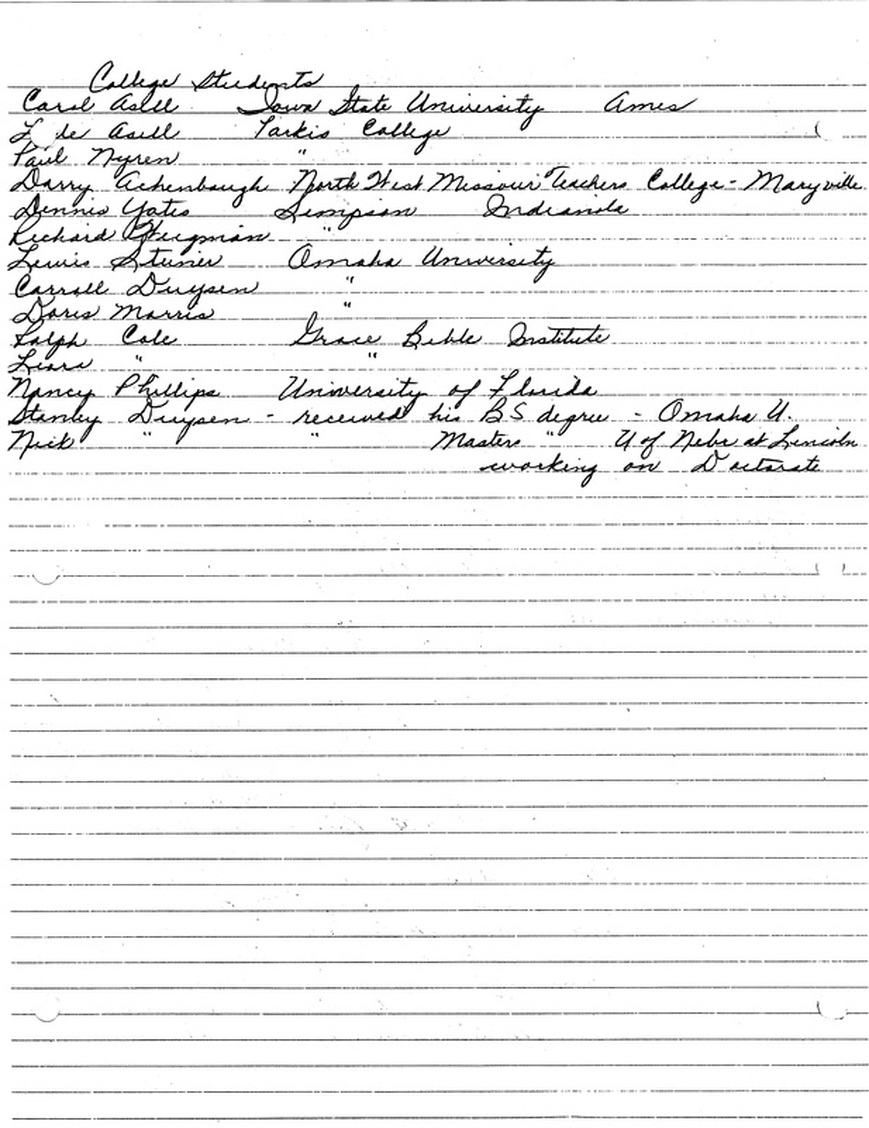 The 48th Annual Banquet of the Henderson Alumni Association was held in the Henderson High School gymnasium on May 24, 1963. The dinner was served by the Christian Church C.W.F. to 113 persons.
Invocation was given by Rev. Robert Jones. The business meeting was called to order by President Judy Magers. Deloma Allensworth read Treasurer's Report with a balance of $53.73. Secretary’s report read and approved. Motion was made and seconded all bills be paid.
The nominating committee presented the names of the following for the 1964 officers:

Steve Steiner acted as Toastmaster. Welcome was given by Betty Viner and Susan Steiner gave the response. The annual reading of the alumni news was given by Ruby Godfrey.
Community Sing was led by Jerry Duysen with Barbara Hendrix at the piano.
Music for dancing by the Krisingers Band. 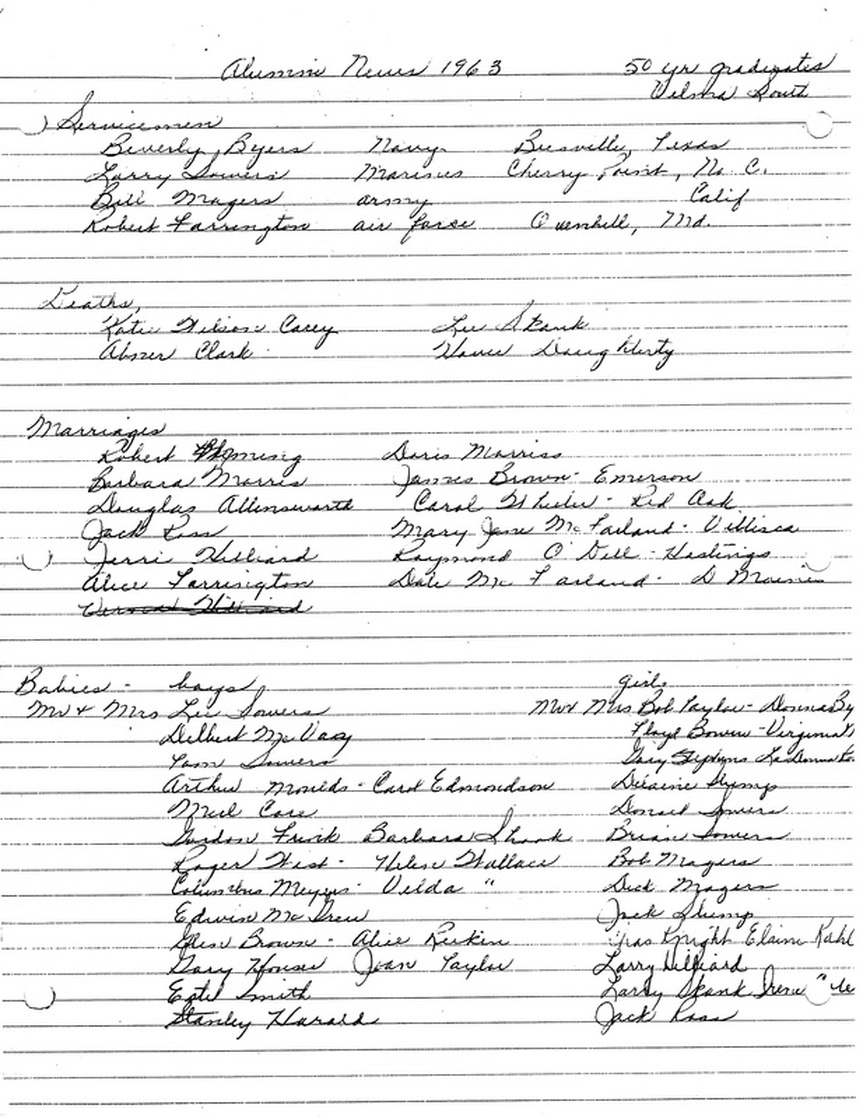 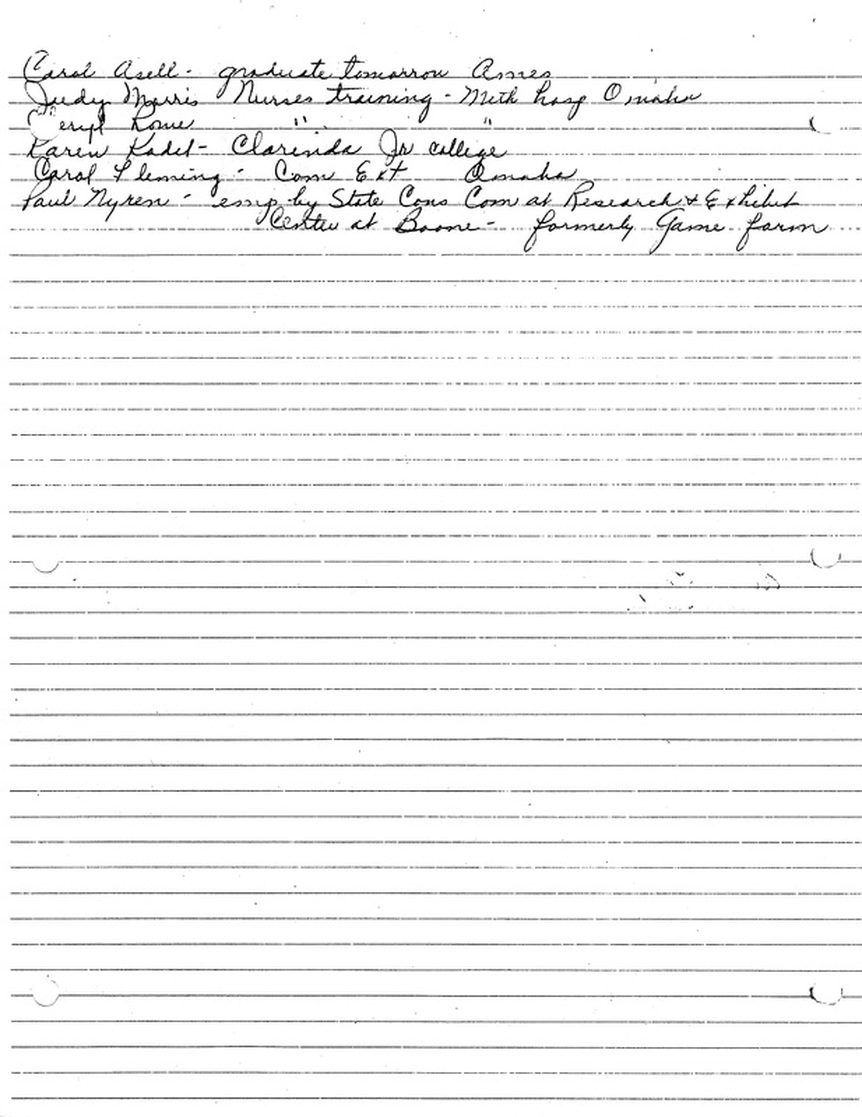 The 49th Annual Banquet of the Henderson High School Alumni Association was held May 23, 1964 at 8:00 p.m. at the Henderson gymnasium. 100 people attended the dinner served by the Christian Church C.W.F.
Rev. Rowe gave the invocation. President Steve Steiner also acted as the Master of Ceremonies. Four of the seven seniors welcomed into the association by the President attended.
The minutes were read and approved. The Treasurer’s Report was read, showing a balance of $.37. A discussion was held as to whether the Alumni Banquet would continue. It was decided to have at least one more and to reach a final decision then.
The following officers were named by the nominating committee for 1965:

The 50th Annual Banquet of the Henderson High School Alumni Association was held May 29, 1965 at 8:30 p.m. at the Henderson School Gymnasium. The dinner served by the Methodist W.S.C.S. was attended by 112 members.
The invocation was given by Rev. Robert Jones, and Dallas McGrew acted as Master of Ceremonies in keeping with the promise of 50 years ago when he did the same. President Minnie Allensworth presided at business meeting. The alumni will continue annually, as is, as long as possible. It was decided to put all class photographs in an album and place in school library for future use and to prevent them being destroyed. Douglas Allensworth welcomed ten seniors into the Association. Susan Brown, the only one atte3nding, gave the response. A greeting, congratulating us on our Golden Anniversary, was received from former Superintendent A. C. Baumgartner. Decorations were in black and gold, keeping with the theme.
The following officers were named for 1966:

After the meal and business everyone joined in singing. The program some entertained by showing all class pictures of graduates from H.H.S. followed by dancing.