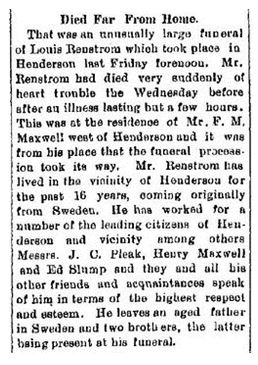 A Mixed Up Affair.
W. W. Creamer of Henderson has been having all sorts of trouble as administrator of the Lewis A. Renstrom estate in trying to find the proper heirs to which to pay the money in his charge some $1200. Renstrom who was a bachelor died in August, 1898. He had two brothers living in Illinois and some sisters and nephews and nieces living in Nebraska, while his father lived at Kritsdella, Sweden. It seems, when the family came to America the children changed their name and this tangled up matters. Then after hunting up the father, whose name was Andrew Carlson, and while Mr. Creamer was in correspondence with him the former died. This tangled up matters still worse. The law of Iowa says the "next of kin" when an unmarried person dies is the parents to whom the money should be paid. After the father's death the administrator was unable to get the authorities in Sweden to appoint a proper person over there to receive the money so Judge Smith was asked to help him out. With his bland, good-natured smile and a pen and ink his honor soon untangled the troublesome knot for Mr. Creamer, by issuing an order that after $50 was expended for a monument in the Henderson cemetery the balance should be sent to Sweden to the administrator of the father's estate, who after following up several rods of red tape will then send the money, if by that time there is any left, back to America, where in course of a few years it may reach the pockets of the deceased Mills county man's brothers and the law, sisters.