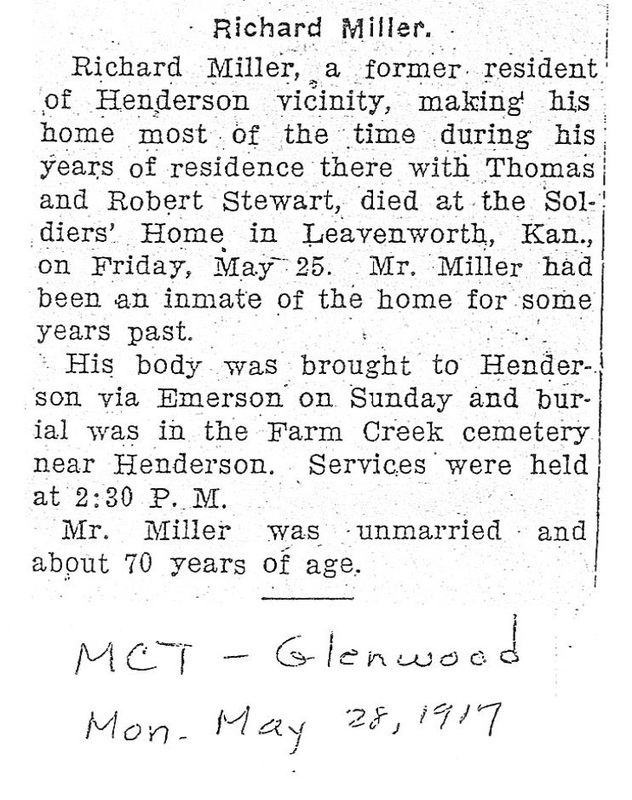 Richard Miller, a former resident of Henderson vicinity, making his home most of the time during his years of residence there with Thomas and Robert Stewart, died at the Soldiers’ Home in Leavenworth, Kan., on Friday, May 25. Mr. Miller had been an inmate of the home for some years past.

His body was brought to Henderson via Emerson on Sunday and burial was in the Farm Creek cemetery near Henderson. Services were held at 2:30 P. M.

Mr. Miller was unmarried and about 70 years of age.

Brother Miller was an honored veteran of the Civil War, having served his country in Company B of the 9th Illinois Cavalry for three years and five months. He participated in the siege of Vicksburg, where he was wounded in battle.

Mr. Miller leaves, so far as known, no near relatives, but in his sojourn in and around Henderson he had won for himself a large circle of friends who revere his memory and shall miss him greatly. For 30 years he resided in or near Henderson.

Brother Miller was kind and generous and genial, a valiant soldier, a loyal citizen, honest and trustworthy, a man who loved his fellow men and his country with more than ordinary fealty.

As a soldier. . .(missing). . .-zen of peace he fought the battles of justice, mercy, love and liberty and now he has struck tent, stacked arms and joined the great Bivouac of the Nation’s Honored Dead. Sweet be the sleep of this soldier under the kindly skies under which so many times in battle he laid down to rest. Sleep! Sacred dust of noble dead, as earth now pillows thy honored head, and may thy name be ever cherished by a grateful people whom thou didst offer thyself to redeem them from a disunited and disheartening national life.

The funeral services were held at the M. E. church at Henderson, Ia., Sunday, May 27, 1917, at 2 P. M., the pastor of the church officiating. Interment was made in the Henderson cemetery. Here kindly hearts and hands laid to rest, as was the request, the mortal remains of another of the worthy members of the Grand Army of the Republic.