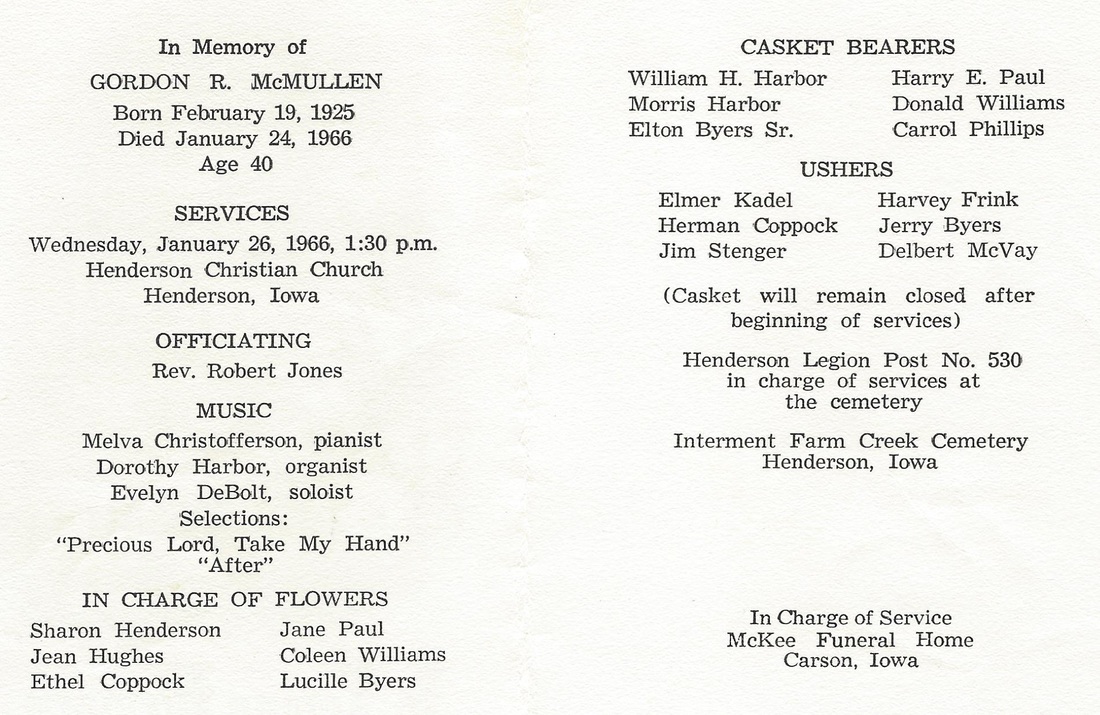 The following life sketch was read: Gordon Robert McMullen was born Feb. 19, 1925 in Wales-Lincoln Township near Henderson, the son of William and Elsie McMullen. He passed away Jan. 21 in the Veterans hospital in Omaha at the age of 40 years, 11 months.

He was married to Betty Brown March 22, 1946 at Hiawatha, Kan. To their marriage were born six children: Mrs. Claudia Longcor of Oakland, Beverly Virginia, Julie, Brian and Robert of Henderson.

He is survived by his wife and family, his father, Bill McMullen; sister, Mrs. Leona Woods of Henderson; two brothers, Dale of Henderson, and Don of Onamia, Minn., and one grandson, Michael.

His mother preceded him in death in 1930

Gordon was a World War II Veteran, serving in the Pacific Theater. He was a member of the Henderson American Legion Post.

Other than the years spent in the service, he lived in the Henderson community all of his life. He has many friends and leaves a host of folk to mourn his passing.

Interment was in the Farm Creek Cemetery at Henderson. McKee Funeral Home of Carson in charge.

Lunch was served by friends in the Christian Church following the service.

We wish to express our sincere thanks to all the wonderful friends, whose kind words and thoughtful acts have comforted us throughout the illness and death of our loved one. May God bless each and every one.