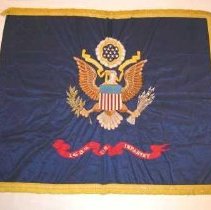 168TH IOWA INFANTRY COLORS
U.S. regimental flag of the 168th Iowa. World War I. Governmental Issue. 1 layer. Machine sewn. Field is composed of dark blue, silk panel. At center is an embroidered design of a brown Federal eagle with a cache of arrows in one talon and an olive branch in the other. A yellow Federal motto "E PLURBIS UNUM" ribbon is in eagle's beak. Above, located in a white cloud shape, is a dark blue circle outlined in rays of yellow sunshine and contains 13 5-pointed, white embroidered stars. Below the eagle is a red embroidered, swallowtail unit ID ribbon with "168TH/U.S./INFANTRY" embroidered in white. Top, bottom and fly edges of the field are selvedge edges. Top, bottom and fly end.

Interment was in the Farm Creek cemetery at Henderson.

The following life sketch was read:

James Edwin Linthicum, the only son of Jennie Brown Linthicum and David Linthicum, was born in the Wales community on Dec. 23, 1893 and passed away at the Veterans hospital in Omaha at the age of 73 years, one month and 12 days, having been in poor health for many years.

He spent most of his life in Mills county. He was a veteran of the first World War, was wounded in France.

He came to Hastings in 1929 and lived with his mother until her death in 1955, after which he lived alone. He had one sister Flossie, who preceded him in death as did his mother and father.