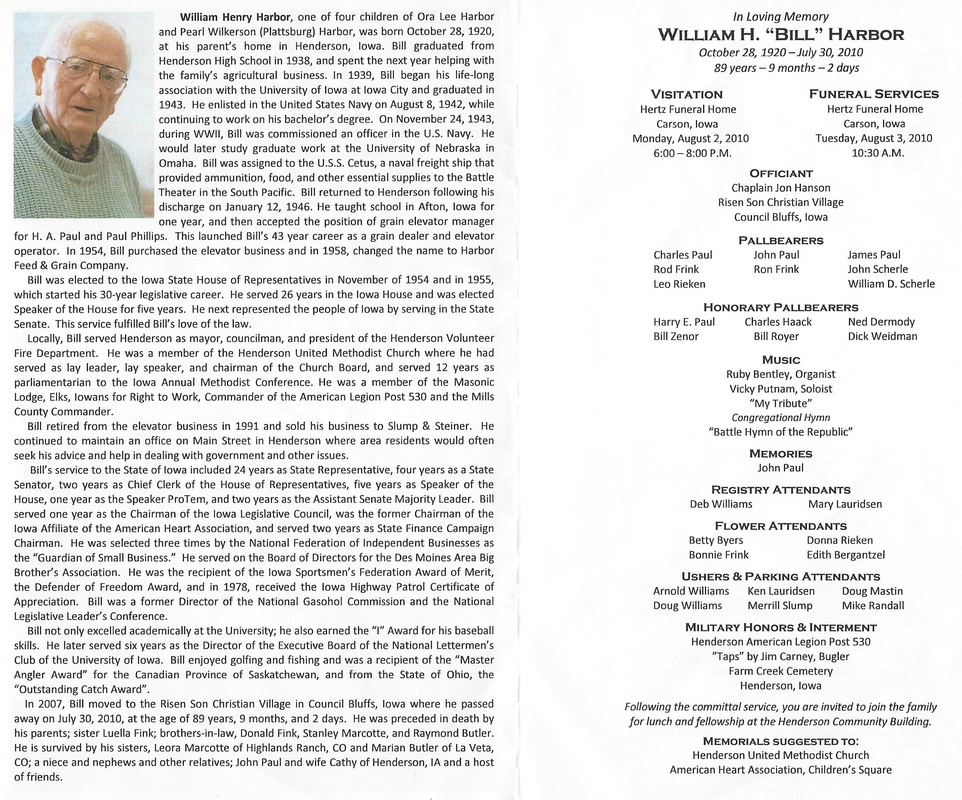 William H. “Bill” Harbor, one of four children of Ora Lee Harbor and Pearl Wilkerson (Plattsburg) Harbor, was born Oct. 28, 1920, at his parent’s home in Henderson, Iowa. Bill graduated from Henderson High School in 1938, and spent the next year helping with the family’s agricultural business. In 1939, Bill began his life-long association with the University of Iowa at Iowa City and graduated in 1943. He enlisted in the United States Navy on Aug. 8, 1942, while continuing to work on his bachelor’s degree. On Nov. 24, 1943, during WW II, Bill was commissioned an officer in the u. S. Navy. He would later study graduate work at the University of Nebraska in Omaha. Bill was assigned to the U.S.S. Cetus, a naval freight ship that provided ammunition, food, and other essential supplies to the Battle Theater in the South Pacific. Bill returned to Henderson following his Jan. 1`2, 1946 discharge. He taught school in Afton, Iowa for one year, and then accepted the position of grain elevator manager for H. A. Paul and Paul Phillips. This launched Bill’s 43-year career as a grain dealer and elevator operator. In 1954, Bill purchased the elevator business and in 1958, changed the name to Harbor Feed & Grain Company.
Bill was elected to the Iowa State House of Representatives in November of 1954 and in 1955, which started his 30-year legislative career. He served 26 years in the Iowa House and was elected Speaker of the House for five years. He next represented the people of Iowa by serving in the State Senate. This service fulfilled Bill’s love of the law.
Locally, Bill had served as former mayor, councilman, and president of the Henderson Volunteer Fire Department. He was a member of the Henderson United Methodist Church where he had served as lay leader, lay speaker, and chairman of the Church Board and served 12 years as parliamentarian to the Iowa Annual Methodist Conference. He was a member of the Masonic Lodge, Elks, Iowans for Right to Work, Commander of the American Legion Post 530 and the Mills County Commander.
Bill retired from the elevator business in 1991 and sold his business to Slump & Steiner. He continued to maintain an office on Main Street in Henderson where area residents would often seek his advice and help in dealing with government and other issues.
Bill’s service to the State of Iowa included 24 years as State Representative, four years as a State Senator, two years as Chief Clerk of the House of Representatives, five years as Speaker of the House, one year as the Speaker Pro Tem, and two years as the Assistant Senate Majority Leader. Bill served one year as the Chairman of the Iowa Legislative Council, was the former Chairman of the Iowa Affiliate of the American Heart Association, and served two years as State Finance Campaign Chairman. He was selected three times by the National Federation of Independent Businesses as the “Guardian of Small Business.” He served on the Board of Directors for the Des Moines Area Big Brother’s Association. He was the recipient of the Iowa Sportsmen’s Federation Award of Merit, the Defender of Freedom Award, and in 1978, received the Iowa Highway Patrol Certificate of Appreciation. Bill was a former Director of the National Gasohol Commission and the National Legislative Leader’s Conference.
Bill not only excelled academically at the University, he also earned the “I” Award for his baseball skills. He later served six years as the Director of the Executive Board of the National Lettermen’s Club of the University of Iowa. Bill enjoyed golfing and fishing and was a recipient of the “Master Angler Award” for the Canadian Province of Saskatchewan, and from the State of Ohio, the “Outstanding Catch Award.”
In 2007, Bill moved to the Risen Son Christian Village in Council Bluffs, Iowa where he passed away on July 30, 2010, at the age of 89 years, 9 months, and 2 days. He was preceded in death by his parents; sister Luella Fink; brothers-in-law, Donald Fink, Stanley Marcotte, and Raymond Butler. He is survived by his sisters, Leora Marcotte of Highlands Ranch, Colo., and Marian Butler of La Veta, Colo.; niece and nephews and other relatives; John Paul and wife Cathy of Henderson, Iowa, and a host of friends.

Carol R Van Nostrand
Aug 3, 2010
Bill was a most honorable person and admired by those who were lucky to have known him.; I know Maurie considered him a good friend. The world is a better place for Bill's presence and in every way he chose to serve during his lifetime.

Kevin Van Nostrand
Aug 2, 2010
I was Bill's Page in 1969 when my dad also served in the House. It was a geat honor to have worked beside him and I learned a great deal about Iowa government from him. I know he and Dad were close friends during that term and long after.

Beth Webb
Aug 2, 2010
My deepest sympathies to Bill's family and friends. He clearly had an impact on all of those he came into contact with.

Margaret Johnson
Jul 31, 2010
I was your Page in 1971 in the House. I know you were often perplexed about how to deal with a 17 year old away from home the first time. It was a wonderful experience and you did a great job! I turned out okay.

Barbara Cunningham
Jul 30, 2010
What a public servant Bill was! We thank the family for sharing him with southwest Iowa. Our sympathy is with you all.