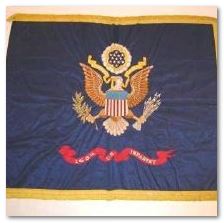 U.S. regimental flag of the 168th Iowa. World War I. Governmental Issue. 1 layer. Machine sewn. Field is composed of dark blue, silk panel. At center is an embroidered design of a brown Federal eagle with a cache of arrows in one talon and an olive branch in the other. A yellow Federal motto "E PLURBIS UNUM" ribbon is in eagle's beak. Above, located in a white cloud shape, is a dark blue circle outlined in rays of yellow sunshine and contains 13 5-pointed, white embroidered stars. Below the eagle is a red embroidered, swallowtail unit ID ribbon with "168TH/U.S./INFANTRY" embroidered in white. Top, bottom and fly edges of the field are selvedge edges. Top, bottom and fly end
Alphabetical Listing
Conflict
Find A Grave
Iowa Gravestone
Service Branch
Company M, 168th Iowa at St. Mihiel 1918
Gen. MacArthur and the 168th

Bennett, Colonel Ernest R.
Commander of the ﻿168th (Iowa) Infantry Regiment﻿ from mobilization until the heights of the Ourcq River. He was relieved on July 29, 1918 during the fighting there and replaced by Lieutenant Colonel Mathew W. Tinley.


Donovan, Lieutenant Colonel William H. “Wild Bill”
A battalion commander of the 165th (New York) Infantry Regiment of the “Rainbow”, he was on the point of the regiment’s unsuccessful attack on the Kriemhilde Stellung on the eastern flank of the 167th (Alabama). That regiment and the 168th (Iowa) attacked the Cote de Chatillon at the strongest point of the four German lines of defense making the Hindenburg Line. After two days of fighting, Donovan was wounded before falling back on October 15, 1918, gaining him a nomination for the Congressional Medal of Honor. Donovan went on to become the World War II commander of the Office of Strategic Services and founder of the Central Intelligence Agency.


Fallaw, Captain Thomas H.
Became I Company commander, organized, directed and carried through to successful conclusion all of the 167th (Alabama) front line activities at the Cote de Chatillon on October 16, 1918. With a provisional group of about 120 men, all that were left from the 3rd Battalion, he moved under cover of darkness to the west of the hill, reaching the attack position at 6:10 a.m. At about 10:00 a.m. the 151st (Georgia) Machine Gun Battalion fired for 30 minutes into the fortified German position, then lifted fire for 15 minutes to cover the German held crest and reverse slope. Fallaw and his men jumped off to the north and east from their position on the west side of the Côte. After the wild attack of his force, there were two German counterattacks. Elements of the 168th (Iowa) then converged on the hill at the same time as the Alabama forces and the position was taken by 4:00 p.m. with equal honors for all. Captain Fallaw was awarded a Distinguished Service Cross.  He had served as a sergeant on the Mexican Border and was commissioned before going to France.


Winn, Major Cooper D., Jr.(see website)
Commanded the 151st (Georgia) Machine Gun Battalion at the Côte de Châtillon, reporting directly to the 84th Brigade, commanded by Brigadier General Douglas MacArthur. Winn personally assigned targets to 65 machine guns placed on the forward slope of Hill 263 prior to the October 16, 1918 attack by the 167th (Alabama) on the Côte. At about 10:00 a.m. his guns commenced indirect and enfilade (down into) firing for 30 minutes into the fortified German position, then lifted fire for 15 minutes to cover the crest and reverse slope. When the moving fire lifted, the assault force of about 120 men from the 3rd Battalion of the 167th (Alabama) Infantry Regiment jumped off and attacked to the north and east.from the west side of the Côte. Due to the supporting machine gun fire, the attacking infantry had less resistance and fewer casualties than anticipated. There were two German counterattacks. Elements of the 168th (Iowa) converged on the hill at the same time as the Alabama forces and the position was taken by 4:00 p.m. with equal honors for the two regiments. Brigadier General MacArthur cited Winn for honors and recommended him for the Distinguished Service Cross, a combat award. It was not approved, but Winn received a Distinguished Service Medal and promotion to Lieutenant Colonel.

Red Oak, Iowa will be hosting a visit from two gentlemen from France, Lionel Humbert and Philippe Esvalin. Philippe has recently written a book on pilots who flew gliders in World War Two called “Forgotten Wings”. Lionel is a avid historian especially on World War One and has a lifelong dream of coming to Iowa. Lionel lives in a small town called Neufmaison and that happens to be where the 168th Iowa Infantry first fought in World War One. Lionel and Philippe are coming to honor the American sacrifice of both World Wars and to say thank you to the American people for helping keep their country free. They are particularly interested in Iowa.

They will touring Red Oak and the area on Thursday, getting to know the community where all the Americans came from almost one hundred years ago.