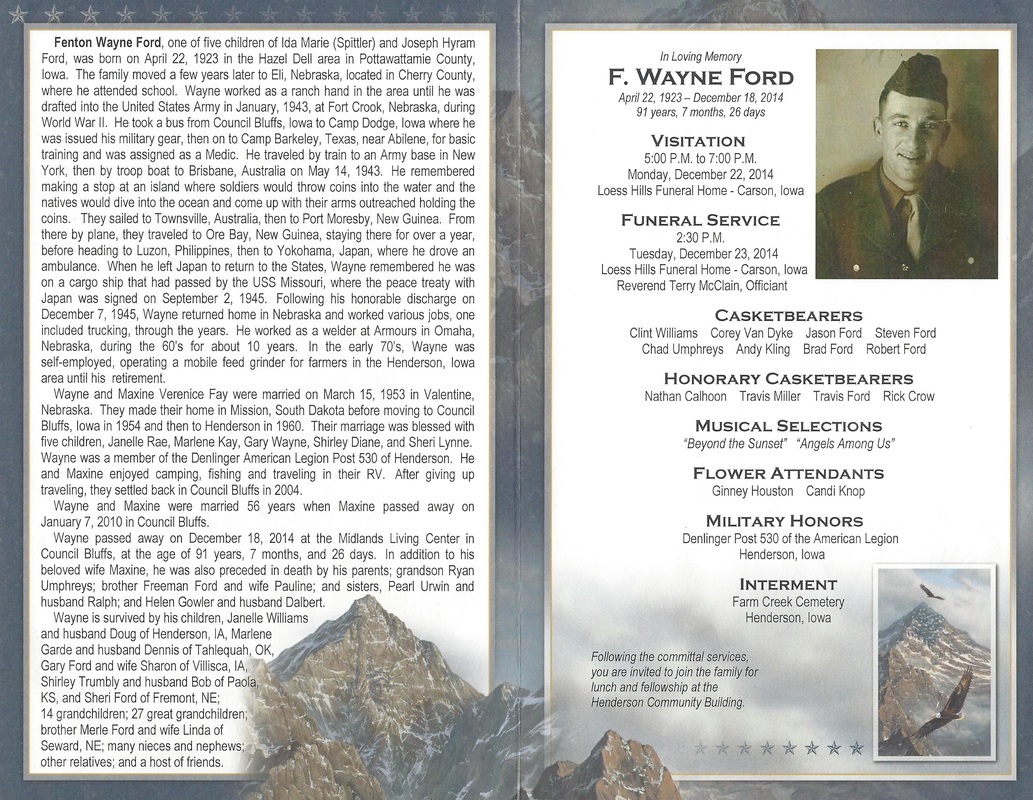 Loess Hills Funeral Home
Carson, Iowa
Wayne Ford, 91, of Council Bluffs, passed away on December 18, 2014 at the Midlands Living Center in Council Bluffs. Funeral service will be held at 2:30 p.m. on Tuesday, December 23, 2014 at the Loess Hills Funeral Home in Carson with military honors and burial in the Farm Creek Cemetery, Henderson. Visitation will be on Monday, December 22, 2014 from 5:00 p.m. to 7:00 p.m. at the funeral home.
In lieu of flowers, a memorial fund has been established.
Fenton Wayne Ford, one of five children of Ida Marie (Spittler) and Joseph Hyram Ford, was born on April 22, 1923 in the Hazel Dell area in Pottawattamie County, Iowa. The family moved a few years later to Eli, Nebraska, located in Cherry County, where he attended school. Wayne worked as a ranch hand in the area until he was drafted into the United States Army in January, 1943, at Fort Crook, Nebraska, during World War II. He went to Camp Barkeley, Texas, near Abilene, for basic training and was assigned as a Medic. He traveled by train to an Army base in New York, then by troop boat to Brisbane, Australia on May 14, 1943. They sailed to Townsville, Australia, then to Port Moresby, New Guinea. From there by plane, they traveled to Ore Bay, New Guinea, staying there for over a year, before heading to Luzon, Philippines, then to Yokohama, Japan, where he drove an ambulance. When he left Japan to return to the States, Wayne remembered he was on a cargo ship that had passed by the USS Missouri, where the peace treaty with Japan was signed on September 2, 1945. Following his honorable discharge on December 7, 1945, Wayne returned home in Nebraska and worked various jobs, one included trucking, through the years. He worked as a welder at Armours in Omaha, Nebraska, during the ‘60s for about 10 years. In the early ‘70s, Wayne was self-employed, operating a mobile feed grinder for farmers in the Henderson, Iowa area until his retirement.
Wayne and Maxine Verenice Fay were married on March 15, 1953 in Valentine, Nebraska. They made their home in Mission, South Dakota before moving to Council Bluffs, Iowa in 1954 and then to Henderson in 1960. Their marriage was blessed with five children, Janelle Rae, Marlene Kay, Gary Wayne, Shirley Diane, and Sheri Lynne.
Wayne was a member of the Denlinger American Legion Post 530 of Henderson. He and Maxine enjoyed camping, fishing and traveling in their RV. After giving up traveling, they settled back in Council Bluffs in 2004.
Wayne and Maxine were married 56 years when Maxine passed away on January 7, 2010 in Council Bluffs.
Wayne passed away on December 18, 2014 at the Midlands Living Center in Council Bluffs, at the age of 91 years, 7 months, and 26 days. In addition to his beloved wife Maxine, he was also preceded in death by his parents; grandson Ryan Umphreys; brother Freeman Ford and wife Pauline; and sisters, Pearl Urwin and husband Ralph; and Helen Gowler and husband Dalbert.
Wayne is survived by his children, Janelle Williams and husband Doug of Henderson, IA, Marlene Garde and husband Dennis of Tahlequah, OK, Gary Ford and wife Sharon of Villisca, IA, Shirley Trumbly and husband Bob of Paola, KS, and Sheri Ford of Fremont, NE; 14 grandchildren; 27 great grandchildren; brother Merle Ford and wife Linda of Seward, NE; many nieces and nephews; other relatives; and a host of friends.

Loess Hills Funeral Home
Carson, Iowa
Elaine wrote on Dec 29, 2014:
“My sincere condolences on the loss of your dear father. He lived a full life and left many fond memories behind to be treasured. I hope that God’s promise of a resurrection (John 5:28,29) along with your cherished memories of Wayne, will bring you comfort during this difficult time. I, with you, look forward to the fulfillment of God’s original purpose for the earth when we can live forever on a peaceful earth along with our loved one. – Psalms 37:9-11. Even death will be no more!-Revelation 21:3,4. May these promises be of comfort to you as you gain the strength and inner peace to cope with the days ahead.”

Donna wrote on Dec 23, 2014:
“Prayers to the family. RIP to our dear cousin. Donna Harding for the Madsen cousins.”

Toni Casson wrote on Dec 23, 2014:
“Sorry for you loss. Thoughts and prayers are with you all… Toni Casson and Erv Moore”

Elaine and Brett Barns wrote on Dec 22, 2014:
“So sorry to hear of your dad’s passing. Our thoughts and prayers aer with you.”

Donna wrote on Dec 21, 2014:
“Fond memories of Wayne. He will be truly missed by all that knew him. Prayers to the family”