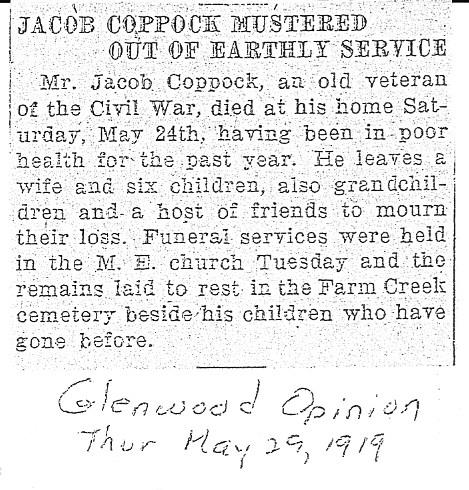 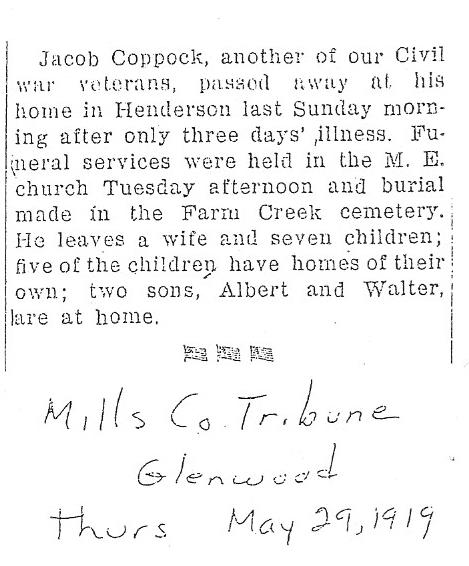 Malvern Leader
June 5, 1919
Page 6
Henderson Happenings
Items of Interest From Our Correspondent at the Little City on the Branch
Death of Jacob Coppock
Jacob Coppock, mention of whose death was made in last week’s Leader, was born January 13, 1843, in Miami County, Ohio. He remained there, working on the farm and attending the common school until a young man and in 1862 he enlisted in the Eighth Ohio Cavalry in the Civil War. He served under General Hunter and General Sheridan and was in the battles of Harper’s Ferry, Winchester, Cedar Creek, Lynchburg and others. He was a cousin of the Coppock who was with John Brown at Harper’s Ferry. He spent four years in the service.

He was married December 29, 1864, to Margaret Tucker, a native of Ohio and who survives him. In 1867 they moved to Virginia County, Illinois, locating on a farm and later he came to Iowa locating on a farm near Henderson. In 1880 he retired from farm life on account of ailments contracted in the army and moved into Henderson where he has since made his home.

He was the father of ten children, four boys and six girls. Three of the girls, Frankie, Ida and Ollie preceded him in death, the others survive him. The wife and four sons were with him during his last hours, when he passed peacefully away during Saturday night, May 24.

He was a member of the Quaker church and tried to live up to its teachings, and was well liked and highly respected by all who knew him.

The funeral services were held from the Methodist church Tuesday afternoon, May 27, and were conducted by Rev. Mr. Barton, the pastor. The pall bearers were all soldiers of the World War, Marion Sowers, Sam’l Phelps, Arthur Phelps, Ray Huntsman, Wm. Huntsman, Jr. and Walter Coppock.

The seven children were present at the services: Rollings, Albert, Lyman and Walter Coppock of Henderson, Mrs. Clara Huntsman and Mrs. Amy Huntsman of Emerson and Mrs. Maude Bryant of Grant. He was laid to rest in the Farm Creek cemetery near Henderson.
City of Henderson, Iowa
Henderson Community Building
310 Maple Street
Henderson, Iowa 51541
1 (712) 825 5151
henderson.city@gmail.com