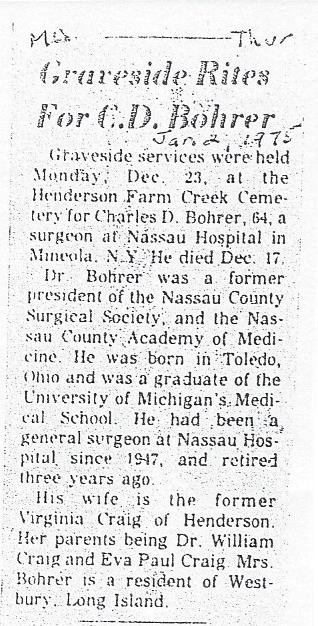 Graveside services were held Monday, Dec. 23, at the Henderson Farm Creek Cemetery for Charles D. Bohrer, 64, a surgeon at Nassau Hospital in Mineola, N.Y. He died Dec. 17.
Dr. Bohrer was a former president of the Nassau County Surgical Society, and the Nassau County Academy of Medicine. He was born in Toledo, Ohio and was a graduate of the University of Michigan’s Medical School. He had been a general surgeon at Nassau Hospital since 1947, and retired three years ago.
His wife is the former Virginia Craig of Henderson, her parents being Dr. William Craig and Eva Paul Craig. Mrs. Bohrer is a resident of Westbury, Long Island.
City of Henderson, Iowa
Henderson Community Building
310 Maple Street
Henderson, Iowa 51541
1 (712) 825 5151
henderson.city@gmail.com